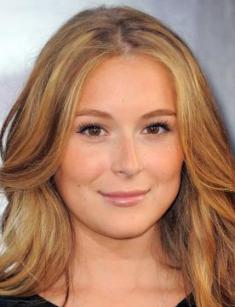 Alexa PenaVega is an American actress and singer, starring in the Spy Kids film series. Alexa was born on August 27, 1988, in the seaside resort of Miami, the U.S. state of Florida, in a family of a Colombian man and an American woman. The girl became the first of seven children. After the birth of Alexa, the family had daughters Makenzie, Margo, Krizia, Greylin and brothers Cruz and Jet.

The mother of the children, Gina Rue, worked as a model, so the older Alexa and sister Mackenzie in early childhood had a dream of working in the entertainment industry. Shortly after the divorce, the mother of the future actress moved to Los Angeles, California with the children and her second husband. At the new place, Gina got a new job – at a travel agency.

Thanks to the efforts of her mother Alexa Vega appeared on the screens at the age of three for the first time. As a child, Alexa appeared in the role of Emily Newton in the T.V. drama Evening Shade, which was broadcast for four years. Thus began the creative biography of the young actress. The directors noticed the girl, and in just the next three years the baby starred in the T.V. shows Chicago Hope, ER, Giant Little Ones, She's All That, Nine Months, The Glimmer Man, Ghosts of Mississippi.

In 1996, the girl appeared in the film Life's Work, where she played the role of Tess Hunter, the main character in childhood. Three years later, she appeared in the main cast of the drama The Deep End of the Ocean, where the leading roles were played by Hollywood stars Michelle Pfeiffer, Treat Williams, and Whoopi Goldberg.

The real glory came to Alex in 2001, when the young actress was in Robert Rodriguez's trilogy Spy Kids. She got the part of Carmen Cortez.

The film was about a married couple Gregorio and Ingrid Cortez (Antonio Banderas and Carla Gugino), who fell under the suspicion of the murder of other spies of the Agency. The spy kids, Juni Cortez (Daryl Sabara) and Carmen Cortez helped their parents to conduct an investigation and restore justice. The first part of the trilogy grossed $ 150 million, after which the creators began filming the second and third parts. The performers of the leading roles immediately rose to the top of Olympus of glory.

Petite Alexa Vega, who is only 5 feet tall and weighs 105 pounds, two years after the release of the third part was recognized as the sexiest young actress of the year, according to the magazine Vanity Fair. At this time Alexa Vega tried herself on the theater stage. The musical Hairspray with the participation of the girl started on Broadway in the early 2000s. Alexa played the role of Penny Pingleton. The production turned out to be high-grossing, and the show lasted until 2007.

The work of Alex continued in the comedy movie Sleepover, the drama movie Odd Girl Out, the thriller film State's Evidence, the mystical series Ghost Whisperer. In the teenage drama Remember the Daze dedicated to the problems of high school students, Alexa appeared in the role of Holly.

In 2008, the actress's filmography was supplemented by a role in the popular television series The Mentalist about psychologist Patrick Jane (Simon Baker), endowed with a phenomenal ability to solve complex crimes by logical reasoning.

Such a significant project was followed by the shooting of the actress in the series Royal Pains, Broken Hill, From Prada to Nada, Big Time Rush. In 2010, Alexa appeared before the audience in the role of the main character, Ashley, in the criminal action movie Innocence. In the thriller movie Mother's Day, the shooting of which followed Innocence, Alexa appeared in a supporting role.

A year later, the work of the actress continued in the romantic comedy movie From Prada to Nada, where the girl appeared together with Camilla Belle and Tina French. The plot of the film revolved around two sisters who after the death of their wealthy father had to say goodbye to luxurious life and move to a poor neighborhood to live with a strict aunt. But suddenly each of the girls found their true love there.

In 2012, Alexa starred in the teenage horror The Devil's Carnival which tells the story of five students exploring an abandoned tunnel on Halloween. In the same year, the actress auditioned for the T.V. series Nashville that later became a hit. The audience loved the story of the urban area, which focused on recording studios of country musicians.

No less impressive in the performance of Alexa Vega are the roles played in the science fiction action movie Bounty Killer and the popular television series The Loud House. In 2014, the actress starred in the box office thriller Sin City: A Dame to Kill For. Mickey Rourke and Jessica Alba played the leading roles.

Alexa Vega was married twice. The first husband of the actress was a film producer Sean Covel, with whom she went down the aisle in South Dakota, in October 2010. The marriage was short-lived; in 2012, the young people already parted by mutual consent.

Shortly after the divorce, Alexa turned her attention to the young artist Carlos Pena. It was a whirlwind romance; the young people immediately began to live together. In 2014, registration of marriage took place; both newlyweds changed the name to a "mix" - PenaVega.

The solemn event was held in the Mexican city of Puerto Vallarta, on the Riviera Grand Velas. Sean Covel also hurried to congratulate his ex-wife, who wished the newlyweds long life and the birth of tall children, in a joky way hinting at the height of Carlos and Alexa.

The Penavega couple did not make everyone wait for a long time and already in mid-2016, the admirers of the actress noticed that the girl was pregnant. In December of the same year, the family had a son – Ocean King PenaVega. Alex PenaVega does not hide her family members from fans and often posts joint photos with the child and her husband on her Instagram account.

Alexa Vegas's net worth is estimated to be around $16 million. In 2016, the actress pleased her fans with the work on a comedy project Ms. Matched. She got the part of a joyful wedding manager who dreams of finding her soul mate. Fate brings the girl with the writer Ben Reynolds (Sean Roberts), who is an ardent opponent of the magnificent celebrations organized on the occasion of weddings.

In 2017, another film featuring Alexa Vega, Destination Wedding, saw the light of day. In this movie, the actress worked on the same set with Jeremy Guilbaut. Now Alexa is working on a new project –the thriller film Dweller in which she will act as a student psychologist, who has to fight with the essences of serial killers, settled in the hometown of the girl.