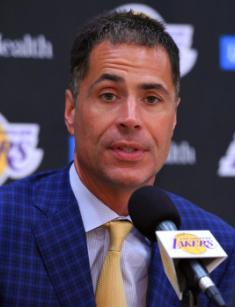 The athlete has a long and very prolific career. He is famous for his prominent game and sparkling wit. Besides hard work on the ground, he managed to get a good education and continued to be on the right height as a splendid manager.

There is little information about his family background. His father is a former high school basketball coach; it is up to him who taught Rob the fundamentals of basketball. To become a sports agent, he graduated a school of business and studied law at a university.

His game for a high school was highly appreciated, media broadly considered him as one of the best players. Pelinka was regarded as one of the best shooters of Chicago and led his team to the first conference championship. At the same time, he played in pro-amateur leagues in Chicago. His senior seasons Rob played at the point guard position.

Thanks to his prolific game Rob was included in TOP 50 Chicago High School Players. In 1987 he made all 41 of his free throws and recorded a tournament record 139 points, including 45 in one game. Thanks to his beautiful game he was included in various all-star lists. After his tournament performance, three most influential schools showed interest in him. Rob chose Michigan for his further career because of its strong law and business school.

After high school graduation, the athlete played basketball in Michigan for four years, 1989-1993. Here the player was surrounded by famous athletes. His colleagues were Jalen Rose, Chris Webber, Juwan Howard, and others, known as the Fab Five.

Rob became a role player, and as media underlined he wasn’t one of the Fab Five, he was a unique player. Comparing with other sophomores played for the University of Michigan Pelinka could not boast of shiny statistics and highlight-reel moves, but the player put up impressive numbers. Pelinka played 36 games for Michigan averaging 4.3 points, 2.1 rebounds and 1 assist per game. During his senior season, the athlete was an important role player for the team who drew the most charges and contributed important defensive minutes as the sixth man.

After his senior season, he played in an NBA Summer Camp in Long Beach, California and considered offers to play professionally in Europe. At this time, he first met sports agent Arn Tellem and decided not to play basketball anymore.

In 1996 he graduated from the university and got a license to practice as a lawyer. He became a member of the company Mayer Brown, after two years of practice, Rob became a sports agent. As an agent, he had over 25 clients in the NBA, Kobe Bryant among them.

Then he was a president of a prolific sports agency. Rob underlined that the main goals of his work were to guide and support players and their families. The list of his former clients highlights Kevin Durant and Carlos Boozer.

In 2017 he became general manager of the Los Angeles Lakers and signed the five-year contract. That time the Lakers hired Magic Johnson as executive vice president.

In 2018 Magic Johnson resigned. He said that Rob was one of the men who backstabbed him. Rob commented his words as "simply not true." Johnson was an essential figure in the Lakers' recruitment of LeBron James.

Johnson's resignation caught the Lakers by surprise and born many discussions. Thus Fox Sports analyst Ric Bucher supposed that there were some emails between Rob and Jeanie Buss. There were critical words about Magic Johnson, which, as a result, Magic saw.

In 2017 the Lakers were strengthened by Kentavious Caldwell-Pope, best known as KCP, who signed a one-year contract with the team. During the introductory press conference, Rob gave a precise metaphor about the new player.

Rob's net worth is about $13 million.

Rob's wife, Kristin, is a pediatrician. They have two children.

The sports agent is famous for his appearance. Thus many people underline that Rob looks like the actor Rob Lowe.

On his twitter, Rob published another answer about his uncanny resemblance to the actor.