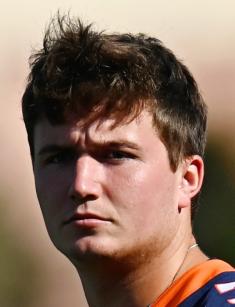 The Columbia native, Drew Lock, started a football career in NFL in 2019, as a rookie of Denver Broncos. He became the 42nd number of 2019 Draft after graduation from the University of Missouri. He plays at a quarterback position. Lock’s net worth is roughly estimated at $1 million, including all of his properties and earnings.

The birthplace of Andrew was Columbia, Missouri. He was born to his parents on November 10, 1996. He grew up in a sports family, as his dad and grandpa were football players. So, all of his childhood, Drew spent developing football skills. Although the family lived in Columbia, the boy studied at Lee’s Summit local school.

As a prospective football youngster, Andrew was invited to the Elite 11 quarterback camp in Beaverton, Ore, in summer 2014. He was one of head coach’s ten favorite kids, with whom the coach had ever worked. Trent Dilfer called Lock a tremendous young man, who had that presence to him that’s more important than his talent. Drew was a leader of men, and he was going to have tremendous influence not just on the football field but in life.

A few minutes after Lee’s Summit High School Coach Eric Thomas had whistled for the final play of Lock’s high school career, the quarterback was still slinging passes to wide receivers. Answering a question about the idea of the perfect quarterback, Thomas said that he found all the necessary features in Andrew. Thomas marked quarterback’s rocket arm, intellect, and athleticism.

As a senior Columbia native threw for 2,717 yards and 28 touchdowns in only ten games. He was named The Star’s All-Metro football player of that year. Six of those ten games came against state-ranked teams in Missouri, which made his efficiency all the more striking. And Lock, who has committed to Missouri Tigers, put up those numbers against defenses who knew exactly what was coming. He accounted for only 12 carries per game. Nevertheless, Lock threw nearly three touchdowns per game.

Thanks to those numbers, Lock won the Simone Award. After that, he reported that would never forget his time at Lee’s Summit. It had been a great ride. Drew thought it prepared him for the next level. He couldn’t wait to get to Missouri and compete there.

"I'm glad that the helmets have evolved from that one," Drew said. "But, no, it definitely means a lot to me to be able to say that I'll be able to play for the team that my dad played for and to walk on the field and my dad walked on it too, which is, you can't get that in very many places and not other many people get to experience that."

While Drew had been verbally committed to Missouri for a while, he made it official signing his letter of intent on National Signing Day. His father, Andy, could not hide his pride. His dad said their family could not be happier with Drew's selection, especially since it will allow them to continue attending his games, given that he plays about a two-hour drive from home.

By the end of his freshman season, Drew became the Tigers’ starting player. He scored only four touchdowns for 1332 passing yards and 129 passes completed out of 263 attempts. The next season things went better. In 2016 Lock was one of ten best players of SEC, as a leader in total passing yards and other numbers. He made 12 starts in 12 season games, scoring 237 passes completed with 23 touchdowns.

It was not the limit of his abilities, and in 2017 season, Drew led the Tigers to the Bowl game. He almost doubled the number of touchdowns and completed 44 in 13 games, adding 3964 passing yards and 242 successful passes. The great achievements of Drew allowed him to get to the First-Team NCAA. The popularity of the player spread all over the country, and the highlights of Lock’s playing became often viewed.

The University of Missouri even ran a promotion where they were giving a Drew Lock bobblehead to season ticket holders. Lock started 46 games over four seasons at Missouri, tossing for 12,193 yards and 99 TDs to 39 INTs over his collegiate career.

The Broncos’ chiefs made a splash in the second round of the 2019 NFL Draft. Denver selected offensive lineman Dalton Risner and quarterback Drew Lock with the 41st- and 42nd-overall picks, respectively. The Broncos traded the 52nd-overall, 125th-overall, and 182nd-overall picks to Cincinnati to move up to the 42nd pick and select Lock.

On July 17, 2019, Drew Lock signed a four year $7 million contract with the Broncos, including a $3.1 million signing bonus, $3.9 million guaranteed, and an average annual salary of $1.75 million. However, the rookie injured his right thumb during a 24-15 preseason loss to the 49ers on August 20. After the game, Lock said that he has gotten out of the pocket and just ended landing on that thumb. It was just a little sprain; it should be all right.

Soon, the good news came out of the club. No surgery was required on Lock’s hand, but the player was set to miss the entire preseason due to the ailment. On September 1, Denver placed Drew and some other players on injured reserve in corresponding roster moves. In November, Lock returned to training, and on November 30 the Broncos activated rookie off injured reserve and waived rookie quarterback Brett Rypien.

On December 1, Drew Lock made his debut start and became 11th quarterback in the NFL to make their first career start that season. His first drive was a three-and-out, but then he discovered Courtland Sutton. The Broncos’ 2019 second-round pick hooked up with their 2018 second-round pick in the end zone twice in just more than four minutes to give the Broncos a 14-0 lead. However, in the second half, he quieted down, completing just 6 of 9 passes for 11 yards and an interception.

Arguably, the most exciting aspect of Lock's debut was the realization that the best was yet to come. The Denver Broncos' 23-20 victory over the L.A. Chargers in Week 13 was Lock's first career start, but the promise he showed in his debut had fans buzzing. On December 3, Broncos wide receiver Courtland Sutton joined CBS4 sports anchor Michael Spencer at the ViewHouse Centennial for Xfinity Monday Live.

He had two touchdowns in the victorious game and said about Drew:

“He came in and he played with some confidence and some swag. It was awesome to see him put together what he put together. He could be the future. He has the potential to be that guy for a long time here.”

Drew keeps his personal life in secret and there is little information about his relationships. But he is dating Natalie Newman.