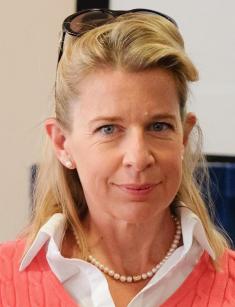 She is a British columnist and media personality. Hopkins proved to be a very controversial person who repeatedly came under scrutiny.

She was raised in Devon, the United Kingdom. Katie's mother worked as a banker, and her father was an electrical engineer. Katie has got an elder sister. As to education, the columnist studied economics in college. She also obtained military training but didn't serve in the army due to her epilepsy. Her deceased had been discovered during her passing out.

In 2006 her career on the screen began after her starring in the competition program. That time Katie worked as a global brand consultant.

She appeared on the British show "The Apprentice." Her controversial behavior attracted much attention as well as recognition, thanks to her criticism of fellow contestants and back-stabbing attacks. Katie didn't come into the final as she left the program due to childcare issues. Katie worked at the Met Office, but after the show, she lost her position due to her behavior on the television competition. She also hadn't passed the probationary period.

After her dismissal, she appeared on several British programs, among them "8 Out of 10 Cats" and "Loose Women." Katie took second place in the show "Celebrity Big Brother." During her guest-starring on the TV projects, Katie maintained her aggressive and argumentative conduct. To take part in the reality show "My Fat Story," the media personality gained three stones, and then she was losing that weight for six months. Her process of losing spare pounds was recorded on camera to show that obesity could be controlled. In 2007 she also took part in “I’m a Celebrity. Get Me Out of Here!”

The media personality had a chance to host her show "If Katie Hopkins Ruled the World," however, the program had been canceled after the first series due to low rankings. In 2016 she worked as a radio host of the morning show. After her comment on social media about the Manchester Arena Bombing, the radio station fired her. Katie also focused her attention on the job of the columnist. She worked at well-known publications.

The columnist raised diverse issues among them people with dementia, migrants, Scottish people. She often stood up as an outspoken figure and was widely criticized. One of the most candid comments of Hopkins is her words "we need a final solution," referring to the bombing in Manchester Arena. As the Nazis initially used the term "final solution" for the Holocaust, the public was shocked by her choice of words. Then the columnist removed the word "final" on "true."

The media personality is also known for her feuds with celebrities. Thus, in 2013 she sent a tweet about the singer Jesy Nelson. When that tweet was shown in the documentary, Jessy’s boyfriend defended her in the verbal feud with the columnist on her Twitter account.

The 44-years-old Katie has got an account on Twitter where she identifies herself as "Milo's Mum. The Female Farage. Angry Ellen de Generes. The Biggest Bitch in Britain." She proved to be a somewhat controversial commentator with provoking statements in social media. However, her outspoken views attracted widespread attention. Several outspoken views of Hopkins were re-tweeted by Trump; that fact made her much more famous. Thus, her account has more than one million subscribers. Several campaigners called the platform to remove her account for using hate speech. All her tweets were deleted; the social network hadn't given any comments about it. In 2015 she took part in the CBB disco, where she was dancing. That time Cami twerked on her and Perez ground on Katie. The video got a bit weird.

The columnist’s thoughts about child names shocked many people. The video where she told names Tyler and Charmaine are names for working-class children gathered more than 10 million views on YouTube. The media personality claimed that her kids were not allowed to play with kids which names are Tyler and Charmaine. It’s worth mentioning that the columnist has got three kids named India, Poppy, and Maximillian.

Cookery writer Jack Monroe began a legal campaign against the columnist when she mistakenly accused him of vandalizing of a war memorial. As it turned out, she confused the cookery writer with the journalist who wrote an article in support of vandalism. Later Hopkins admitted her mistake. Nevertheless, she hadn't apologized. The cookery writer was awarded £24,000 in damages and £107,000 in legal costs. The appeal application was refused, and the columnist had to sell her family home to pay the legal fees.

The other legal issue is connected with the Mahmood family who went to the USA to visit Disney land and were stopped due to their visas were canceled in 2015. A year later, after that incident, the columnist wrote two articles where she claimed that the Mahmoods were extremists. The Mahmood family issued a libel case and gained £150,00 in damages. The articles were removed from the website. She also blamed a teacher for taking her class in a protest against Trump. The publication had to pay substantial damages to the columnist's mistake.

In 2009 she stood up as an independent candidate for European Parliament Election. The columnist took 0,6% of the total votes cast. She repeatedly took part in the conferences of the British party. In 2015 the party announced that her applications to become a member of the party had always been rejected. That year she visited Brunel University to take part in a debate. The students turned their backs to express their protest at her presence on the debate. The columnist dressed like Boris Johnson to help promote Global's Make Some Noise Day.

She met her first husband when he was married. The columnist confessed in dating with him and having an extramarital sexual relationship. They were married in 2004. She gave breath to her daughter soon. In 2005 her husband abandoned her to date another woman. The columnist met her second husband working at the Met Office. That time he was married too. In 2010 the coupe married; their relationship was recorded on camera for the reality show.

The columnist suffered from epileptic seizures. In 2016 she underwent surgery to remove the part of the brain and to relieve her condition. Even though the operation was successful, it brought complications. In January 2020, the columnist was pranked by the blogger who invited her in Prague to receive an award. Her net worth is estimated at $4 million.