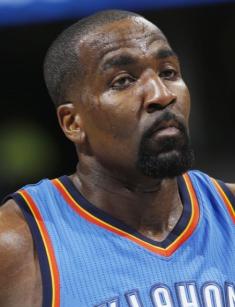 Kendrick Perkins is a former basketball player and the winner of the NBA Championship. After retirement, he found himself as an analyst and started collaborating with ESPN.

The future basketball star was born in fall 1984 in Texas. The boy’s mother died when he turned five; the father played pro ball in New Zealand and never returned to his son. Thus, little Perkins was brought up by his grandparents, who lived on a farm.

Kendrick and active and energetic child; he was fond of sports and played football, baseball, and basketball. The would-be athlete attended a Catholic school and served as an altar boy.

The young man’s talent was notable from the very beginning. He went to Clifton J. Ozen High School and helped its team participate in four local tournaments and a state event. Perkins was going to continue his education and join Memphis, yet he chose to participate in the NBA draft at once, without playing on the collegiate level.

Although the Memphis Grizzlies selected Kendrick in the 2003 draft, they immediately sold him to the Boston Celtics. There were no particular achievements during the early seasons, but the athlete started shining brighter soon.

In 2006, he was among the starting members and top scorers; the Celtics celebrated the NBA Championship triumph in 2008. However, a knee injury interrupted his chain of successful matches for Perkins; he returned in February 2011 and participated in the game against the Dallas Mavericks, and his results were as good as before.

In 2011, the sportsman joined the Oklahoma City Thunder. Many experts expected the team to win the NBA title, but the Miami Heat surpassed them. Another NBA final happened with the Cleveland Cavaliers.

Kendrick did not have much time with the New Orleans Pelicans due to trauma. Reluctant to retire, he spent the last season with the Charge and Cavaliers.

As soon as Kendrick finished his field career, he decided to switch to TV analyst work. Today, he collaborates with ESPN and Fox Sports 1.

In one of his interviews, the former center told journalists he liked the idea of becoming a coach, but it was not to happen in the nearest future.

Before the sportsman married Vanity Alpough, he was dating her for a long time. The first son, Kendrick Perkins Jr., was born in September 2007. The wedding ceremony took place two years later in the Woodlands.

The second son, Kenxton, was born in October 2011. Today, Kendrick, his wife, and the kids live in Tomball, Texas.

At the beginning of 2020, Perkins was quite harsh on his former teammate Kevin Durant: the former athlete accused him of leaving Oklahoma for the Warriors on Twitter. He apologized later, when the news about Kobe Bryant’s death came up, and wrote:

Kendrick Perkins’s net worth is $18 million in 2020. Overall, his career earnings are $60 million.