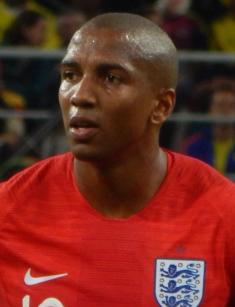 The home of football is good old England. Teams from the UK are considered to be among the strongest on the field. The national team has become a world champion several times in the history of this sport. Ashley Young is one of the most successful players, and his career develops not only in the legendary Manchester United but also in the national team.

The footballer's biography starts on July 9, 1985, in the English town of Stevenage near London. The parents of the future winger are originally from Jamaica.

The male half of the Youngs (father and three brothers - one older and two younger) are fans and football players. His father preferred Tottenham, and Ashley himself was a fan of Arsenal. The boy's idol was Ian Wright.

In his hometown of the footballer, special attention was paid to work with young people, so many talented young people were engaged in educational institutions. For instance, the famous car racing driver Lewis Hamilton attended the same school as Ashley. By the way, for the time being, Young was jealous of the race man's success and preferred not to comment on his achievements in the interview.

As a child, Ashley made up his mind about his future career. The boy hadn't seen himself anywhere but the football field. When the teacher asked the graduate what he planned to do after receiving his certificate, he did not hesitate to answer that he would be a player. Young did not see any alternatives for himself.

It`s no wonder because every free minute the brothers spent playing with the ball. When the ball wasn't there, there were rocks or other improvised items in play. Ashley remembered that at first, the boys scored goals into improvised gates using a sofa. However, after the young footballer broke the swan's ornamental figure, his mother firmly forbade him to appear with the ball in the house.

Young's hometown had its football school. However, Ashley turned out to be a trainee of the Watford academy, located closer to the capital. The first punch for the ambitious 16-year-old boy was the club's refusal to sign a professional contract. Then Ashley, according to him, realized that it was a turning point in life, and to achieve the goal, it was necessary to fight.

Eventually, Young got what he wanted. The coach of the youth team recommended the student to the Watford's manager. In 2003, the footballer made his debut on the field playing for Watford. In the first match, Young sent a goal into the gate of the opponent Millwall. In the first season, the Englishman is more likely to replace players, but next season he played in the starting lineup.

Even though in the 2004-2005 season Young couldn't boast notable goals, he won the club prize called Young Player of the Season award. Next season, under the guidance of coach Aidy Boothroyd, Ashley changed his position on the pitch and became a striker and right-winger.

The young sportsman's success did not go unnoticed, and in 2007 the management of the club received several offers to transfer Young for £5 million. Management accepted the £10 million offer from West Ham United. This time, however, the player refused because the team was on the verge of leaving the Premier League.

The Englishman changed the club in 2007 and then wore an Aston Villa uniform. In 2007/2008 season the sportsman repeatedly took the title of the player of the match. Active work on the field was marked by a call-up to the national squad. In the club, the player returned to the usual position of a winger and also played as a wing-back.

In 2011, the press covered the news about Young's signing a contract with Manchester United. According to The Independent, the management paid £17 million for the winger, and the player's salary was over £6 million a year. According to the information found in other online resources, Ashley Young has a net worth of $9 Million as of 2019.

In 2016, Young left the team for a long time due to a groin injury. The player needed surgery and a timeout during the recovery period. Fortunately, everything ended well, and the winger, after a course of rehabilitation, returned to the field as one of the Manchester United players.

Since the date of the first debut for the national team in 2007 in the qualifying matches for Euro-2008 against Russia and Israel, Young steadily went on the field in honor of the country. The player appeared on the pitch as a starting line-up in 2010.

Ashley scored his first goal against Denmark in 2011. A few months later, he repeated his success by scoring a goal during a match against Switzerland.

At Euro 2012, he got into the starting lineup and participated in all games of the national team at the championship. Unfortunately, in the quarterfinals, during the game against Italy, Young could not implement the penalty shootout in the post-match series, and the team eventually left the tournament.

The sportsman had known his wife, Nicky Pike, since high school. The young people love each other with devotion. The wife often accompanies her husband to matches and championships, supporting his fighting spirit and cheering on the stands.

The couple prudently prefers not to share details of their personal life. It is known that after a long relationship, the lovers set a wedding date in 2011. However, at the last minute, 48 hours before the ceremony, the groom canceled the event without giving any reasons. Anyway, Young's family managed to solve all the problems, and the wedding took place in 2015 in Buckinghamshire.

The couple has two children. The oldest son, Tyler Jay, was born in 2006, and the daughter Ellearna Ruby was born in 2009. The son followed in his father's footsteps and is trying to build a career as a professional football player. In 2014, Nicky tweeted a post about the boy signing a contract with Arsenal, whose fan as a child was Young Sr.

Ashley, who makes millions of pounds a year, loves his mother's cooking. The sportsman confesses that he sometimes asks to send meals cooked by his parents, and confidently argues that the money spent on delivery is worth it.

Ashley is also a tattoo fan. On the Instagram page, the player, apart from numerous photos of the team, posts videos from tattoo parlors. And in 2018, Ashley starred in a Chevrolet ad where a sportsman's autograph became a tattoo on a fan's hand.

Ashley Young, in addition to his undeniable talent and career prospects, occasionally demonstrates a tense and passionate temper on the field. For example, in October 2017, the winger fought with Tottenham's midfielder Dele Alli.

The quarrel ended with a scuffle and a sarcastic request from the Manchester player to let him known when the opponent would win the English championship.

In early 2018, Ashley was disqualified for three games for being rude on the field against Southampton. Young deliberately elbowed midfielder Dušan Tadić, for which he was punished.

Despite the problems associated with the player's character, Young remains a talented and effective player on the pitch. In 2018, the winger extended the contract with Manchester United.