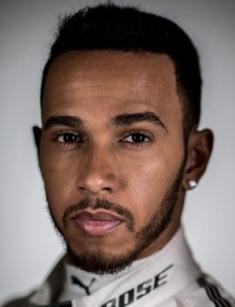 Lewis Hamilton is a British racing driver who races in Formula One, the pilot of the team Mercedes-AMG Petronas Motorsport, three-time world champion.

Lewis was born on January 7, 1985, in Stevenage, Hertfordshire, England. Lewis is mixed-raced, which contributed to his unique appearance. His mother, Carmen Larbalestier, was a native white Englishwoman, and his father, Anthony Hamilton, a black Britt, whose ancestors came from Grenada.

When the boy was two years old, Carmen and Anthony filed for divorce. Lewis remained with his mother. Carmen married a second time and moved to London, and the future racing driver found a stepfather and two stepsisters, Nicole and Samantha. Despite moving away, the boy did not stop communicating with his father, which influenced his future destiny and choice of profession.

At the age of twelve, Lewis returned to Hertfordshire to his father, who loved the little boy with all his heart. That was how the boy got new relatives, a stepmother, Linda, and a younger half-brother Nicolas, who had cerebral palsy. At the age of five, Lewis received a fantastic gift from his father, a radio-controlled car. And a year later, he already won second place at the "adult" competition among the owners of remote controlled vehicles.

His father seriously thought about his son's future. In the same year, Lewis became the owner of a real karting car, it was used, but still expensive for the salary of a company manager. Lewis received a karting car on one condition: that he would do well at school, and so the boy tried his best. As a teenager, Lewis was interested in playing football, and, if it were not for car racing, he would become a famous football player, for sure.

Anthony Hamilton, seeing in his son the makings of a brilliant driver, devoted all his free time to training and the career of the guy. He resigned from his previous position, got a job as a contractor in a construction company and worked three jobs at once to pay for his son's expensive hobby, as well as to afford the medication and proper care for the sick younger child.

Eight-year-old Lewis won the Junior championship in karting and had since won one competition after another. When he was ten, after another triumph, the boy plucked up the courage to ask for an autograph from Ron Dennis, the boss of the McLaren Formula One team. At the same time, Lewis announced that soon he would be sitting behind the wheel of his car. Dennis listened to the self-confident young man with a smile, gave him an autograph and said that they would undoubtedly meet in nine years. And so it happened.

At the age of twelve, Hamilton won an award in the Junior Yamaha series of races, for which he was awarded a place in a special program to support young drivers, McLaren Mercedes. This was followed by competing in and winning the series Intercontinental A, Formula A, Formula Super A.

In 1998, Lewis met Ron Dennis again, taking a well-deserved place in the McLaren team. Three years later the guy was lucky enough to participate in the karting races in the company of Michael Schumacher and earn the highest praise and approval of the famous racer.

Schumacher noted that despite his young age, Hamilton would probably soon take part in the legendary Formula One race.

In the period from 2001 to 2007, Hamilton had many victories in races of all sizes and championships.

In 2007, Lewis Hamilton made his Formula One debut with the McLaren Mercedes team. His partner, the Spaniard, Fernando Alonso, was a more experienced and mature racer. For a while, the men worked smoothly, but soon ambitious Lewis surpassed his colleague. It became the cause of several conflicts between the guys.

These disagreements were the reason for numerous attacks on Hamilton by Alonso fans, which wore a frank racist connotation. Fernando himself openly condemned the actions of his fans, but the irreconcilable rivalry between the leading racers remained.

Hamilton's biography as a pilot of Formula One car is full of bright victories and unexpected turns of fate. To some extent, Lewis himself provokes conflicts with other racers and team members by making use of prohibited underhand methods.

In contrast to the strained relations with Fernando Alonso, Hamilton and Nico Erik Rosberg share a strong friendship, even though for a couple of years now, these two Mercedes pilots have been the closest rivals in the fight for the Championship. In 2016, Rosberg finally beat Hamilton to the highest score.

In 2008, 2014, and 2015 Lewis Hamilton became the ultimate champion and added the deserved titles to the list of his victories and awards. He almost caught up with Ayrton Senna and Michael Schumacher.

Lewis Hamilton, the leading pilot of Mercedes team on the Formula One, is an eligible bachelor. The young man had already made a good fortune, fully recouping his father's investments in his career. Besides, he has a pleasant appearance with a height of 5 feet 7 inches, and he weighs 152 pounds and is already known for his affairs with famous models and singers.

From 2007 to 2015, Lewis went out with the beautiful and talented singer, Nicole Scherzinger, the couple even planned to have children, but the relationship did not work out in the long run. Joint photos of Lewis and his girlfriend were shining from the covers of various tabloids for a long time, as well as on the celebrities' accounts on Twitter and Instagram. After numerous break-ups and make-ups, the stars finally decided to give up their relationship and move on.

After breaking up with Nicole, for a short period, the racer had a love affair with a top model of Hungarian origin, Barbara Palvin, then he was seen in the company of Rihanna. Hamilton was said to have had a relationship with Gigi Hadid, Kendall Jenner, Irina Shayk, and other models. In early 2017, the star of Formula One was caught on camera with Sofia Richie, the eighteen-year-old daughter of Lionel Richie. The couple met in one of the restaurants of Beverly Hills, trying not to attract the attention of the public and intrusive journalists.

Because of the notorious paparazzi in 2012, Lewis Hamilton moved to permanent residence in Switzerland, making a company to Schumacher, Alonso, and other car racing champions. Lewis settled in the same house with a longtime teammate and rival Nico Rosberg.

Lewis Hamilton's net worth is estimated to be a staggering $285 million (£218 million).The affair with young Sofia Richie does not prevent Hamilton from doing what he enjoys. The latest news suggests that now the famous racing driver is preparing for the next season of Formula One and testing new cars for the team.

Lewis was always sure that he would reach the top. Now his plans include breaking the records of his idols, Ayrton Senna and Michael Schumacher. Hamilton feels that in the Mercedes he has already achieved a lot, but is not going to stop. The young man wants to try himself in other areas. Thus, Lewis claims that he wrote several dozen songs and is going to arrange them in an album.

The driver does not hesitate to pose in front of the cameras, showing his athletic body and numerous tattoos. He is engaged in charity, helping children with various diseases, and is considering releasing his is own line of clothing.

In 2007, Lewis Hamilton wrote and published his autobiography, also participated in the filming of videos and documentaries dedicated to the championship Formula One, and voiced a character of the cartoon Cars.