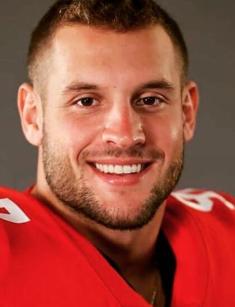 Nick Bosa is an American football star. He's a defensive end for the San Francisco 49ers of the NFL.

The future celebrity was born on October 23, 1997, in Fort Lauderdale, Florida.

Nick's mom's name is Cheryl. His dad's name is John. He used to be an NFL player and a member of the Miami Dolphins team. Nick's grand-uncle, uncle and cousin played for the NFL too. His great-grandfather, Anthony Accardo, used to be the head of the organized crime syndicate Chicago Outfit in the 1940s.

Nick's brother, Joey Bosa, has become a professional football player as well. His home nickname is Bigger Bear. Nick's nickname is Smaller Bear. Joey had a cameo in the final season of Game of Thrones. His brother adores this TV series. Joey and Nick attended the premier of the 8th season together.

His parents wanted the boy to try various sports disciplines. He turned out to be good at baseball, basketball, soccer, golf and tennis. However, he loved football so much that he confessed he would die if his mom and dad wouldn't allow him to stick to this game.

Nick knows how to juggle. He loves to listen to electronic dance music by Deadmau5.

Nick got an offer from the Ohio State University as a present for his 15th birthday. It was his biggest dream coming true. He was one of the most gifted sportsmen in his class.

In 2018, Nick had to take a break from football because of an injury. He had core muscle surgery. To prevent injuries, he began to practice yoga and he became very flexible.

In 2019, he joined the NFL Draft and was named NFL Defensive Rookie of the Year. The same year, he demonstrated a stunning performance by sacking Baker Mayfield twice. He signed a $33.5-million contract with the San Francisco 49ers.

In 2020, Bosa had to take a break from sports again because of a torn ACL. While being placed on injured reserve, he followed a protein-heavy diet. He hired a private chef to cook the right meals. The next year, Nick came back to the field.

In 2022, both Bosa brothers wear the Vicis Zero2 Trench helmet. Nick's jersey number is 97. His stats always remain impressive. In 2019, he landed the second position in the rating of defensive players who made the largest profit selling their licensed merchandise.

Nick's current marital status is "single". In 2021, he began to date Jenna Berman — an actress, model and influencer of South African descent. She hasn't become his official wife yet. Probably, the couple will tie the knot in the future.