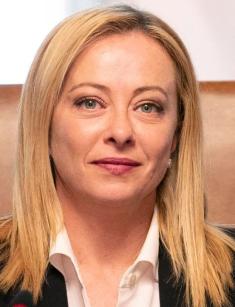 Giorgia Meloni is an Italian politician. In 2022, she became the first female Prime Minister in her homeland.

Giorgia was born on January 15, 1977 in Rome. She spent her early years in a working-class district where her grandfather lived.

Her mom's name is Anna Paratore, she's from Sicily.

Her dad's name is Francesco. He used to be a tax advisor. He left his wife and kids in 1988. In 7 years, he was sentenced to 9 years in Spain for drug trafficking.

Giorgia has a sister named Arianna, born in 1975. Her husband became the Minister of Agriculture after Giorgia was appointed the Prime Minister.

In the institute, she specialized in foreign languages.

She's a fan of J. R. R. Tolkien. She used to be a vocalist of the far-right folk band Compagnia dell'Anello, which translates as The Fellowship of the Ring.

Giorgia has been politically active since 1992. She joined a neo-fascist political party called the Youth Front, which was dissolved in three years. Later on, she helped to coordinate various student movements and protests.

In 1998, Meloni won the primary election. She spent four years serving as a councilor of the Province of Rome. During that period of her life, she earned her daily bread working as a nanny, waitress and bartender.

When Meloni became the Prime Minister in 2022, many people got worried. They thought she would try to turn Italy into a fascist state. Giorgia thinks Mussolini was the best politician in her homeland in the last five decades. She mentions the old Italian fascist slogan "God, fatherland and family" in her speeches. However, Meloni accentuates the fact that her current beliefs don't mean taking a step back in history. She allegedly advocates a more modern and moderate ideology.

She supports Taiwan and criticizes China. She believes in the power and importance of NATO. Previously, she thought Italy could benefit from withdrawing from the eurozone.

Until 2022, Meloni used to approve of Vladimir Putin's policies. In her autobiography book, she stated that this politician stood for Christian identity and European values. After the Russian-Ukrainian conflict broke out, Giorgia switched to Atlanticism.

Meloni has developed a curious stance toward feminism. She thinks women need to be empowered. But she considers the feministic movement an ideological instrument against right-wing politics.

She doesn't like that the LGBTQ movement is becoming widespread. She wants Italy to welcome fewer migrants.

Giorgia identifies herself as a woman, a mother, an Italian and a Christian. Nevertheless, she has never been officially married. Her partner's name is Andrea Giambruno. He's a journalist and he doesn't share his better half's political viewpoints. He works for the Mediaset TV channel that belongs to Silvio Berlusconi. The couple gave birth to a daughter named Ginevra.