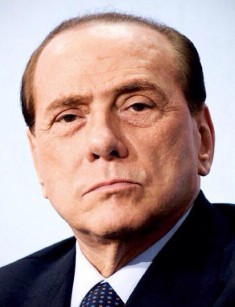 Silvio Berlusconi is the former Prime Minister of Italy and politician. Silvio was the first billionaire who managed to hold public office.

Silvio Berlusconi came from the Catholic family where traditions were respected. He was born on September 29, 1936. His father Luigi worked in a bank, and his mother Rosa was a housekeeper. Silvio had the sister Marie Antonietta and the brother Paolo.

The Berlusconi lived in one of the roughest neighborhoods of Milan. Because of the conflicts with the political forces, the family had to move to Switzerland's southern canton not far from their native city. The mother had to go back to Milan to work.

Silvio spent his school years in the village Oltrona di San Mamette. After school, he tried to work part-time: the young man milked cows at a farm and picked potatoes to provide the family with food. He received Italian yogurt as his wage. Soon after the military actions stopped, the father came back to the family.

Although the parents did not have much money, their children received the appropriate education. At 12, Silvio went to the Salesians of Don Bosco school where he was taught discipline and communication. The teenager also tried to earn: he offered his classmates help with school tasks for money or sweets.

Later, Silvio entered the University of Milan, the School of Law. The young man’s life was a whirlwind, and he had to earn his living. His entrepreneurial drive manifested itself quickly.

However, the young man got interested in photography and worked at weddings and funerals. He was also a salesman, singer, presenter, and tour guide.

In 1961, Silvio graduated from the university with honors. His final paper on ad business legal regulation problems was so successful that he received a financial reward.

Silvio Berlusconi is the entrepreneur who owns banks and publishing houses. When he was about 50, he decided to try himself in politics. In 1994, Silvio organized the movement “Forza Italia” (“Forward Italy”) that turned into a political party in 2 years. Berlusconi stood for the free market and free competition in Italy while promoting social equality based on liberty and justice.

In the Parliament elections, about 8 million voters supported Berlusconi’s party. The politician analyzed the situation and created the coalition: center-right parties joined “Forza Italia.” On May 11, 1994, the unprecedented case occurred in the Italian politics: the billionaire became the Prime Minister of the country.

In his first term, Silvio had to work hard from the very beginning. At the beginning of July, Berlusconi had the G8 summit where Helmut Kohl, Bill Clinton, François Mitterrand, and Tony Blaire were present. The Russian President Boris Yeltsin came to the summit for the first time. In October, Berlusconi and the Russian leader signed the Treaty on Friendship, Partnership and Cooperation between their countries.

In 1996, something went wrong: Silvio and his party lost the elections, and Berlusconi’s main opponent Romano Prodi won. At that time, Berlusconi was the member of the opposition and worked on the constitutional reform due to the bicameral parliament commission. At some point, people started calling Berlusconi a right centrist.

In 1999, it was evident that Berlusconi’s party was going to win. The businessman’s coalition became a real power. Thus, the governing parties lost at municipal and regional elections.

Although Berlusconi was sympathetic to the American victims of terrorist attacks, he stood against the war in Iraq. The politician tried to influence the American President George Bush Jr. but failed. At that time, Berlusconi also contributed to the establishing connections between the American and the Russian presidents.

By 2006, the Italians became disappointed in Berlusconi’s politics. He was accused of the economic stagnation, so his party was unlikely to win. Indeed, people voted for the left-centrist coalition led by Romano Prodi. Berlusconi tried to appeal against this decision, but the Supreme Court of Cassation did not meet his demands.

Two years later, the Parliament was dissolved. Silvio took part in the new elections and won. The fiscal politics became the most significant issue. Although the Italian economy was in poor condition, Berlusconi did not hesitate to cheer the people up. In all his speeches, he tried to convince the audience that the situation was not as bad as it seemed to be.

Court proceedings resulted in Silvio Berlusconi’s resignation in November 2011. The Italians welcomed this news. Vladimir Putin called the Italian leader “one of the last of the Mohicans in the European politics.”

The Italian law enforcement agencies were interested in Berlusconi’s activities. In several years, 61 court cases related to money-laundering, corruption, bribery, and sex scandals were brought against the politician and businessman.

The first problems appeared in 1992: the man was accused of having relations to the Sicilian Mafia; the judge Paolo Borsellino announced it publicly.5 years later, the investigation was closed.

Silvio Berlusconi’s frivolous lifestyle haunted the Italians. In 2011, two cases were open against the politician: he was accused of the abuse of the official authority and using the services of underage prostitutes. Not long before that, the media published Noemi Letizia’s interview where she confessed she was partying at the famous entrepreneur’s villa.

In 2012, the court sentenced Silvio Berlusconi to 4 years of prison for his tax-related crimes. The politician could not escape the justice even though numerous hearings were organized. Due to his age, the man had to serve a sentence under house arrest or on community service.

Berlusconi has been popular among women of different age. Carla Dall'Oglio became his first wife; the wedding ceremony took place in 1965. Two children were born in this family: the daughter Marina and the son Pier Silvio.

15 years later, Berlusconi met the actress Veronica Lario; the woman conquered his heart. He divorced and married again. Silvio and Veronica were together for 30 years; in 2014, they split up. The son Luigi and the daughters Barbara and Eleonora were born in this marriage.

Later, the media published some interesting facts about Berlusconi’s relationship with Raisa Skorkina. In 2011, Silvio had a new lover, Francesca Pascale, when he was still married to Veronica.

Silvio Berlusconi’s health condition is not good now. In April 2017, the politician had to be hospitalized urgently; no information about the reasons followed.

The billionaire’s life attracts cultural figures’ attention. The work on the movie about him has begun.

The politician posts the information about his life and photos from official events on his Facebook page.

The public has recently learned that the businessman allowed to sell his property after his death and asked to keep his villa in San Martino. Berlusconi’s fortune is estimated $6.1 billion.

The Italian politician is the Russian President Vladimir Putin’s friend. Silvio gave Putin an unusual present for his jubilee: the bedclothes with their photo. 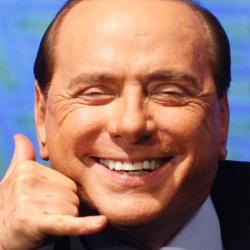