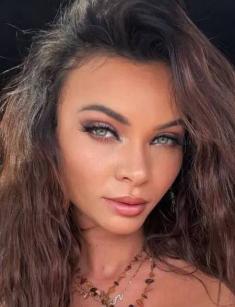 Alyssa Scott who was born on October 12, 1993 is an American fashion model, Instagram sensation and fitness enthusiast. She is also known as the mother of one of Nickelodeon star Nick Cannon's children.

The model hails from Austin, Texas. She grew up in the suburbs and studied in a private school. Her father's name is Alan, and he is a police officer. Alyssa's mother's name is Lisa Marie. We are not sure what she does for a living, but we do know that she was born in California. The model's parents are divorced.

Alyssa Scott started her career by becoming an Instagram model in 2015. After meeting comedian and actor Nick Cannon on the set of his sketch comedy show Wild N' Out, she garnered more public attention and started collaborating with such brands as FashionNova and Ignite. She also modeled for swimsuit and lingerie brands. Alyssa has over 260 followers on Instagram. Besides modeling shots, she also loves sharing photos of her children, pets and travels.

There is little known about Alyssa's personal life before Nick Cannon became her baby daddy, except that she has a daughter from a previous relationship. Her name is Zeela, and she was born in 2018. The model often shares photos of herself with Zeela on her Instagram page.

Alyssa and Nickelodeon sensation Nick Cannon started dating in 2020. The couple welcomed their first child together in June of the next year. Alyssa and Nick named their son Zen. Unfortunately, he passed away from brain cancer when he was just 5 months old. In October 2022, the model made headlines after announcing that she was expecting another child. While Nick Cannon hasn't confirmed his paternity yet, fans are sure that he is the father of Alyssa's child. The Nickelodeon alum also has 9 other children from 7 different mothers, including singer Mariah Carey and The Nick Cannon Show host Bre Tiesti. It's unclear if Alyssa and Nick ever broke up and reunited or were together since their first meeting. Regardless of the status of their relationship, Nick Cannon shared that he feels utmost respect for Alyssa as "the strongest woman he has ever seen".