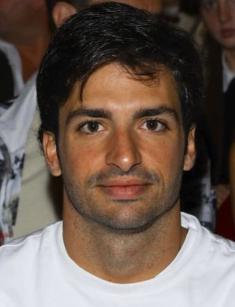 Carlos Sainz Vázquez de Castro, who is known simply as Carlos Sainz Jr., was born on the first of September 1, 1994. Carlos is a Spanish-native racing river. As for 2022, Carlos is competing for Scuderia Ferrari in Formula One. Carlos is known for racing in various championships, such as British and European Formula 3 for Carlin.

Carlos has been good at sports since early childhood. His dad is a double World Rally Champion, and his name is Carlos Sainz. The young racer was born in Madrid, Spain. Except for his dad, Carlos was raised by his mom, Reyes Vazquez de Castro. Carlos is not the only child in the family; he also has siblings (brother Antonio and sister Blanca). Carlos lived in Spain for all his childhood. He had been fascinated by motorsports since he was a child. By the way, he got his first car when Carlos was two (it was a gift from his godfather). In high school, Carlos loved to study literature. He completed his education with good marks and then started his professional racing career.

Carlos' career started when he was 20 with his F1 debut. Carlos has been a Formula One competitor since 2015, running under the personal digit 55. Max Verstappen was his first teammate, and Toro Rosso was his first squad. Carlos finished behind his teammate overall at the end of the season, although he did gain points in his first Formula One event, the 2015 Australian Grand Prix. He kept competing with Toro Rosso in 2016. Daniil Kvyat joined Toro Rosso from Red Bull as Carlos Sainz's teammate beginning with the Spanish Grand Prix. In the middle of September 2017, Renault confirmed that Jolyon Palmer would be replaced by Carlos. Sainz displayed his finest Grand Prix performance in the following race, the Singapore Grand Prix, finishing fourth.

Carlos has been a Formula 1 competitor for Renault since the 2017 United States Grand Prix. He finished seventh in his first Grand Prix with Renault, but he did not accrue additional points in the season's following events. After the 2018 race season, Carlos departed Renault and joined McLaren. He had a rocky start to the season, only managing to finish once in the third stage and even then outside the points zone. However, this was then followed by a highly consistent string of point finishes, broken only by Canada's 11th position.

As of 2022, Carlos Sainz is in a relationship with Isabel Hernáez. By the way, she works as a PR officer. Carlos and Isabel have been together since 2017, and they prefer not to talk about their relationship in public. Carlos has over 6 million followers on Instagram. On this social platform, he frequently shares photos and videos from his championships, as well as photos from events and other things.