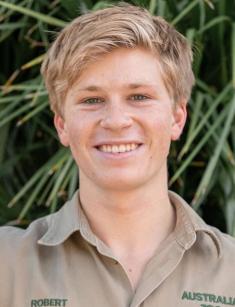 Robert Clarence Irwin, who was born on December 1, 2003, is an Australian-born TV personality and wildlife photographer. Being Steve Irwin's son, Robert hosts his own show called Robert's Real Life Adventures. He is also well-known for his work as a zookeeper at Australia's Zoo.

Robert was born into a well-established family from Buderim, Queensland, Australia. He was raised by Steve and Terri Irwin. Robert was raised along with his older sister, whose name is Bindi. When Robert was two, his popular dad tragically passed away while filming a documentary. Robert studied at home. In 2009, he first appeared as a cameo in the Free Willy: Escape from Pirate's Cove documentary. In 2014, Robert first hosted a show on the Discovery Kids channel.

Robert was nominated for a 2013 Logie Award for Most Popular New Male Talent after starring in Steve Irwin's Wildlife Warriors in 2012 alongside his mother and sister. He co-hosted the Wild But True television program on the Discovery Kids Channel in 2014 and 2015. With Lachlan Creag and Jack Wells, Robert co-authored the Dinosaur Hunter book series, which was published in 2013.

Robert is a regular contributor to the Australia Zoo Crikey publication. Robert made his late-night television debut on NBC's The Tonight Show Starring Jimmy Fallon on February 16, 2017. Robert can be seen on Australia Zoo TV on his own channel.

Except for Australian citizenship, Robert also has American citizenship. Robert has English ancestry and an abundance of Irish heritage. On November 20, 2022, Robert confirmed that he is currently in a relationship with Scarlett Buckley. By the way, Robert is an active user of Instagram. On this platform, he has more than 3.6 million subscribers. Robert often shares various photos and videos of animals.

The following are the films and documentaries in which Robert appeared: