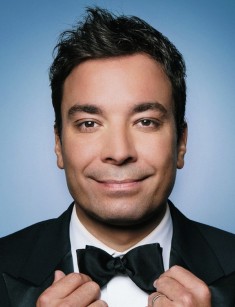 It is no exaggeration to call Jimmy Fallon one of the most popular TV hosts not only in America but the whole world. His sense of humor, artistry, sharp wit and the ability to be flexible in any situation make The Tonight Show Starring Jimmy Fallon utterly unforgettable. This show is often compared with the Russian talk show Evening Urgant with Ivan Urgant.

It is worth mentioning that Jimmy Fallon did not become famous overnight. The comedian and actor had to face severe criticism and a lack of understanding of the audience. However, charisma and dedication did not allow Jimmy to give up.

Jimmy Fallon was born in New York City. The future star spent his childhood in Bay Ridge, one of the neighborhoods of the city. From an early age, the boy was involved in music as Jimmy's father always gave impromptu concerts on the street to delight neighbors and passers-by. At the same time, the boy's family was religious and pious, Jimmy and his sister had to follow a lot of religious taboos and rules.

Jimmy attended the school where they paid much attention to religious education. The sensitive boy was so devotee that he even dreamed of becoming a priest for a while. However, when he grew up, Fallon was carried away by an acting course and gave up dreams about the church. The stage attracted Jimmy.

In high school, Jimmy did not miss a single school play, playing different roles and characters. Besides, the young man showed the talent of a comedian. Fallon always came up with funny jokes, prepared comic sketches and even parodied famous actors and singers.

Friends and teachers made fun of Jimmy, considering him a clown, but it did not offend the young man. Fallon was sure that he would become a famous comedian in the future, and he was right.

After graduation, Fallon entered college, choosing computer science. Soon the boy became bored with accurate calculations, and he transferred to the faculty of communications. However, Fallon did not study long. Soon he left college and started his way in show business. Only ten years later (in 2009), Jimmy Fallon returned to the college and received a coveted diploma, a Bachelor of Arts in communications.

Jimmy's path to fame and television began in 1997. The young man decided to act professionally and secured an agent. He did not wait long for the first invitations. So, Jimmy often did stand-up. Short performances with humorous sketches and funny monologues did not bring much money, but Jimmy gradually mastered skills, learned to behave on the stage and, of course, attracted the first fans.

Jimmy likes to recall in an interview that even then he was crazy about the late-night show Saturday Night Live, but he did not even dare to dream about getting into this program. However, life showed Fallon that nothing was impossible. In 1998, Jimmy’s agent helped the artist audition for the program, and soon Fallon appeared in his favorite TV show.

However, in the beginning, he was a featured player. After a while, spectators and producers liked Jimmy. So two years later, in 2000, Fallon already become a cast member of this show.

It seemed that Jimmy would never give up his conquered fame and place in his favorite program, but in 2004 the comedian again managed to surprise the audience. Fallon announced leaving the show. Jimmy decided to pursue a movie career and become an actor. Thus, he started a new page in his biography.

Many people were sure that Fallon would not be able to leave the live broadcast permanently, and they were right. After a while, Jimmy returned to television and, he amazed spectators again. This time Jimmy Fallon appeared as an independent TV host of the TV show Late Night with Jimmy Fallon which became one of the most favorite programs of Americans.

By tradition, the TV show was renamed in honor of the host, so it was called the Tonight Show Starring Jimmy Fallon (or Late Night).

This program has combined short jokes and the host’s monologues, as well as conversations with guests. Jimmy Fallon kindly makes fun of his guests, causing embarrassing and comical situations. Steve Higgins has become a co-host and Jimmy’s assistant.

Jimmy Fallon’s acting career was not so successful as his work in television shows. The first role did not even get in the credits. It was the film Almost Famous with Kate Hudson and Patrick Fugit. Then he played a series of small roles in the movies Anything Else by Woody Allen, Taxi directed by Tim Story, Factory Girl (Guy Pearce played artist Andy Warhol), as well as in the episode of the series Band of Brothers.

In 2016 Jimmy Fallon's filmography added the movie Popstar: Never Stop Never Stopping, where the comedian and TV host played himself. There are also actors Andy Samberg, Jorma Taccone, Imogen Poots in the film.

Tall and handsome Jimmy Fallon (Jimmy's height is 183 cm) has never complained about the lack of women’s attention. However, female fans were unlucky to find out that Jimmy turned out to be a one-woman man. In 2007, Nancy Juvonen agreed to become Fallon's wife. Jimmy and Nancy are the perfect couples as the woman also works in show business, she is a producer.

In 2013, the couple had their first daughter, Winnie Rose Fallon, and a year later, they had the second girl, who was named Francis Cole Fallon. Fallon and Nancy’s children were born via surrogate.

Nowadays, Jimmy Fallon continues to host the Tonight Show Starring Jimmy Fallon, which from year to year is only gaining popularity. Famous people are honored to be Fallon’s guests.

Jimmy Fallon is also interested in the Russian-speaking audience. The comedian often jokes about Russia, about President Vladimir Putin, and he even parodied Valery Leontiev.

According to rumors, in 2018 Jimmy prepares a surprise for the audience, but he has not disclosed details yet. Fans can find out about the life of their favorite TV host on Jimmy’s Instagram account, where he shares his plans and new photos. 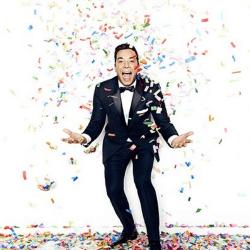