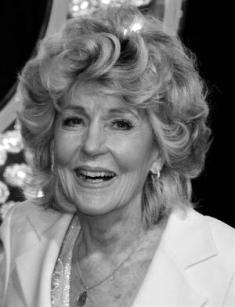 Georgia Holt who was born on June 9, 1926 was an American singer, songwriter, actress, and model. Born Jackie Jean Crouch, she is also famous as the mother of the pop icon and award-winning actress, Cher.

The star hails from Kensett, Arkansas. Her mother was just thirteen years old when she had Georgia. Her father was twenty-one at the time. Holt's parents parted ways when she was a child. She alternated between living with her mother and her father.

Georgia started her career as a singer at the tender age of six. She sang at an Oklahoma City radio station. She also collaborated with Bob Wills and the Texas Playboys and sang in Oklahoma saloons. In 1980, the singer recorded a country music album with Elvis Presley's band. It also included a duet with her famous daughter, Cher. The long play consisted of 10 songs and wasn't released until 2013.

Holt began acting in her twenties after she moved to Los Angeles. She appeared in such movies as 1950 comedy Watch the Birdie and 1951 romantic comedy Grounds for Marriage. Georgia was also known for her performance in two episodes of the hit CBS sitcom I Love Lucy.

The star appeared on many talk shows, including The Ellen DeGeneres Show and The Tonight Show With Jay Leno. Holt also was the subject of the 2013 television documentary Dear Mom, Love Cher. The movie told a story of Georgia's relationship with her famous daughter.

Georgia's first husband was a truck driver named John Sarkisian. The couple had a daughter, Cherilyn (better known as Cher). Georgia left John a day after their wedding in Reno, Nevada. She struggled financially while raising her child alone, and even temporarily placed Cher in an orphanage. Holt and Sarkisian remarried in 1965. Their marriage ended once again twelve months later.

The star's marriage to John Southall resulted in the birth of her second child, Georganne. Their marital union was short-lived. Holt's next spouse, banker Gilbert Hartmann LaPiere, adopted both of her daughters.

The singer has two grandchildren, including actor Chaz Bono, with whom Georgia appeared in an episode of the reality competition RuPaul's Drag Race.

On December 10, 2022, Cher shared on social media that her mother passed away. While Georgia's cause of death hasn't been officially released, her famous daughter mentioned that she struggled with pneumonia over her final months. Holt was ninety-six years old.