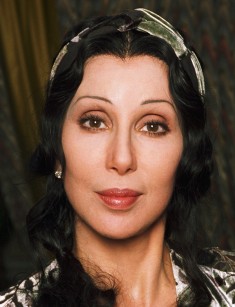 Cher is a famous American singer and movie actress of the Armenian origin, the winter of the Grammy Awards, Billboard Music Awards, four prestigious Golden Globe Awards, and the Academy Award. She is the only musician who has topped Billboard Hot 100 for 50 years in a row.

Besides, Cher is known as a songwriter and music producer. She tried herself as a movie director as well.

Cherilyn Sarkisian LaPierre Bono Allman known as Cher was born in 1946 in California. Her family was poor. The Armenian native, the father John Paul Sarkisian worked as a truck driver. The mother was a little-known actress of the Indian origin Georgia Holt. When the girl was born, her parents had already divorced; Cher had the chance to meet her father when she turned 11.

Cherilyn was not an industrious student, and sciences did not attract her. In addition, the girl was too shy. The example of her actress mother instilled the dream to Cherilyn: she wanted to grow up and become a star; she dreamed of the singing and acting careers at the same time.

Teenage Cher lived in El Centro, one of the largest Californian cities, and spent all the time in movie theaters and rock concerts. She “got into the character” of a star, practiced giving autographs, and chose best signature versions.

At 16, the young woman left school and went to Los Angeles with her friend to study acting.

Cher’s career began with a miracle. In 1962, the young woman met the assistant of a famous producer Phil Spector, Sonny (Salvatore) Bono. Sonny offered Cherilyn to live in his house and keep it. Initially, the woman cooked for him and did the cleaning. In the course of time, Sonny Bono noticed the young woman was genuinely interested in music, especially rock. More than that, Bono discovered Cher had a beautiful and deep voice. The couple’s relationship changed: they became business-related and later transformed into a love affair.

Initially, Cher was hired as a backup singer in Phil Spector’s studio and recorded classic songs some of which became hits. In 1964, Cher’s first solo recording, the song “Ringo, I Love You,” appeared, although the singer had to use a pseudonym because the producer believed the woman’s name was “not American.”

The debut was good. Sonny and Cher tried “to fly with their own wings.” The man created and produced songs so that their duo would perform them later.

Soon, the bright young couple, the long-haired hippie and the exotic beauty with a sensual, deep voice, became the sensation across the Atlantic.

At the beginning of 1965, the duo had the first album Look at Us released. Sonny insisted “I Got You Babe” be the single. In summer 1965, Sonny and Cher presented their second album All I Really Want to Do. The song with the same name title was included there; it was her first hit.

Seven new albums followed. The last works were not much popular. As it turned out, the couple had substantial debts because of the album failures and bank loans. They decided to reorient themselves and present their show on a TV channel.

The project was named The Sonny & Cher Comedy Hour, but it was changed to the better-sounding The Sonny & Cher Show. The program was broadcast for seven years. It was a mix of humorous sketches and musical performances; the greatest stars were the duo’s guests.

In 1974, Sonny and Cher divorced, and the popular show finished. The former spouses tried to have their own programs, but nothing worked out. Encouraged by the audience, Sonny and Cher reunited on the screen, but their collaboration did not touch their private lives.

In 1982, Cher moved to New York where she was offered to play in a Broadway performance. The acting debut proved to be successful, and Cher began her movie career. Mike Nicholls appreciated the woman’s talent and offered her a role in his Silkwood. As soon as the beginning actress found out Meryl Streep was going to star in the movie, she agreed immediately. Cher got the role of a gay woman who fell in love with the main character; her acting was so convincing and bright she was nominated for the Academy Award.

Three years later, Cher appeared on the big screen again in the drama Mask. The movie tells the story of a teenager with a rare disease that disfigured his face. Cher took the role of the boy’s mother. Later on, the actress worked on the movies Suspect, The Witches of Eastwick, and Moonstruck. For the latter project, the actress gained the Academy Award. She played Loretta Castorini, the rational and cold woman who suddenly falls in love.

This comedy melodrama won three Academy Awards one of which was given to the best actress, Cher.

At the same time, the woman’s singing career continued to develop. In 1987, she signed the agreement with Geffen Records and had a new album released; Diane Warren, Michael Bolton, and Bon Jovi collaborated with the singer.

In 1989, the music video for the hit “If I Could Turn Back Time” came out; however, it was banned because of the singer’s too provocative dress. Despite this situation, the artist did not stop wearing such clothes: they were a must in her videos and live shows.

The next year, Cher’s hit “The Shoop Shoop Song” was presented and topped many music charts.

In 1994, The Beavis and Butt-Head Experience came out. The next year, the new album It’s a Man’s World sent the former in the shadow: the success was tremendous. The hits “Walking in Memphis” and “One by One” were included in the album.

1998 brought new achievements. The album Believe with the Grammy-winning hit under the same title was released. The songs “Strong Enough” and “Living Proof” made the artist a gay icon.

The singer did not stop performing in the new millennium. In 2001, Cher and the Italian musician Eros Ramazzotti recorded the song “Più che puoi” in English and Italian simultaneously. Later, fans called this hit one of the most recognized and popular Ramazzotti’s tracks.

The book where Cher described the hardships and traps of a star existence became a significant milestone in the singer’s career. In 2002-2005, she visited the majority of the countries with goodbye concerts.

From the end of 2008, the singer performed only in Las Vegas; that famous place became even more popular. People often went to the city not as much for casinos as for Cher’s live concerts.

Today, Cher remains the only singer whose works were included in the top ten songs of Billboard Hot 100 in the last 50 years.

Cher has two children. In 1969, the daughter Chastity was born in the marriage with Sonny Bono. The girl received her name in memory of the movie Chastity: Cher got pregnant when she was working on that project. In 1976, in the second marriage with Gregg Allman, the second child, the son Elijah, was born.

After the divorce with Allman, the celebrity had several short-term romances. In the 1980s, she was dating Val Kilmer, Eric Clapton, Richie Sambora, and Mark Hudson.

At the White House reception, 40-year-old Cher who was a great star at that moment met 23-year-old Tom Cruise who had just begun to conquer the world of cinematography. Their affair lasted for several months; then, Cruise married. However, it was not Cher: it was the actress Mimi Rogers.

At the beginning of 1998, Cher received a blow: her first husband Sonny Bono who remained her friend died at a ski resort. The singer confessed she continued to communicate with Sonny after his death with the spiritual medium James Van Praagh’s assistance.

In 2009, Cher’s daughter Chastity Sun Bono underwent sex reassignment surgery. Many magazines published the photos of Chastity before and after that. The man was getting his new document for a year and in 2010 became Chaz Salvatore. It was difficult for Cher to accept her child’s decision.

In 2012, the star married again: the biker Tim Medvetz became her husband.

In May 2017, the singer performed at the Billboard Music Awards. The event was widely discussed in the media: the singer appeared for the first time in the last 15 years at the ceremony. The woman’s extravagant dress became the theme of the day.

The 71-year-old singer shocked the audience with her provocative clothes and made the American and international media talk about her shows. At first, Cher appeared on the stage wearing something like a semi-swimsuit or a semi-G-string made of white threads of sparkling beads. That dress hardly covered the woman’s naked body. Then, the artist wore translucent black tights with a leather jacket and black boots. Fans admitted these eccentric images were very Cher-like and looker natural on her.

At the beginning of 2017, the singer had to face a tragedy: her old friend and ex-husband, the rock musician Gregg Allman, died of liver cancer. Cher could not but shed a tear at the funeral ceremony.

The musical The Cher Show about the singer’s life and work was premiered in 2018. It will also debut in Broadway. 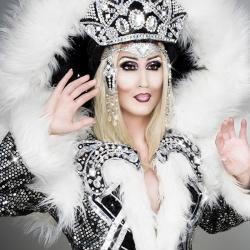