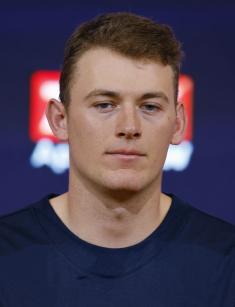 Michael McCorkle Jones who was born on September 5, 1998 is an American professional football player. Famous as Mac Jones, he played college football for the Crimson Tide. He started his professional career as a quarterback for the New England Patriots and is the highest-drafted offensive player in Bill Belichick's history with New England.

The future NFL player was born and raised in Jacksonville, Florida, where he attended one of the top private schools. He comes from a family of star athletes. Mac's father, Gordon, was an NCAA tennis player. His mother, Holly, was on her university tennis team as well. The player's sister, Sarah, shared her parents' passion for the sport and played it for four years. Mac also has a brother named Will. As a child, Jones worked as a model and actor. He began playing football when he was just five years old.

In 2017, Jones intended to enroll in the University of Kentucky, but eventually changed his mind and committed to Alabama. Mac played for the Crimson Tide until 2021, when he decided to opt out his final year of eligibility and declare for the 2021 NFL draft. Rated as a top prospect, the player was picked by the Patriots. He agreed to a standard rookie contract worth 15 million dollars. His total stats for first year with the team were 3,801 passing yards and twenty-two touchdowns. It was the best performance among rookie QB's that season.

Mac began the 2022 season under coach Matt Patricia. In September, Jones made news headlines after sustaining an injury and was temporarily replaced by Bailey Zappe. Fans were wondering if Mac would face Aaron Rodgers, but he remained out of the field for the game against the Packers.

Since September 2019, the football star has been in a relationship with Sophie Scott. The couple met at college. Mac's girlfriends studied exercise science. Sophie was also a sports medicine trainee with the football team.

Jones earned a degree in communication studies. Known for his sense of humor, he went by "Joker" in college.

Jones was named to the Pro Bowl and PFWA All-Rookie Team in 2021. He is also a Heisman Trophy finalist and earned 4 SEC Offensive Player of the Week titles in college.