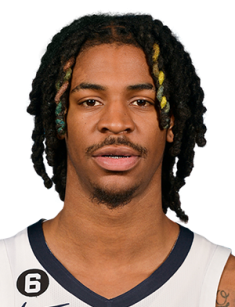 Temetrius Jamel "Ja" Morant is a South Carolina-born Native American professional basketball player. Born August 10, 1999, Temetrius is best known for being a point guard for the NBA's Memphis Grizzlies basketball team. The player is also known as simply «G12». Speaking about his parameters, Temetrius is 188 cm tall and weighs about 79 kg. He is American by birth and of African roots.

Temetrius is from South Carolina. He was born in Dalzell to his parents, Jamie and Tee. Since Temetrius' parents were sportsmen themselves (Jamie played softball as a point guard in college while Tee was a basketballer and even played with Ray Allen), he has been interested in basketball since an early age. His dad taught him the basics of basketball right in the backyard. Temetrius used to play basketball with guys much older than him when he was younger. Then he started playing in the Amateur Athletic Union as a member of the South Carolina Hornets team. Interestingly, Zion Williamson was one of his teammates at the time. Speaking about his educational background, Temetrius studied at a public high school in Sumter, SC. Then he started playing college basketball at Murray State.

His career first started in high school and then continued in college. Temetrius' professional journey started back in 2019 when he was drafted in the first round of the NBA. He was selected by the Memphis Grizzlies.

Temetrius is very close with his family, especially with his younger sister, with whom he played basketball in the backyard. On his arm, he even has a tattoo that says "beneath no one." In 2019, Temetrius welcomed a daughter. As of 2022, he is no longer in a relationship with Kadre Dixon; he is single. One of Temetrius' hobbies is listening to music, especially rap. He is a huge fan of Lil Baby, a famous American rapper.

Throughout his career as a professional basketballer, Temetrius received the following awards: