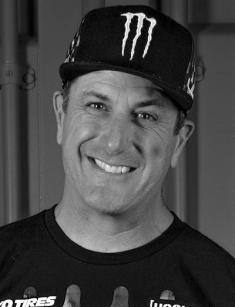 The future celebrity was born on November 21, 1967, in Long Beach, California. There has been no official information available about his parents and early life.

In addition to rallies, he was good at motocross, skateboarding and snowboarding.

In 1994, Ken co-founded the DC Shoes company with two colleagues. They manufactured footwear for action sports as well as apparel and accessories. In ten years, they sold it to Quicksilver. Ken switched to the Company Hoonigan Industries business which specialized in apparel for auto enthusiasts. One of the most sought-after items that he has ever promoted was the brain bucket.

In 2005, Ken began to perform for the Vermont SportsCar team. He drove a Subaru. He was acknowledged as the Rookie of the Year.

The next year, he inked a new sponsorship contract with Subaru. He debuted in the inaugural X Games rally and got the bronze award. In 2007, he won the silver medal in the same competition.

In 2008, Ken won a rally in Canada but wasn't credited championship points for it for the lack of a local competition license. He became the runner-up in the Rally America National Championship.

The next year, he took part in the Top Gear show.

He began to film Gymkhana-style driving videos. They're available on Amazon Prime.

In 2010, Ken switched from Subaru to Ford, joined the Monster World Rally Team and took part in several high-level competitions.

In 2004, the star tied the knot with his long-term girlfriend Lucy, a rally driver and entrepreneur. Her business, Luna's Kitchen, was launched in 2017. Ken's wife preferred to stay away from the limelight.

The couple had three children. The elder daughter, Lia, began to compete for her dad's Hoonigan Racing team at the tender age of 11. At the moment when Ken passed away, Lia was aged 16. The names and age of her younger sister and brother remain unknown.

On January 2, 2023, a snowmobile accident took place near Ken's ranch in Utah. A few days earlier, Jeremy Renner was badly injured by a snow plow. A few hours later, Damar Hamlin collapsed on the field.

Ken went on a ride together with a group but at a certain moment, he found himself alone on a steep slope. The vehicle flipped over and landed on top of him. It was totally unexpected because there was no avalanche or another emergency nearby. Ken died instantly. The injuries were too severe and he had zero chance to recover.