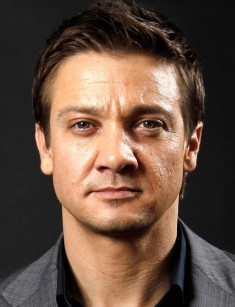 But Jeremy Renner’s starring role was Clint Barton/Hawkeye, Bowman and super spy, a member of the Avengers, one of the title characters of the popular franchise of fantasy action movies based on Marvel comics. Jeremy Renner portrayed this character in blockbusters Thor, The Avengers, Avengers: Age of Ultron and Captain America: Civil War, and will also perform the same role in the upcoming comic blockbuster and crossover Avengers: Infinity War of another popular franchise Guardians of the Galaxy.

Jeremy Lee Renner was born in Modesto, California, in January 1971 in a large family. Jeremy is the oldest of six children. His mother Valerie Cearley is Irish and father Lee Renner is German. They married at a very young age. But when the oldest son was ten years old, they decided to separate.

After graduation from Fred C. Beyer High School, Jeremy Renner continued his studies at Modesto College. The reason for entering was the possibility to attend an acting class. Jeremy has been fond of the world of theater and cinema for a long time. At college, he improved acting skills and first came on stage. His friend and future actor David Boreanaz studied together with Renner in Modesto.

In the early 2000s, Renner was offered to play in the American action crime film S.W.A.T. Jeremy appeared in the role of Brian Gamble, a partner of a special forces officer. Renner's hero challenged the order and wounded the hostage, and he was punished. But Gamble considered the punishment unfair and resigned from the police. Soon he joined the criminals.

Renner attracted even more attention of viewers after playing in the film Dahmer. It is a biographical true-crime horror about a serial killer, Jeffrey Dahmer. Dahmer is not just a murderer; he is a sadist who conducts experiments on his victims. His childhood and memories of his parents' divorce caused Dahmer's mental illness. Jeremy played a serial killer in this film. The movie brought him fame.

Jeremy got a starring role in the project The Hurt Locker. Kathryn Bigelow’s war thriller film received six Oscar nominations. One of them belonged to 37-year-old Renner, who played Sergeant William James. The film tells about the everyday life of American bomb-disposal experts in Iraq. Film critics agree that Jeremy Renner brilliantly managed to show the character of his hero. Therefore, the role earned him the primary Academy Award nomination for Best Actor

The first starring role was followed by the second one. Renner received an offer from Ben Affleck to play in his film The Town. It is a crime drama, based on Chuck Hogan's novel Prince of Thieves. The plot of the film tells how four friends rob banks and armored cash transport cars. The movie was released in 2010 and premiered at the Venice Film Festival.

Soon the drama film was released in America, and during the opening weekends, it grossed $ 23 million. The film grossed $ 154 million worldwide, which is almost five times more than its budget. The movie was highly rated and won several awards. Jeremy Renner was nominated for the Oscar – Best Supporting Actor. It is noteworthy that Jeremy managed to outperform the actors who played the title characters.

After The Town, Renner's career was growing fast. He was invited to play in the high-budget blockbusters Mission: Impossible – Ghost Protocol and The Avengers, which gained immense popularity with the viewers and critics’ acclaim. Short Renner (the actor’s height is 175 cm) ideally suited for the role of a talented archer and superspy.

The actor played one more starring role in the project The Bourne Legacy, where he portrayed the protagonist and super-agent, Cross. The film was released in 2012. At the beginning of the following year, Renner's fans saw their idol in the project Hansel & Gretel: Witch Hunters, where he played Hansel. The plot of the film is a grim continuation of the fairy tale about a witch in a gingerbread house. A brother and sister could not only escape from the sorceress but also kill the witch. Later, adult Hansel and Gretel devote their lives to the war against evil spirits and dark witchcraft.

In 2013, the actor also played a leading role in the drama The Immigrant. The film about a deadly love triangle shows a magician and his brother who fall in love with an illegal migrant from Poland. The movie screened at the Cannes Film Festival.

In 2014, Jeremy Renner played a title role in the crime thriller film Kill the Messenger, based on the book of the same name, which focuses on the case of journalist Gary Webb, a Pulitzer Prize winner. In the 1990s, Webb learned about secret papers that confirmed the criminal actions of the US government against its own citizens. Despite the pressure, Gary Webb published some exposés. Jeremy Renner got the role of the brave journalist.

In 2015, the actor returned to already famous roles in the sequels of Hollywood blockbusters. That year, Renner appeared in the films Mission: Impossible – Rogue Nation and Avengers: Age of Ultron.

In 2016, the actor returned to the role of Hawkeye in the superhero film Captain America: Civil War. The action film continued the story about the Avengers, although the movie belonged to the series of films about Captain America (the stories about the famous character of Marvel comics books Captain America / Steve Rogers (Chris Evans). Therefore, the title characters also included the members of the superhero group. Robert Downey, Jr., Scarlett Johansson, and Jeremy Renner were on the set.

The plot of the film was based on the comics "Civil War." Two leaders of the Avengers, Iron Man and Captain America, took opposite positions regarding the law establishing a UN panel to oversee and control the superheroes. It leads to a split in the group and forces the Avengers to choose someone's side.

The plot showed a confrontation where any side could not be called good or evil. It impressed viewers very much. The advertising campaign also encouraged fans to choose which side they support, which led to controversies and discussions on the Internet. Film critics also warmly received the film, saying that the confrontation between the ideas of freedom and security is much deeper and more complex than the problem of good and evil that has been at the heart of the box-office blockbusters of the past decade.

Jeremy Renner was nominated for the Oscar twice, as well as for BAFTA and Golden Globe Awards for his work in the movie.

Jeremy Renner does not like to talk about his personal life. He studiously avoids this topic communicating with journalists and fans. At the same time, the actor does not hide from the fans. Jeremy Renner regularly posts pictures on his verified Instagram account with 4,7 million subscribers.

Renner dated a Canadian model, Sonni Pacheco, who in March 2013 gave birth to his daughter Ava Berlin Renner. In September of the following year, the actor said that he and Sonni had a secret wedding. But in December 2014 Pacheco announced that she had filed for divorce. Curious journalists did not find out the reason. The couple just cited irreconcilable differences. The former spouses did not explain the details.

In spring of 2019 there appeared information, that Jeremy is dating the 32-year old singer Lady Gaga. They even have common passion for music, as the actor was engaged in the music in his childhood and youth and was really fond of it. At present Jeremy and his ex-wife Sonni are trying to find compromise on the question of the custody of their daughter.

In 2017, Jeremy Renner together with his colleague in the franchise The Avengers, Elizabeth Olsen, played the title roles in the murder mystery film Wind River. The film shows the territory of the Indian reservation and centers on murders, revenge and mystical sinister natural forces.

The plot of the film is based on the short story "Story of Your Life" by American writer Ted Chiang. Mysterious aliens come to Earth. They are friendly with the earthlings and are trying to establish contact with the people who come on board the alien ships which resemble shells. The group of scientists, which includes Renner's character, deciphers the aliens’ language, while the military around the world insist on an interplanetary conflict and try to destroy the ships.

Besides, the actor will appear in television series. In 2017, the Czech-American drama series Knightfall will air, and Jeremy Renner will be a guest actor and executive producer. The plot of the television series centers on real events on October 13, 1307, when Pope Clement V and King Philip IV of France provoked persecutions and executions at the stake of the Knights Templar. The main hero of the series, the leader of the Templars, Sir Landry, will have to cope with the failures in the Holy Land, persecution and discontent, and at the same time pursue the Templars' primary goal - the search for the Holy Grail.

In 2018, one more fantasy action movie of the Marvel Studios Avengers: Infinity War is scheduled to premiere. This film will unite the Avengers franchise, which is the crossover of the series of films about Iron Man, Captain America and some comics series with Guardians of the Galaxy and will continue the story of the second film about space superheroes.

Avengers: Infinity War will show the events which occur four years after the end of the second part of Guardians of the Galaxy. The Avengers, who split into two groups, will unite again, and join the Guardians to confront the galactic villain Thanos, who acquires the stones of infinity to gain the power to change the reality.

In 2018, the animated film Arctic Justice: Thunder Squad will also be released, and Renner will voice the character, Swifty.

But the real test for the actor was shooting in the new comedy Tag, which is also scheduled to premiere in 2018. Renner broke both hands while doing the trick. At the Karlovy Vary International Film Festival, the actor appeared in bandages. Renner reacted to injuries quietly and told reporters that he considered such a risk to be part of the actor's work.

After recovery, the actor will shoot in the fourth Avengers film and the next project about Jason Bourne, but it is still untitled. 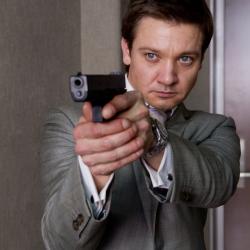