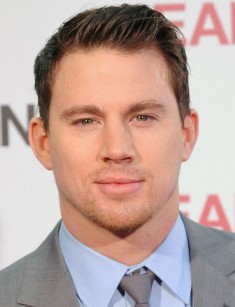 Channing Tatum is an American actor and producer. He became famous at the beginning of the XXI century, starring in Hollywood films.

An actor, producer, and model Channing Tatum was born on April 26, 1980, in Cullman, Alabama. Parents of the future celebrity are simple American citizens. The mother of Channing worked in the airline company, and his father worked in a construction office. Kay and Glenn (the actor's parents) wanted children very much, so they were very happy when Channing was born. Then seven more children were born in the family.

When Tatum graduated from high school, he immediately went to Florida, where he entered the military school. In this educational institution, the young man showed himself as a good student. Later, the young man moved to West Virginia, where he planned to continue his studies at a local college.

As soon as Channing's dream came true and he entered the college, the student unexpectedly left his studies and went back to the parental home. No one knows why he decided to do this. Channing himself keeps it a secret until now.

Returning to his homeland, Tatum imagined without troubles. Nevertheless, everything happened the other way around. To survive, the former student had to sell clothes, dance exotic dances and perform in strip clubs. Thus Channing managed to solve financial difficulties.

One day the man decided to change his life and went to Miami. There, Channing was noticed by a PR agent of the local modeling agency.

For the first time, Tatum tried himself as a model in Orlando. The jury, who were at the contest, noticed Channing, inviting the future actor to star in the video of the famous Latin American singer Ricky Martin. For this work, Tatum received a fee of $ 400.

Then, Channing collaborated with Giorgio Armani and Abercrombie & Fitch companies. 2000 became special for Tatum. The American participated in a fashion show, organized by the men's magazine “Men's Health” in a nightclub in Miami.

Channing continued to work hard. Already in 2002, the American tried himself as an actor. The young man starred in the Pepsi advertising campaign. After that, the man was offered a job in the modeling agency Page 305. Tatum became the face of the most famous brands and appeared in commercials. Then Channing decided to radically change the image and appeared in front of the cameras almost bald.

Channing's modeling career was successful. Now Tatum works with major modeling agencies in New York and Milan. From that moment, Channing's face can be found on the covers of fashionable glossy magazines. In 2001, Channing was listed among the 50 most beautiful people on the planet.

According to Tatum, the modeling career contributed to his further development. His work in the fashion industry helped him to understand what he wanted, to set the life goals. The future actor considered himself as a lucky man.

For the first time, Tatum appeared on television in 2004, when the film "CSI" was at the height of popularity. Already in 2005, the actor begins to appear in films, where he plays insignificant roles. For example, he played the role of a boy from the church in the film "War of the Worlds", a biker in the film "Supercross", as well as a young man in the film "Havoc".

These events made Tatum forget about the modeling career. He decided to work in the film industry. There were rumors that in the film "Mongol" the directors planned to invite Channing Tatum for the role of Genghis Khan. It was reported that the American participated in the casting, but eventually, the filmmakers decided to take the Japanese film actor Tadanobu Asano.

At this time, the producer Lauren Shuler Donner noted Tatum. The American film producer invited the actor to star in the film "She is a man" in the title role. The premiere of the film was held in 2006.

In future, there was a breakthrough in Tatum’s career; he got a role in the musical melodrama "Step Up". The American did not think that dancing would be the meaning of his life. The premiere of the film was held on August 11, 2006. The films "A Guide to Recognizing Your Saints" and "Stop-Loss" were released. Tatum played the main roles.

In 2010, the new film "Dear John" appeared on TV, where Channing played the role of a soldier. A year later, the films "Haywire" and "The Son of No One" were released. Soon Tatum founded his production center.

In 2011, the media reported that Tatum will star in the film "Blood Brothers." The film was planned to be shot in Russia. The Chernin Entertainment studio should have produced this film. It was assumed that the American actor will play in "Blood Brothers" after finishing the shooting in the series "21 Jump Street", but the new film was never created.

In 2012, the movie "Magic Mike" appeared on the screens. Channing Tatum played the main role in the film. The film by Steven Soderbergh received mixed reviews. The filmmakers told about the forbidden, scandalous world of male striptease. The film is interesting because the story of the main character is partly based on real events from the life of Channing.

The film "The Eagle" is one of the most notable works in the acting career of the American actor. This film by Kevin McDonald was created on the basis of the book by the English writer Rosemary Sutcliff. The world premiere of the film was held in 2011.

The film tells of the struggle of the Roman legions with the Picts in Britain. A young centurion, Mark Flavius Aquila, whose role was performed by Channing Tatum, became the main character. According to the plot, the Roman legionary goes to Caledonia, where the symbol of the Ninth Legion - the Sign of the Eagle (Aquila) was lost. The culprit for the loss was called Mark's father, who also commanded the army.

Film critics and the audience liked the actor's play. Later the directors offered Channing similar roles in military and historical films, but the American more agreed to participate in films of a different genre.

The release of this film caused a resonance in the scientific community. The historians began to discuss the book Rosemary Sutcliff because experts said that the film "Eagle" was the continuation of the unconfirmed theory of the disappearance of the IX Hispana legion (Spanish Legion), which existed during the Roman Empire.

Some of them believe that the legion was not defeated in the territory of modern Scotland at the beginning of the second century. There is reliable information about the activity of the military formations in the Rhine area in 120 AD. There are facts about the service of some officers, which represented the legendary legion, after that. Nevertheless, the "Ninth" didn’t appear during the Emperor Marcus Aurelius.

The personal life of the actor, producer, and model Channing Tatum remained a secret. Some newspapers and magazines wrote about the actor’s marital status. Nevertheless, everything changed when a fan of the Hollywood star started a blog, in which she posted information about the idol. Such an online diary has become popular. After that, the actor invited the girl to New York and made a statement - the blog becomes the main site of the star.

On the set of the film "Step Up", the actor met a charming girl who won his heart. The actress Jenna Dewan played in the same picture the girlfriend of the main character. Tatum for two years did not dare to make a proposal to his girlfriend.

Once in Hawaii, Channing in a romantic atmosphere proposed to Jenna. In 2009, the couple got married. The wedding ceremony was held in Malibu. The wedding was amazing.

Hollywood was delighted with the Tatum family. The couple together starred in the films in the main roles.

In 2012, journalists noticed Jenna’s small belly. This clearly indicated that Channing's wife was pregnant. In May 2013, the charming daughter Everly was born. Channing became the happiest person on Earth because the main desire of a man to become a father was realized.

According to representatives of the world's tabloids, the American actor is the most successful representative of the film industry of the 21st century. Numerous fans believe that torso and height (Channing's height is 1.85 cm) of Tatum is his main advantages.

In 2016, representatives of The Hollywood Reporter reported that Channing Tatum will play a mermaid in another film. It is known that in the original film of 1984, the main roles were performed by Daryl Hannah and Tom Hanks.

The film "Splash", a prototype of a new film, tells about the relationship between a mermaid and a young man. The film tells of a heroine who came to New York, where she became a mermaid during the experiments of scientists. At the same time, the main character saved the mermaid, and she opened the young man a world of other opportunities. He got the ability to breathe underwater.

In 2017, Channing Tatum won the 42nd People's Choice award, which is awarded mainly to pop culture figures based on the results of voting on the Internet. The title of the Best Actor was given to Channing.

It is known that the actor is a great lover of pets. In 2016, Channing Tatum announced the death of his goat Heather. The American actor published a photo of the animal on the Instagram.

The picture also shows a two-year-old Everly, the daughter of Channing. Fans of Hollywood celebrities called this picture stunning. 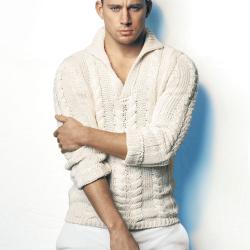