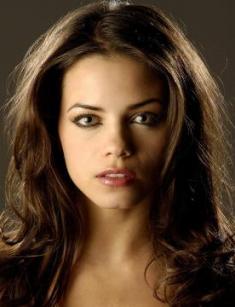 Jenna Dewan is a famous American actress and dancer. She rose to prominence after the release of dance dramas Step Up and Take the Lead. Jenna Dewan, whose full name today is Jenna Dewan-Tatum, was born on December 3, 1980, in Hartford, Connecticut, under the Sagittarius sign. The father of the beautiful green-eyed lady, Darryll Dewan, is of Lebanese and Polish descent. Jenna's grandmother was born in a family of Polish immigrants, and her grandfather had Lebanese ancestry. Darryll Dewan became famous as a running back on the Notre Dame Fighting Irish football team.

Although Jenna Dewan is of Polish and Lebanese descent due to the origin of her father, her mother also contributed to the actress’s mixed ancestry. Nancy Smith is of German and English descent. Dewan was the oldest child in such a multinational family. Jenna also has three younger brothers.

The unusual origin contributed to the attractive appearance of the future dancer. So, since an early age, Jenna has attracted the attention of men. Despite her short height (5.15 ft. (157 cm)) and the corresponding weight (about 110.23 lbs. (50 kg)), Jenna has followed in her father’s footsteps in some way. The girl went in for sports and made efforts to become a professional dancer. Dewan was fascinated with dancing at the age of five.

Jenna was a cheerleader during her school years. After graduating from high school, she entered the University of Southern California, where the young woman was voted prom queen.

While studying at the university, the future actress continued to improve her dancing and quickly became known in celebrity circles. When she came of age, the actress had already worked as a backup dancer for Ricky Martin, Celine Dion, Toni Braxton, Missy Elliott, Pink, and other famous singers.

These performances influenced the career path of Jenna Dewan. The famous agent, who toured with Ricky Martin and Janet Jackson, paid attention to the charismatic dancer. Jenna could show perfect dancing skills, the ability to be confident in front of the camera, incredible charm, and artistry.

Jenna’s first serious work was Janet Jackson’s concert tour, which the woman joined as a dancer. In 2001, she continued to cooperate with Jackson. Jenna starred in the music video for the singer’s song "All For You."

At the same time, Dewan continued to perform at the concerts of Ricky Martin, Justin Timberlake, NSYNC, and others. The dancer made her television debut in Pink’s show during a music ceremony. Subsequently, Dewan appeared in the videos of Justin Timberlake, Christina Aguilera, Missy Elliott, Mandy Moore, etc.

Jenna Dewan made her film debut playing the bit part of a member of a cheerleading squad in the popular film The Hot Chick. Dewan got a walk-on part since she danced in front of the camera. Therefore, her first appearance on the big screen is considered to be the sitcom Quintuplets, in which she played in 2004. But the role also turned out to be small, and the project did not become popular.

In 2005, after a series of similar bit parts, Jenna finally got the leading role of Tamara in the film Tamara. It is a low-budget horror movie about a girl who was not popular with classmates and was bullied continuously. The heroine was so tired of being an outcast that she was ready to return from the underworld to take revenge on cruel classmates. Tamara did not win the critics and viewers’ love; nevertheless, it became an essential step in Dewan’s acting career.

The same year, Jenna got the role of Sophia in the horror film Dark Shadows.

Perhaps, Jenna thought that films with her participation were doomed to failure, and, despite her young age, she should devote herself to a dancing career. But soon there was a turning point in her life. The woman’s filmography included the incredibly popular film Step Up. The movie was released in 2006 and told about the love story of a street dancer and ballerina.

The fascinating love story of such different heroes and beautiful dance performances caused a sensation in the film industry and became the first film in the Step Up series. The final dance was an example of quality choreography in the cinema for many years.

The actress played a prominent role in the drama Take the Lead, in which Antonio Banderas portrayed the title character. Jenna played dancer Sasha who could not choose between two guys.

The notable project of the actress and dancer is the film Setup, in which Jenna played with Bruce Willis, 50 Cent, and Ryan Phillippe. The film about the brazen robbery was released in 2011 and distinguished itself with an incredibly stellar cast, participation in which could not but flatter young Dewan.

In 2012, the actress appeared in the melodrama 10 Years, in which Channing Tatum (Jenna's husband) worked as the producer and played the leading role. The film tells about the classmates meeting. The title character comes together with a charming girlfriend and meets his first love.

In 2012-2013, Jenna appeared in several episodes of the popular TV series American Horror Story: Asylum. The women played the role of Teresa.

Since 2015, Dewan has played the role of Lucy Lane in the superhero TV series Supergirl about Superman's cousin, Kara Zor-El.

Jenna founded a production company called 33andOut Productions, along with friends Reid Carolin, Adam Martingano, Brett Rodriguez, and her husband, Channing Tatum. The first production is the documentary film Earth Made of Glass which premiered at the 2010 Tribeca Film Festival.

It is hard to believe that the photo of the shooting of the iconic movie Step Up depicts the title characters who does not feel any emotions. However, things were different. The film, which was a turning point in the career of Tatum and Dewan, also contributed to the development of their relationship.

The couple met at the auditions for the dance film. Before that, Tatum had worked as a stripper, so his skills played into the hands of the artist. As for Jenna, her dance experience was in no doubt.

When they first met, the performers had already broken up with their lovers. Dewan ended a relationship with Shane West, and Tatum was rumored to separate from Amanda Bynes. At first, Jenna didn’t take her colleague’s intentions seriously. The woman thought the young man was feather-pated. But the actor proved that it was not true.

Before the actors became incredibly famous and popular, they both had had a rather complicated financial situation (especially Channing). The actor later said that Jenna helped him in difficult times. Sometimes she even paid his rent.

But later the celebrity couple had no such problems.

Later, Jenna's husband said in an interview that he owed his overwhelming success only to his wife.

The wedding, after which Jenna got a double surname, took place in 2009 in Malibu after three years of dating. The newlyweds chose the song "Somewhere Over the Rainbow" by Israel Kamakawiwo'ole for their first dance.

The couple spent the honeymoon in Bali. But due to their tight working schedule, the vacation lasted only two days. On the island, the husband and wife got matching tattoos that spell out “side by side” in Balinese.

In 2012, it turned out that the actress was pregnant. In May 2013, Jenna gave birth to the charming daughter, Everly Elizabeth Mazell Tatum. Children are important for both spouses.

After childbirth, the actress’s body quickly got back to normal, which she proved posting photos on Instagram. A little later, Jenna's trainer Jennifer Johnson said that a healthy diet and training helped Dewan achieve beauty and harmony. However, the actress does not keep extreme diets.

According to cosmetic surgery experts, the actress looks young not only thanks to self-care and proper make-up but also to plastic surgery. Experts have noticed that Dewan’s cheeks have not sagged, as she advances in years, which means that she has passed the contour plastic procedures. Moreover, the woman allegedly got a nose job. If people compare the actress’s photos of different periods, they can notice the different shapes of her nose.

In 2015, there were rumors that Jenna was pregnant for the second time. But this information turned out to be incorrect.

A year later, the couple participated in the reality competition TV series Lip Sync Battle. Jenna and Channing proved themselves to be one of the hottest couples in Hollywood. The woman stripped for her husband, repeating Tatum's dance from the film Magic Mike XXL. The audience and her beloved man were delighted.

In the summer of 2017, on the wedding anniversary, the couple took their daughter and went to the forest camp. Later, the actor said that at first, it was difficult to be there, and he wanted to check the mail. But then the family began to enjoy each other's company. Everly liked this kind of holiday most of all. She learned fishing, roasted marshmallows, and went boating with her parents.

Jenna and Channing were considered to be a strong couple in Hollywood. But in November 2017, rumors had it that celebrities faced family problems. In early April 2018, the couple confirmed that they had broken up. They did not tell the reasons for the separation, but according to some sources, the celebrity's busy schedule contributed to the breakup. The actors do not have enough time for the family. At the same time, the artists declared that they loved each other, but they would go their own way. The couple has not finalized the divorce yet.

Dewan’s husband has an official website. Besides his name, Jenna Dewan-Tatum is mentioned in the website header.

Nowadays, Jenna continues to develop an acting and dancing career. In May 2017, the reality competition TV series World of Dance was launched on NBC. Jenna was a presenter and mentor in the project.

In March of the same year, Dewan and Jennifer Lopez, who became the judge and producer of the TV show, participated in a press conference in Beverly Hills devoted to the upcoming event and rose to the occasion. The actresses posed for photographers, and later the women were joined by colleagues: dancer Derek Hough and singer Ne-Yo.

In 2018, Jenna will play a minor role in the drama Berlin, I Love You. The actress’s partners on the set will be Keira Knightley, Helen Mirren, Luke Wilson, etc.

The woman landed the leading role in the musical Mixtape. The details of the upcoming project are not yet known. Dewan will play one of the title roles in the comedy The Wedding Year. Nowadays, the creators are preparing for a movie shoot.

Jenna Dewan has a net worth of $20 million.