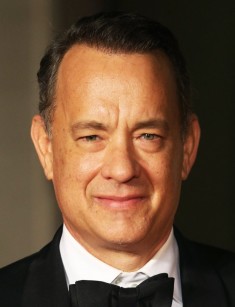 Tom Hanks is an American actor, film director, screenwriter and producer. He has two Oscar awards for his roles in the films “Philadelphia” and “Forrest Gump”.

Tom Hanks (real name - Thomas Jeffrey Hanks) was born in Concord, California. The boy was the third child in the family. Tom has an elder sister Sandra and a brother Larry. Amos Mefford Hanks, Tom's father, worked as a chef at the Concord Restaurant, and Janet Marylyn Hanks (Freger), the mother of a future celebrity, was an employee at a local hospital.

When Tom was five years old his parents decided to divorce. According to the Californian laws, his father got custody of three children. Tom spent his childhood with him. The family often moved, children regularly changed their school. They learned how to find friends quickly, and also how to say goodbye to people. In future, the actor often recalled that his father had a lot of girlfriends.

At high school, the boy became interested in theatre. Tom participated in school plays and after graduating from school, he entered the University of California to study dramatic art. During his studies at the university, Tom participated in the annual "Shakespeare Festival" several times, which was held in Ohio. Nevertheless, as soon as the actor's troupe from Cleveland made a proposal to Tom, the actor, without hesitation, left the university.

Fast enough, the young man jumped from theatrical stage to television. Hanks participated in several television series: "Taxi", "Happy Days" and "Family Ties". In addition, the viewers noticed the actor in the films "Mazes and Monsters" and "He Knows You're Alone".

Thanks to these roles, Tom Hanks drew attention of Ron Howard, who invited the actor to the main role in the romantic comedy "Splash". The film was positively received by the public. Hanks was offered roles in different films. But all of them were unsuccessful.

Another turning point in his career was shooting in the light comedy "Big", where the actor played a 13-year-old boy, who grew up dramatically overnight. Hanks' ability to gently show the child's fear in the big world increased the number of fans and brought him the Golden Globe as well as the first Oscar nomination.

Then he starred in such films as "Turner and Hooch", "The Bonfire of the Vanities", "Joe Versus the Volcano", "The terminal", "A League of Their Own". The roles in these films again had cool reviews of critics and the viewers. Although, Tom Hanks's acting skills were opened with a new side.

The most famous and popular roles of the actor were in the 90s. Hanks first played a lone dad in the movie "Sleepless in Seattle", released in 1993. Then he played a homosexual dying of AIDS in the film "Philadelphia", which was released in the same year. But the real triumph awaited the actor a year later when the director Robert Zemeckis produced the psychological film "Forrest Gump" in which the main role of the mentally ill man was played by Tom Hanks. The film was immediately awarded 6 "Oscars", including a statuette for the best male lead role, and the actor turned into a national hero.

After the triumphal procession on the red carpet, Hanks choose the most interesting roles. Therefore, there were few more outstanding works, which will be called the best films in Hanks' career: "Apollo 13", about the most dramatic moment of human exploration of the cosmos, "Saving Private Ryan", a legendary film that was subsequently included in the list of US cultural heritage, "You've Got Mail", a beautiful romantic comedy, "The Green Mile”, a screen version of the novel by Stephen King, and others.

"Saving Private Ryan" is the most notable film in the creative biography of the actor. Representatives of the cinematography highly appreciated the American actor's play in this film.

The audience also remembered the film "Cast Away", released in 2000. The fans demanded the continuation of the adventure drama but the directors decided not to create new series of the film.

In 2011, Hanks should have played in the movie "The Lost Symbol". But director Ron Howard, who produced "The Da Vinci Code" and "Angels & Demons" based on the same novels by Dan Brown, refused to produce it.

In the new century, Tom Hanks was still successful. The new film has become popular. The American worked with outstanding Hollywood stars: with Leonardo DiCaprio in the adventure comedy "Catch Me If You Can", with Julia Roberts in the comedy "Larry Crowne", with Emma Thompson in the biopic "Saving Mr. Banks" about the writer Pamela Travers, the creator of books about Mary Poppins, as well as with Hugh Grant in the historical-fiction film "Cloud Atlas" and other famous actors.

Critics have repeatedly noted the role with Sandra Bullock in the film "Extremely Loud & Incredibly Close", as well as with Meg Ryan in the comedy "You've Got Mail".

Tom appeared in the screen version of Jonathan Safran's books "Extremely Loud & Incredibly Close" and Dan Brown's "The Da Vinci Code", "Angels and Demons." "Inferno", the last film on the book of the writer.

Tom Hanks is one of the few famous actors of Hollywood, who does not appear in the yellow press. The actor is a wonderful family man, a caring husband, and a father.

In 1978, Tom Hanks married Samantha Lewis, a friend from the University of California. The common friends were surprised that at that time an unknown young man managed to win the heart of this girl, who had relations with rich men. Nevertheless, the wedding took place, and soon after that, Tom and Samantha became parents. Tom’s wife gave birth to their son, Colin, who later followed in the footsteps of his father. A little later, a daughter Elizabeth Ann was born.

But because of regular scandals on financial grounds as well as Samantha's weekends without her husband and children, they broke up.

In 1988, Tom Hanks married again. This time, his wife was the actress Rita Wilson. The couple has two sons - Truman Theodore and Chester Marlon.

Tom Hanks has already become a grandfather. In 2011, his granddaughter Olivia was born. In 2013, Olivia had a sister, Charlotte.

Tom and Rita have a calm and modest life. The couple regularly visits the church of the Patriarchate of Constantinople, since both are Orthodox.

The journalists also discussed the personal life of the celebrity, reporting that the married life of Tom Hanks and Rita Wilson has a serious crisis, but, nevertheless, the couple managed to overcome difficulties.

The American press reported that in 2016, a great grief happened in the Hanks family. Janet Frager, the mother of the actor, died at the age of 85. Soon, Tom confirmed this information on the Instagram.

In the same year, Tom Hanks accidentally got to the photo session of the newlyweds. During the run through the Central Park, Tom took part in the photo session, meeting a newly-married couple who decided to take a picture.

In an interview with The Huffington Post, the photographer said that the runner always got into the camera lens. He had to wait until the man leaves, but he did not hurry to do it. The athlete took off his baseball cap and said: "Hi, I'm Tom Hanks." The actor kissed the hand of the bride, said congratulations, and then made a selfie, which later placed on his Twitter.

In 2017, there was a photo of a Hollywood celebrity near UAZ-452 car, also known as a "loaf". The post was published by the actor on the Instagram.

"I have a new truck! Let’s go for a hike! "- Hanks wrote under the photograph.

The picture shows "UAZ" of the old model with Hungarian numbers. Russian-speaking fans of the American left under the photos a lot of enthusiastic comments. Some recommended Hanks to buy more "UAZs", although the actor did not mention that he bought this car.

The American film actor regularly posts the pictures in the social network. Most of all, Hanks likes small cars Fiat. These cars are most often found in the Hollywood celebrity photo blog.

In March 2017, the media reported that Tom Hanks gave an espresso machine to the journalists who work in the White House. According to the actor, American media representatives are obliged to "continue the struggle for truth and justice without feeling thirsty".

"Press Corps of the White House. Continue your struggle for truth, justice, and the American way. Especially for the truth, "- said Hanks.

It is known that in 2004, Hanks sent a similar gift to journalists. Tom explained that he did this when he found out that the employees in the White House were drinking coffee from vending machines. In 2010, during his visit to the White House, Hanks noticed that the coffee machine he presented was worn-out, and sent a new apparatus to the correspondents.

In April 2017, there was a premiere of the film "The Circle". Emma Watson and Tom Hanks, who appeared in the film, told reporters what helps them to keep their mind in the modern Internet world. Tom Hanks said that he likes social networks because he considers the Internet is just a tool that helps people communicate. 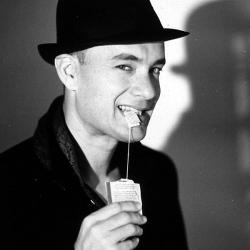