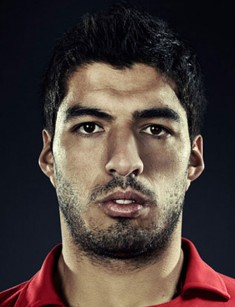 Some people call Luis Suarez an unbalanced psycho; others see him as the successor of the football legend Lionel Messi. For 4 years the insane desire to win helps the Uruguayan to be the leading forward of FC Barcelona.

On January 24, 1987, a retired military Rodolfo Suarez and his wife Sandra had a son, who was named Luis. The family lived in the second largest city of Uruguay - Salto.

Childhood of the famous forward was in an atmosphere of constant need and deprivation. Despite the fact that the parents took up any work, there was little money to bring up seven children. When Luis was 7 years old, his parents moved to the capital of Uruguay in search of a better life.

From the biography of the well-known striker it is known that Suarez expressed an interest in sports from childhood. His style of playing was formed on the streets of Montevideo, where he played football with his friends in the evening. Sandra strongly supported her son. The woman even managed to send her beloved child to the local football team.

In 1998 the parents of Suarez divorced. Louis, who was not even 10 years old, remained with six brothers and his mother. Without a role model before his eyes, the boy missed training, and preferred parties and alcohol at school.

It is not known what would have happened if, in 2002 15-year-old Suarez, had not met his future wife Sophia. She was a dream girl for him and he changed.

At the age of 17 (in March 2005), Suarez made his debut in the main team of the football club "Nacional". In August 2005, Louis again gets into the main team. In that season he scored 12 goals in 29 games and helped "Nacional" to become the champion of the country.

In summer, 2006 the 19-year-old football player goes to the Dutch "Groningen" for 800 thousand euros. It is noteworthy that scouts from Europe planned to sign a contract with another player, and Suarez was not even in their shortlist. But they noticed the energetic striker and decided that they need this boy. In the first season for the new club, Luis scored 10 goals in 29 games and received an invitation to the Uruguayan national team.

In his debut friendly match against Colombia, the young man received a red card for disputing with a judge. Despite this unpleasant incident, Suarez’s success at the club level wasn’t unnoticed, and in 2007 “Ajax” buys the football player for 7,5 million euros. In the season he scored 17 goals.

The second season for Suarez begins under the leadership of Marco van Basten. Despite the fact that Luis received a lot of yellow cards, arguing with his teammates and constantly arguing with the coach, in 31 matches he scored 22 goals. The 2009-2010 season becomes the quintessence of Suarez’s stay in Holland: he scored 35 goals in 33 games, and the new coach Martin Yola made Louis a captain of “Ajax”.

For the Uruguayan team it was hard to get into the 2010 World Cup. The first match with the French team ended 0: 0. Both teams showed themselves not from the best side. In the second match, Uruguay defeated the hosts of the tournament - the national team of South Africa – 3: 0. In that game, Suarez "earned" a penalty and organized the third goal. In the last match of the group level, Uruguay won Mexico 1: 0. The only goal in that meeting was scored by Luis.

In the 1/16 finals, Uruguay played with the South Korean team, the meeting ended in a 2: 1 win. Both goals were scored by the captain of "Ajax". In the quarterfinals, the national team of Ghana was waiting for Uruguay. In the additional time, with a score 1: 1, the Ghana national team players pressed the Uruguayan gate several times.

At one of these moments, Suarez took on the role of a goalkeeper and hit the ball with both hands. The judge removed him from the field and in the final seconds of the game there was a penalty. The captain of the national team of Ghana missed. In the post-match penalty, Uruguay won and for the first time in 40 years got into the semifinals of the World Cup. After that coach of Ghana Milovan Rajevats called the result of this game unjust, and Suarez - a real villain. Because of the removal, Luis missed the match with Holland, which Uruguay lost 2: 3.

In the 2010-2011 season, Louis scored his 100###sup/sup### goal for Ajax and stood in line with such players as Dennis Bergkamp and Marco van Basten. In November 2010, in a match against PSV Luis for unknown reason bit the neck of the midfielder of the Dutch club Othman Bakkal. For his behavior, the striker was disqualified for seven matches.

In January 2011, a transfer window was opened. The Ukrainian "Shakhtar" and St. Petersburg "Zenith" were interested in the scandalous striker, but Louis said that he was not going to play for these clubs.

On January 28, 2011 the football player moved to Liverpool for 26.5 million euros. In this season there was another scandal: on October 15, 2011, in the match with Manchester United, Suarez told unpleasant words to a black defender of opponents - Patrice Evra. After this, Evra accused Louis of racist remarks.

The trainer and fans of Liverpool defended the football player, saying that the press inflated the hype from scratch. FIFA made an investigation and found Suarez guilty. He paid fine and had an eight-match suspension. In the 2012-2013 season, Luis scored 23 goals in 33 games.

On April 21, 2013, "Liverpool" hosted at its stadium the London "Chelsea". At the beginning of the second half Suarez played with his hand in his own penalty area and caused a penalty. The football player once again did not restrain emotions and bitten the defender Branislav Ivanovich. Luis was disqualified for 10 matches.

In the 2013-2014 season Suarez played as a whole with Daniel Sturridge and scored 31 goals in 33 games. No one scored more goals that year. Only Cristiano Ronaldo was as effective as Suarez. Luis signed a new contract with the club and became the highest paid player of Liverpool.

In the 2014 World Cup, Uruguay fell into the "death group" along with Italy, England and Costa Rica. Suarez came to the championship after surgery on his left knee and did not participate in the first match, which Uruguay lost to Costa Rica. In the second game against England, Luis scored two goals.

In the game with Italy on the 79th minute of the match Suarez faced in the penalty area of the opponent team with Italian defender Giorgio Chiellini and bit his shoulder. The judge left this incident without attention. After the game, the FIFA disciplinary committee disqualified the football player for nine international matches. Despite the incident, on July 11, 2014, the Spanish "Barcelona" announced Suarez the player of a "blue-garnet" team.

Luis missed the pre-season training with the team and almost half the season because of disqualification. The Forward could not even watch the training of his new team. After a series of appeals he was allowed to participate in friendly matches.

Luis made his debut for Barcelona on October 25, 2014 in a game against Real Madrid. Suarez, who formed a bunch with Messi and Neimar, scored a lot of decisive balls, improving his statistics.

In 2016, "Barcelona" bought the midfielder Denis Suarez. At the first training, the ambitious young man said that he would do everything possible to put on a T-shirt with number six (once the midfielder of the Catalans, Xavi, played under this number). Louis seriously advised the newcomer to talk less and do more.

Luis Suarez and Sophie Balbi had a wedding in 2009 in Montevideo, the city in which they first met. On August 5, 2010, the couple had a daughter, Delfina. And on August 26, 2013 the son Benjamin was born.

For Suarez, his wife and children are the most important things in life. The Footballer repeatedly said that if he had to choose between career and family, he would choose the second without thinking.

One of the most successful forwards in the history of football in the near future does not plan to finish his career and hang boots on the nail. In 2017, Suarez continues to defend the honor of FC Barcelona.

In his Instagram, Louis post video cuts from training, photographs of family vacations, and also uses a social platform to promote the football attributes (professional equipment, equipment and sports nutrition) with which he cooperates.

Among other things, the famous athlete is a frequent guest on television and radio programs. In interviews, he talks about both career and personal life.

• The top scorer in the history of the Uruguayan national team (47 goals);

• The best scorer of the qualifying tournament of the World Championship (2014, 11 goals);

• The only player who scored 5 goals in the Club World Cup;

• The record holder of " Barcelona" in the number of goals in the Club World Cup (5 goals);

• The record holder of "Barcelona" who scored more goals for the first 100 matches (88 goals);

• Joined the symbolic team of the year according to "France Football" (2015);

• Joined the symbolic team of the world according to FIFA (2016); 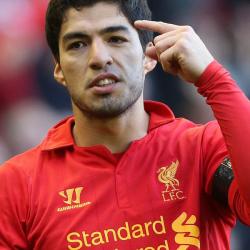