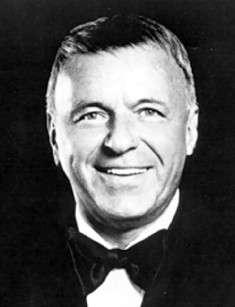 New York, New York,” “My Way,” “Love Story,” and “Over and Over.” In his heydays, the master starred in movies, performed on the radio, produced movies, and had his own TV show. Sinatra had 11 Grammy Awards and two Academic Awards.

Frank Sinatra was born on December 12, 1915, into a family of Italian emigrants. The newborn baby weighted 6 kg. The boy’s full name was Francis Albert Sinatra.

Frank’s grandmother and aunt often looked after the child. His mother paid much attention to social activities, and the father worked in docks. Martin and Dolly Sinatra were typical members of the American working class in the early 20th century.

Young Sinatra got interested in music. He used his Hawaiian guitar playing skills to earn his pocket money. Because Sinatra played truant and neglected schoolwork, he was dismissed from the middle school. The naturally artistic boy developed his abilities independently: he was not acquainted with solfeggio and sang by ear.

Sinatra is considered to be the only person who managed to repeat his early success when he aged. One of the most famous songs “New York, New York” was recorded in 1979, when the singer was already 64. The song became the landmark of the city and is still used as unofficial hymns of the city.

Throughout 50 years of his career, the singer recorded more than a hundred hit songs. Frank performed songs by George Gershwin, Cole Porter, Irving Berlin, and many other famous composers of those times. About 60 albums were released in his life. The Christmas songs collections by Sinatra continue to be extremely popular in America.

“Strangers in the night,” “New York, New York,” “My way,” “Fly me to the moon,” “Jingle bells,” and “Let it snow” are the most famous songs by the master all over the globe.

Officially, the singer was married four times. Sinatra’s personal life was the object of the utmost attention of journalists which resulted in the divorce with Frank’s first wife. The singer hated the press representatives for the rest of his life.

Nancy Barbato was the singer’s first love. They married in winter 1939 and had three wonderful children. The elder daughter was born in 1940. She was named after her mother and devoted her life to music just like her father. In 1944, Frank Sinatra Jr. was born; he also became a musician. The daughter Tina was the youngest child; she found herself in the movie business.

After Sinatra divorced Nancy, he found comfort with the actress Ava Gardner. The lovers married several years later after their relationship began. For Ava, it was the third marriage.

At the beginning of the family life with Gardner, Frank suffered from a harsh artistic block. The singer had to face successive failures and found himself professionally unclaimed. As Frank lost his voice after the bad cold complications, he wanted to commit suicide, yet his wife was by his side and supported him. Sinatra came back to the stage. In 1952, his concerts were popular again. Sinatra and his wife lived together for approximately 6 years.

At the age of 51, the singer married for the third time. Sinatra and his 21-year-old lover Mia Farrow married in 1966; media published a lot of scathing articles. Thanks to the husband’s name, Mia managed to improve her acting career. The young wife also helped the singer overcome another artistic crisis. One year after the marriage, Mia Farrow and Frank Sinatra broke up.

In 1976, Barbara Marx became the singer’s fourth wife. She was the last official partner of Sinatra and lived with him until his death. Biographers often criticize Barbara and call her the inheritance hunter. The couple lived together for 22 years.

Frank Sinatra was not only a talented singer and actor but also a famous ladies’ man. His women were unusually beautiful and talented; many well-known actresses, singers, and models were among his lovers. Young and old, Frank could charm a woman he liked by his “velvet” voice and manners.

Apart from the four official marriages, the singer had two broken engagements. The engagement with Humphrey Bogart’s widow Lauren Bacall was broken off by Sinatra because of the early announcement. The actress’s friends told reporters about the upcoming wedding, and journalists occupied the singer’s house. Sinatra believed Lauren had betrayed him and split up with her.

The second engagement with Juliet Prowse was broken off in 1962, a month and a half after it was announced. The bride initiated the break-up since she made a decision to concentrate on her career. Sinatra also had love affairs with Lana Turner, Gina Lollobrigida, Shirley MacLaine, Donna Reed, and Jill St. John. Frank and his women usually split up in harmony, with no scandals and accidents. Sinatra met many of them during movie shooting and maintained friendly relations after their breakups.

The actor’s charm helped him build a good career in movies. Sinatra did not study acting or take drama classes – his acting and musical skills were native. Throughout his career, Frank played in 46 movies.

In 1965, the actor tried directing the movie “Only the Valiant”; it was a single experience. However, Sinatra produced 6 movies. It is peculiar that the singer’s children chose the professions that followed their father’s activities. For instance, the younger daughter produced movies as well.

“From Here to Eternity,” “Ocean's Eleven” (1960), “The Manchurian Candidate,” “The Man with the Golden Arm,” “The Detective,” and “Around the World in 80 Days” are the most famous movies starring Sinatra. His work in movies was greatly appreciated: the actor won two Academy Awards and two Golden Globe Awards.

• In his youth, Sinatra hardly escaped the danger of prison because of his love for a married woman. In the early 20-century America, a love affair with another man’s wife was a crime and could negatively influence the singer’s career.

• There is a theory that Sinatra had connections with the mafia. In fact, the singer did not keep secret that he was personally acquainted with some criminal authorities. Rumors had it that the mafia eliminated his ill-wishers – the singer considered journalists who were too much interested in his personal life and affairs his enemies.

• Frank Sinatra treated Audrey Hepburn warmly and gave the rising star the nickname “Princess.” It is interesting that the actress played a royal person in 1953 in the movie “Roman Holiday.” Sinatra’s wife Ava Gardner was a candidate for this role, but producers chose Audrey Hepburn.

• Frank’s elder daughter posed for Playboy cover. At the moment of the provocative photo session, Nancy Sinatra had celebrated her 54th birthday.

• Frank was not only a singer and actor but also a famous showman. The most popular show-business personalities appeared in Sinatra’s TV show. After the demobilization, young Elvis Presley participated in Sinatra’s program. By the way, two singers’ relations were not particularly warm. Frank did not like rock-n-roll and called it the music of degenerates which Elvis Presley could not stand.

• In 1960, the singer purchased a casino. When he learned that Chicago gangster Sam Giancana was one of his partners, he had to reject his part in the business to keep his reputation safe.

• Modern biographers who study archives put forward a theory that the singer had a love affair with Marilyn Monroe. The plausibility of the statement is still questioned. It is known that Frank and Marilyn met in 1954. Several biographic books based on Marilyn’s and Sinatra’s close people provide the ambiguous information about their relations.

• According to one of the versions, Frank was head over heels in love with the diva but she rejected him; according to another, Marilyn was in love with the singer who did not want to ties himself to her. It is also suggested that Sinatra and Monroe had a secret relationship. This love story provoked a public outcry, and the interest does not fade away even 50 years after the actress’s death. Some people even guesstimate that Monroe could have committed suicide because her love for Sinatra was not returned. The photos of the singer and the actress do not deny or support the secret affair theory.

The singer announced the end of his stage career in 1971, but he did not retire that year. In 1973, the master recorded a new studio album “Ol' Blue Eyes Is Back”; since 1974, he restarted his concert activities. The last song collection was released in 1993; in 1995, Sinatra came to the stage for the last time.

On May 14, 1998, the legendary singer died of a heart attack at the age of 82. The funeral took place in Desert Memorial Park, Cathedral city, California. 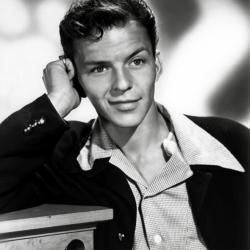