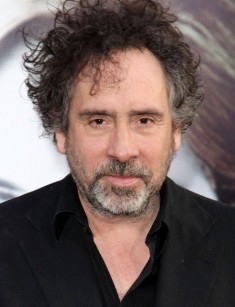 Timothy Walter Burton, better known as the director and animator Tim Burton, was born in August 1958 in the Californian town of Burbank. He did not have a very bright memory from his childhood, but it was these years that left a decisive mark on the work of Burton and brought him black humor and macabre elements.

The Burton family seemed a happy one, as besides Tim, there was the younger son and his parents had a good stable income, but the boy was alone and isolated. He did not like noisy companies. He spent time in his room, where windows for some reason were walled up and turned into narrow slots. Timothy read Edgar Allan Poe and visited the cinema, where he mostly watched science fiction and horror movies.

A municipal cemetery was not far from the Burton house. There were also offices of the Walt Disney studios, Columbia Pictures and Warner Brothers in the neighborhood with Tim's house. It can be said that this was the allegorical "picture" of all further creation of the director who created Edward Scissorhands.

In 1976, Tim Burton left his uncomfortable town and went to Santa Clarita, the Californian city, where the Institute of the Arts, founded by Walt Disney, was located. The future director and animator comprehended the basics of the profession there.

In 1979, Burton was admitted to the Disney studio, where he worked as an animator and animated character designer for several years.

Tim Burton's cinematic biography began after he shot his debut short-length films. It was a six-minute cartoon Vincent and a short animated film Frankenweenie. The studio did not dare to release Frankenweenie on screens, considering it incompatible with the image of Walt Disney.

Burton sent copies of Frankenweenie to different studios and managed to attract the attention of the famous American producer and comedian-actor Paul Reubens. He entrusted Tim to shoot the full-length movie Pee-wee’s Big Adventure. The film was a great success, including commercial. While working on it, the young director met with composer Danny Elfman, who subsequently cooperated with Tim Burton.

The first director’s success compelled the Warner Brother’s company to entrust Burton screen version of the comic book about Batman. During this period Tim shot the fairy-tale film Aladdin and His Wonderful Lamp and detective horror film Alfred Hitchcock Presents — The Jar.

In 1988, the horror film with elements of mysticism Beetlejuice was released on the screens and it was included in Top 500 Horror Movies. The film received the Oscar for Best Makeup. During the next two years, viewers saw new films of Tim Burton, which brought him world fame. It's Batman and Batman Returns. These films marked the revival of the era of Batman in cinematography and brought fame to the director as the best creator of Hollywood blockbusters.

In last decade of the twentieth century, Tim Burton's cinematic biography developed rapidly, reaching the Olympus heights. Such movie hits as Edward Scissorhands, Sleepy Hollow, and Planet Of The Apes were released on the screens. The director even had his favorite actors. This is Helena Bonham Carter and Johnny Depp.

In the new century, Burton continues to delight his fans with new hits. The most popular ones are masterpieces Charlie and the Chocolate Factory, Sweeney Todd: The Demon Barber of Fleet Street, as well as the cartoons Corpse Bride, Alice in Wonderland and Dark Shadows. They all are highly appreciated by spectators and critics. Today, Tim Burton is a real star and the legend of Hollywood.

Biographies of the director share the view that Burton’s creativity was greatly influenced by women who were close to him during different periods of life. Tim’s first wife was photographer Lena Gieseke. But this marriage was short as the couple lived together for 2 years.

The second wife of the director was stripper Lisa Marie. They got engaged in 1992 and lived until 2001. The director gave her roles in almost all the films he shot during this period. Lisa Marie appeared in such hits as Edward Scissorhands, Ed Wood, Sleepy Hollow and many others.

While working on the project Planet Of The Apes in 2001, the personal life of Tim Burton goes to a new round. He fell in love with actress Helen Bonham Carter. The director broke up with his ex-wife, paying her more than $ 5 million.

In the autumn of 2001, Tim and Helena Bonham got engaged. Two years later they had a son, Billy Raymond, whose godfather was Johnny Depp. And in 2007, daughter Nell was born.

At the very end of 2014, Tim Burton and Helena Bonham Carter broke up. They lived together for 13 years.