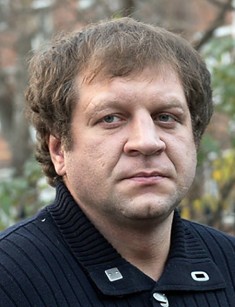 Alexander Vladimirovich Emelianenko is a professional fighter of mixed martial arts, multiple champion of Russia, Europe and the world in combat sambo, master of sports in sambo and judo.

Alexander was born on August 2, 1981 in Stary Oskol, Belgorod region. Parents of the boy - a welder Vladimir Alexandrovich and a teacher Olga Feodorovna Emelianenko - brought up four children: a daughter Marina and 3 sons Fedor, Alexander and Ivan.

His elder brother Fedor Emelianenko has been training since childhood. He always took small Sasha with him, who soon began to show interest in sport. At the age of 7 Alexander entered Sambo and Judo section. The coach of the boy was Vladimir Voronov.

After 9 grade, Sasha entered technical training college in Stary Oskol, where he received the profession of a welder. At the same time, the young man did not stop training, gradually improving his results. In 1998 Alexander was awarded the title of master of sports in judo. After graduating from college in 1999, the young athlete performed at the European Combat Sambo Championship and received the first gold medal.

In early 2000s Alexander signed a contract with the company Russian Top Team, where he trained with the stars of Russian sports Andrei Kopylov and Volk Han. His elder brother Fedor was also in this corporation. Emelianenko brothers experienced strict control from the vice-president of the World Sambo Federation Valery Pogodin. And shortly after Fedor received the belt of Pride heavyweight champion, the brothers went to the company Red Devil. The manager of the company was Vadim Finkelstein.

By 2003 Alexander received the title of master of sports in sambo, and then three times - in 2003, 2004 and 2006 - became the world champion in this category. In the same year he entered the economic faculty of the Belgorod State University. He graduated from the university in 2009.

The first fight of Alexander Emelianenko took place in 2003 at the competition of the largest at that time organization MMA - Pride. The Russian athlete had fight against the Brazilian Assuerio Silva, who was defeated by the decision of the judges. The next time Emelianenko fought against the three-time winner Meca Vale Tudo and the finalist of IVC 14, the Brazilian sambo wrestler Angelo Araujo at the Inoki Bom-Ba-Ye tournament. Alexander again won the competition. In 2004 there was a tournament against champion in the Australian version of Spartan Reality Fight Matt Foki, in which Alexander won.

The first defeat of Alexander Emelianenko was in a battle with the Croatian Mirko Cro Cop. There were already 35 fights. Experienced athlete knocked out the newcomer Emelianenko using hi-kik. Two months later, Alexander met Carlos Barretto, who finished his sports career. Super fight took place in the championship Mix-Fight M-1 Middleweight GP. Defeating the opponent, Alexander Emelianenko went to Pride, where he took part in a competition against the Englishman James Thompson. The victory was followed by the knockout of the enemy in the first minutes of the battle.

Alexander also knocked out his opponents the IAFC champion Ricardo Morais and Dutchman Rene Rooze. In 2005 Emelianenko met the Polish fighter Pavel Nastula, who in many ways surpassed the Russian. After the exhausting struggle, Alexander won another victory.

A year later, there was the Grand Prix Pride Grand Prix tournament, in which Emelianenko fought against Josh Barnett and Sergei Kharitonov. The second athlete, the former team-mate of Alexander, almost knocked down Emelianenko three minutes after the start of the fight. But after a short struggle, Sergei missed a number of strong punches and fell. The battle was one of the most interesting in the sports biography of Alexander. The video of the tournament is available on YouTube. The athlete completed his cooperation with Pride.

At the next tournament at 2H2H Pride and Honor, which was held in Holland, Emelianenko lost to his opponent Fabrício Werdum, the master of Brazilian jujitsu. After almost a one year break, Alexander appeared in the ring with Eric Pele in the "Battle of Nations" competition in St. Petersburg. The tournament was attended by the presidents of Russia and Italy - Vladimir Putin and Silvio Berlusconi. Alexander Emelianenko won. The next tournament of Alexander was M-1 MFC "Russia vs. America", at which the opponent of the Russian fighter was the athlete Jessy Gibson. Alexander almost lost, but, using a painful method using the elbow, he knocked out the opponent.

In the same year, Emelianenko visited Hardcore Championship Fighting Title Wave in Canada. The opponent of the Russian sportsman was the UFC champion Dan Bobish, whom Alexander knocked after the first minute of the fight. Returning home, the fighter took part in the super fight against Silvao Santos in St. Petersburg on the M-1 Challenge. The Russian athlete won (Alexander's height is 198 cm, weight - 115 kg). In 2009 there was a fight with Ibrahim Magomedov, whom Alexander sent to the mat in the first minute of the competition.

Professionally, Alexander Emelianenko began to fight in autumn 2009 after signing a contract with the promotional company Golden Boy Promotions. Master of mixed martial arts debuted in a charity tournament dedicated to the founder of Russian boxing E. Lypynsky. Alexandra fought against Khizir Pliev. The fight lasted four rounds, according to the decision of the judges, a draw was declared.

At the end of 2010, the sportsman had a fight against Peter Graham in the BodogFight tournament, but he lost. After an annual break in sport, Emelianenko fought against Magomed Malikov and again lost in the first seconds of the round. In 2012 Emelianenko rehabilitated his name with three fights against Konstantin Glukhov, Ibragim Magomedov and Tadas Rimkevicius, but in the fourth competition he was defeated by American Jeff Monson.

In December of the same year, the M-1 company headed by President Vadim Finkelstein terminated the contract with Alexander, because of violations of the athlete. In the press, there were speculations that the cause of the termination was drunken scandals with Alexander Emelianenko. The fighter took a break and decided to spend three months on Aphon, in one of the monasteries.

In 2004, after moving to St. Petersburg, Alexander Emelianenko met his future wife Olga Gorokhova. In 2007, Alexander and Olga had a wedding, and few months later their daughter Polina appeared. Because of the constant differences, the couple broke up in 2011.

For some time the fighter was constantly involved into drunken scandals. In 2013, the athlete appeared in "Comedy Club". In 2014, Emelianenko was accused of having assaulted and raped 26-year-old Polina Stepanova. The sportsman was in an all-Russian wanted list. In May 2015, Alexander was sentenced for 4.5 years, and was sent to Borisoglebsk colony of general regime in the Voronezh region.

Waiting for the verdict and being in the walls of the Moscow SIZO "Butyrka," Alexander Emelianenko registered a second marriage with a 22-year-old Polina Seledtsova. At the end of 2016, the fighter was released on parole after 2.5 years in prison.

Alexander Emelianenko also gained fame because of his tattoos, which now cover most of his body. Throughout his life, Alexander applied a criminal tattoo: stars, cobwebs, a church with domes, a free interpretation of the image of the Virgin on his back. Numerous photos of Alexander's tattoos can be seen on the athlete's account in Instagram.

Now Alexander Emelianenko lives in Moscow, where he has regular independent training sessions and works with young people in the sports section. In 2017 Alexander is going to continue his sports career,.

• Three-time champion of Russia and the world in combat sambo

• European champion in the category of combat sambo

• Master of Sports of Russia in Sambo

• Master of Sports of Russia in judo 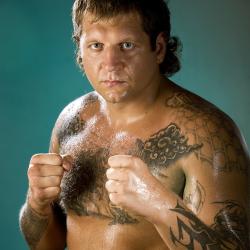