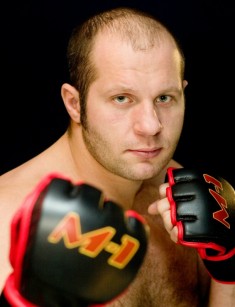 Fedor Emelianenko was born on September 28, 1976 in the Ukrainian town Rubezhnoe. Vladimir Aleksandrovich, the father of the future sportsman, worked as a welder. Olga Fedorovna, Fedor's mother, worked as a teacher at school. Fedor was the second child in the family. There were four children in the family.

In 1978, the family moved to Russia in Stary Oskol town. There they lived in a communal apartment - the family got a small room, originally it was used for laundry drying.

At 10 Fedor went to the judo and Sambo section, where he trained under the guidance of Vasily Gavrilov. The boy devoted most of his free time to training, sometimes even stayed in the gym at night. The future sportsman took his younger brother Sasha with him. Later, Alexander also became a professional athlete.

After a year of successful training, Fedor Emelianenko, as a promising student, was offered to go to Vladimir Voronov's class. After graduating from high school, the guy went to study at the technical training college. And in 1994 he received a red diploma of an electrician.

In 1995 Emelianenko joined the Russian army, where he was until 1997. Being in the army he didn’t forget about training. Fedor gained muscle mass by more than 20 kg.

From 2003 to 2009, Fyodor studied at the Faculty of Physical Culture and Sports at Belgorod State University. At the university the athlete completed postgraduate studies.

In late 90s, the athlete moved to the MMA, cooperating with a Japanese organization "Rings". Under the auspices of this organization Emelianenko has gone through 11 fights, losing only once. The sportsman lost the final fight. His rival used a prohibited method with his elbow: as a result of double dissection, the athlete was dropped out.

In 2000 the wrestler began to intensively study the technique of boxing under the leadership of Alexander Michkov. At the same time, Fedor joined the Russian Top Team. Three years later, Fedor left the club, pointing out the disrespect of the manager Vladimir Pogodin. Soon the fighter joined the Red Devil Fighting Team.

Nevertheless in 2001 the Russian athlete became the champion of "Rings". Then, noticing the success of the fighter, he was invited to Pride. Emelianenko believes that there he had his best fights. His victory ended with a meeting with the Dutch athlete Semmy Schilt, the American Heath Herring, the Brazilian Antonio Rodrigues Nogueira, who remained undefeated before that for 6 years.

2004 was a successful year in the biography of the Russian wrestler. There were a lot of victories. Firstly, the athlete defeated Mark Coleman, then Kevin Randleman. On the last day of December, Emelianenko had his second fight with Nogueira and won the fight, confirming the champion title of the organization.

In 2005 there was a fight against the most dangerous opponent in the Japanese period of his career - the Croatian Mirko Cro Cop. This fight will be called one of the best in the career of the Russian fighter.

Gradually the statistics of his battles began to change, the defeats began. In the following years, Fedor Emelianenko had a series of battles that were not so successful, and in 2006 “Pride” became bankrupt. After the bankruptcy of Pride, despite the rumors that Emelianenko will fight for the famous American club, the athlete chose the M-1 Global. On the one hand during this period he had less fights, but on the other hand there was an increased attention to Fedor at home.

Then there was a fight with a Korean representative Choi Hong-man, which ended in a bright victory for the Russian fighter. Then, defeating Tim Sylvia, the Russian became the champion of WAMMA. The new champion defended his title in 2009, after fight with Andrei Orlovsky from Belarus.

The expected event was the signing a contract with Strikeforce, according to which the athlete was required to have three fights. The athlete won the first fight against Brett Rogers. But the other two meetings - with Fabrício Werdum and Antonio Silva - ended in defeat for him. Nevertheless, The Russian is called the best in MMA.

After unsuccessful fights, the athlete first talked about the possible completion of his career. But soon Emelianenko pleased his fans with new victories and knockouts. At the end of 2011, Fedor defeated Jeff Monson, and few months later he had a successful fight with Pedro Rizzo - after this fight the wrestler announced that he would leave the ring.

On July 14, 2015 Fedor Emelianenko officially announced his intention to continue his sports career. The return of the "Last Emperor" (nickname of Fedor Emelianenko) took place in a duel against Indian fighter Jaydeep Singh. Today Emelianenko is the president of the Union of MMA of Russia.

The Russian songwriter Semen Slepakov even made a composition about the Russian athlete. Yemelyanenko in an interview said that he did not like the song.

Fedor Emelianenko met Oksana, his first wife, in the pioneer camp as a schoolboy. Fedor was at the sports camp, and Oksana was a pioneer leader. Their relationships were quite serious - the girl was waiting for him from the army. In 1999, the couple had a wedding, in the same year Oksana gave birth to their daughter Masha. The marriage lasted 7 years - in 2006 the couple filed for divorce.

In 2007, his good friend Marina gave birth to a girl Vasilisa. Two years later the couple got married, and a year later they had a daughter, Elizaveta.

In 2013 the couple broke up. The athlete began relations with his first wife Oksana. They had a wedding ceremony in winter in 2014.

In 2016 Fedor Emelianenko's last fight against the Brazilian Fabio Maldonado took place. The battle between Emelianenko and Maldonado was a part of a cultural program at St. Petersburg International Economic Forum-2016. The experts predicted a victory to the Russian athlete, but it was difficult for him to win his opponent. The video of this battle became popular on the Web.

On February 19, 2017 a new fight of Emelianenko was planned. At this time, the rival of the Russian supposed to be an American Matt Mitrione, but there was no battle. It is assumed that Emelianenko will fight against the US representative in June 2017 in San Jose. If Mitrione does not get better by this moment, the Russian will fight with another rival.

In 2017, Emelianenko commented on the incident of beating the vice-president Radmir Gabdullin by the brothers Gadzhimurad and Gamzat Hiramagomedov, who also were the members of the MMA Union. According to Emelianenko, such actions should not go unpunished.

Fans closely follow the news of the life of their idol, as well as training and appearance (Fedor's height - 182 cm, weight - 107 kg) of the legend of Russian sport.

In April 2016 the first of four Russian films about the famous fighter "The World of MMA" was released.

• World champion in combat sambo in the absolute weight category

• Winner of the international judo tournament 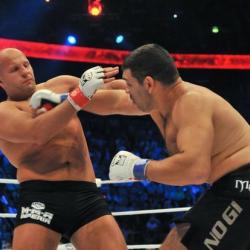