Fyodor Smolov is the Russian soccer player, soccer club Krasnodar and Russian national team forward who managed to become the best attacking player of the main championship of the country two successive times.

Fyodor Mikhaylovich Smolov was born in Saratov on February 9, 1990. The would-be soccer player and his family lived in the crime-ridden neighborhood of the city outskirts. This fact made the parents think how they could protect their son from the bad influence of this environment. When Fyodor was 7, the father took him to the soccer club Sokol.

It is peculiar that the boy did not support his home city soccer club: Fyodor admired Lokomotiv Moscow and dreamed of becoming its member one day. Soon, the father started insisting the son should leave soccer. Fyodor asked the father to allow him to take the last examination and convinced him he would quit the sport if he would not succeed.

The soccer club Master Saturn from Yegoryevsk, the Moscow region, gladly admitted the promising young man, and Fyodor continued to master his skills in his favorite sport.

At 16, Fyodor Smolov signed the first professional agreement with Dinamo Moscow. The next year, he debuted in the Russian Premier League against Luch-Energiya Vladivostok. One year later, Smolov scored his first official goal to the gates of Krylia Sovetov Samara.

In 2010, the administration of Dinamo decided Smolov should have a constant practice in games. The player had loan-deals with the Dutch Feyenoord, Anzhi Makhachkala, and Ural Yekaterinburg. As the soccer player himself confessed, he was not involved in soccer to the full extent before his work in the Netherlands and spent much time doing irrelevant things. The first loan contract gave him the chance to reconsider his priorities and become a professional.

In both of these clubs, Smolov was in good standing; Ural Yekaterinburg fans even called the forward the best player of the team twice. In Anzhi Makhachkala, Fyodor won bronze medals just like he did before in Dinamo. In summer 2015, Smolov’s contracts with Ural Yekaterinburg and Dinamo Moscow expired; the sportsman and the Moscow club decided not to extend the agreement.

Thus, Smolov joined Krasnodar as a free agent. The forward became the key player of the club and had the turning point in his sports career. The player began to score regularly in the home competition and European Cups; thanks to Fyodor, Krasnodar defeated CSKA Moscow, the future champion, for the first time in that season. Besides, the player had a hat trick in the game with Krylia Sovetov and “poker” (4 goals in one game) to the gates of Ural Yekaterinburg where he used to play. Soccer fans remember the videos of these goals even today.

Experts believe Somolov’s results are related to his physique: his height is 187, and his weight is 80 kg. The attacker has a good speed and can choose the best position on the field at scoring moments.

There is only one soccer player who scored three goals in a game in 2015/2016: Spartak Gogniyev. These achievements gave the young soccer player the opportunity to become the best attacking player of Russia for the first time in his career. Many fans hoped the striker would be able to help the national team in the 2016 UEFA European Championship in France, but it did not happen.

Victoria is 7 years older than the soccer player, but it did not prevent their serious romantic relationship from developing. The young man proposed to his beloved one six months later. In December 2013, Smolov and Lopyreva had a romantic wedding ceremony in the Maldives.

Fyodor and Victoria lived together for two years and then split up. The couple was not married according to the Russian law, so there was no need in the legal divorce proceedings.

The press informed the soccer player was seeing the young photo model Miranda Shelia, but the couple stopped communicating in July 2016. It is interesting that Miranda is often compared to Irina Shayk, another beautiful model who used to be Cristiano Ronaldo’s lover.

In fall 2016, the Russian media reported Fyodor Smolov was dating Sofia Nikitchuk, the Miss Russia 2015 winner. Later, the model confirmed she had an affair with the Russian soccer player.

Fyodor Smolov likes tattoos. The sportsman had his first tattoo at 17, and now even he cannot say how much tattoos he has: they fuse and form a single picture. The soccer player is also fond of reading: criminal detectives a la Mario Puzo and Arturo Pérez-Reverte, Fyodor Dostoevsky’s novels, and Mikhail Bulgakov’s works are his favorite books.

The Krasnodar striker has become the best attacking player of the Russian championship two times in a row. In 2016/2017 season, the forward outran his opponents and placed the first among the best goal-scorer of the championship: Smolov scored 18 goals.

The forward does not keep secret his desire to take part in a European competition with strong rivals. It is known that Borussia Dortmund was negotiating the player’s transfer but the discussion failed.

The soccer player said he was upset with the negotiation results.

“This winter, I was close to transferring to another club. I had been waiting for the transfer to Borussia, the negotiations were going on throughout the whole transfer window. I took it hard when the deal was not completed,” marked Fyodor Smolov.

The Krasnodar administration was also negotiating with Chinese clubs that offered the soccer player €10 million for a season. According to Smolov, he was not interested in it because the probability to go to Europe in this scenario was extremely low.

Some soccer analytics guesstimate that Fyodor may have new advantageous offers from European soccer clubs after the FIFA Confederations Cup if he does not lose steam and continues to play to a high standard.

Fyodor Smolov admitted in one of his interviews that he played soccer not for the sake of money – he could not imagine his life without this game. As he rejected the Chinese offer, he lost the chance to earn a large sum of money but gained fans’ support. According to Sports.RU, Smolov earns €2,5 million annually. Taking into account the forward’s good results and other Russian Premier League players’ benefits, these figures are small.

“My purpose is to play at the highest level and win some top European championship. I aim at trying myself there. My dream is different: I want to play for Milan and win the UEFA Champions League. I have been supporting this team since 7,” confessed the Russian forward.

Smolov’s performance at the FIFA Confederations Cup was successful. The sportsman hopes to focus on this competition so that he could go on the soccer field as a constant national team member. In this championship, Smolov managed to score to the New Zealand’s gates.

As the head coach of the Russian national team Stanislav Cherchesov commented on his mentee, he told the press that Smolov took the first step to the English Premier League. According to the Russian coach, the sportsman’s play was excellent, and his goal to the New Zealand’s gates increased his chances to get to a European soccer club.

The soccer player’s fans are actively discussing their favorite’s future. Many fans take part in discussions on Instagram and other social networks and argue about the forward’s perspectives. 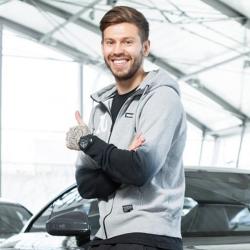