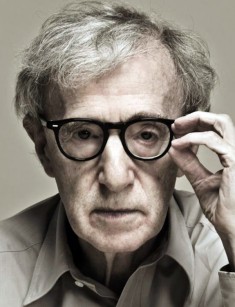 Heywood Allen Stewart Konigsberg, better known as Woody Allen, was born in New York in December 1935. His grandparents were German immigrants and they spoke Yiddish and German. Heywood Allen Stewart was the eldest child in the family of Nettie and Martin Konigsberg. Daughter, Letty was born 8 years later (she is now the producer of Woody Allen’s film). The parents of the future director were born and grown up in Manhattan, but later moved to Brooklyn. Nettie worked as an accountant in the confectionery store owned by the family. Martin worked as an engraver and jeweler.

Heywood Konigsberg studied in a Jewish school for 8 years. Classmates called him Redhead for the color of the hair. But Heywood could stand up for himself, though he seemed a weak and puny boy. He was a good baseball player and played well in basketball. And the guy gained a good reputation for his inherent sense of humor. He wrote humorous articles for the school paper and took the pseudonym Woody Allen. These articles brought him his first earnings. When he was 16 years old, Allen was noticed by a comic artist Milt Kamen. He gave Woody a job of a humorist in Sid Caesar’s show.

After high school, Woody Allen entered New York University, where chose the Cinematography Department. But he didn’t study there for a long time, as he was not a diligent student. Woody attended one of New York colleges for a while, but he left it too. The young man had to make his living. He wrote sketches for various newspapers, worked as a comedian in nightclubs of the city. Producer Charles Feldman saw one of these performances. He offered witty Woody to finish a comedy. A year later the film What's New Pussycat was released, where Allen debuted as a screenwriter and an actor.

The first success inspired Woody Allen. He played secondary roles and undertook the completion of other scenarios. But soon he began to realize that he could build his own career and shoot movies himself.

Woody Allen’s cinematic biography began with Feldman’s comedy and developed rapidly. In 1966 he made a parody of the movie What's Up, Tiger Lily? directed by Senkichi Taniguchi. Three years later, Allen shot a film Take the Money and Run. He not only wrote the script for the movie but also played a major part.

Then, Woody Allen took the whole film-making process into his own hands. He wrote scripts, shot movies and played as an actor. He shot such films as Play It Again, Sam, Everything You Always Wanted to Know About Sex* (*But Were Afraid to Ask), Annie Hall, Manhattan, Wild Strawberries. A Midsummer Night's Sex Comedy, Broadway Danny Rose, The Purple Rose of Cairo, Hannah and her Sisters and many others, that were warmly received by viewers and critics.

The movie Annie Hall occupies a special place in Woody Allen’s cinematic biography. There was a turn from comedy to a more profound drama and a new quality humor with the release of this film. The film won four Academy Awards and many others. Diane Keaton, who played the lead role, was nominated as the Best Actress. The film Annie Hall took the 35th place on the list of 100 greatest American films by the American Film Academy. And it was the fourth on the list of "100 Funniest Movies". Critics believe that this is the best Woody Allen’s movie. It was a real breakthrough in the career of the director and the movie was nominated for four Oscar Awards.

We can trace Allen’s brand directorial style in his films. It is an intelligent comedy with elements of a psychological drama, absurdity, and satire. No one had shot such films before.

Since the 1990’s, Allen rarely played as an actor. In the 2000’s he finished with acting and focused on writing scripts and directing. In the second half of the 2000’s, Woody shot films that the critics conventionally called “European trilogy”. The movies show events in the major cities of Europe. Match Point was filmed in Britain. The director considers it his best work. Later he shot Vicky Cristina Barcelona, To Rome with love, Midnight in Paris. The last movie with Owen Wilson in the lead role got $ 150 million and was awarded four Oscars and Golden Globe.

In the summer of 2013, Woody Allen’s film Blue Jasmine was shown on the screen. Critics wrote many laudatory reviews about the movie. Next year the Hollywood Foreign Press Association awarded Allen the Cecil B. DeMille Award.

Woody is known not only for his films and scripts of stage plays. He has written many books, published several collections of stage plays and stories. He is a big fan of jazz music. Allen himself plays well the clarinet and saxophone. He often performs in clubs and at famous concert venues. In the autumn of 2008, Woody Allen first staged opera Gianni Schicchi. It debuted in Los Angeles. Critics acknowledged the opera as the most significant event of 2008.

Producer’s first wife was Harlene Rosen. The young people met at a jazz concert. The couple married in 1956 in Hollywood and moved to New York, where Harlene took classes in philosophy, and Woody wrote humorous sketches and scenarios. The marriage lasted for 5 years and broke up. After the divorce, Rosen repeatedly pleaded with her ex-husband because of his caustic remarks about her, estimating the harm in a million dollars.

Woody Allen’s second marriage with actress Louise Lasser lasted even less. The couple broke up 3 years later, but Louise managed to act in several films of her husband, the most successful of which is Take the Money and Run and Everything You Always Wanted to Know About Sex* (*But Were Afraid to Ask).

In 1997 Woody Allen married again. His freedom lasted for 8 years but ended when he met Diane Keaton. The actress had a considerable influence on the work of the director and played in many his movies, the most famous one is Annie Hall. By the way, the title of the movie is the real name of the actress. There are many episodes from the marriage life of the star couple in the film. This marriage broke up, but Allen and Keaton are still friends and continues to communicate and collaborate.

In 1980, Woody Allen had a love affair with Mia Farrow. The actress played in his 13 films, the most popular movies are The Purple Rose of Cairo and Hannah and her Sisters. The couple lived for 12 years without registering their relationship. Mia gave birth to Allen’s one and only son Ronan Satchel Farrow. They also adopted two children, Malone and Mike. The divorce of the couple was accompanied by huge scandal and multiple lawsuits. Ex-wife accused Woody of child molestation, but the evidence was not proved.

The real reason for the broke up was Allen’s affair with Mia’s stepdaughter Soon-Yi Previn. She was an adopted daughter of Farrow and her ex-husband André Previn. In the late 1990’s Woody Allen and Soon-Yi Previn got married. Now they are bringing up two adopted children, Bechet and Manzie.

The only son of Allen and Farrow, Ronan Satchel Farrow was included in Forbes magazine's "30 Under 30" Most Influential People. He was Secretary of State Hillary Clinton's Special Adviser for Global Youth Issues and got a Rhodes Scholarship, which allowed him to study at the University of Oxford. 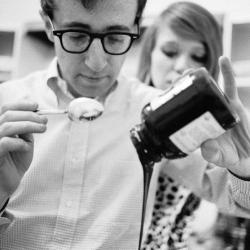