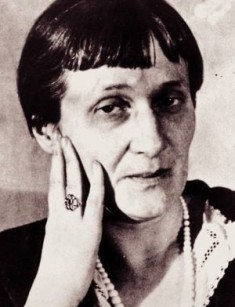 Anna Gorenko, known to her admirers as Akhmatova is one of the brightest and most talented poets of the Silver Age. She lived a long and full of tragic events life. This proud and at the same time fragile woman witnessed two revolutions and two world wars. Her heart was wounded by repressions and death of friends and relatives. Anna Akhmatova's biography is worthy of a novel or film adaptation. A lot of her contemporaries and playwrights, directors and writers of our time tried to do this.

Anna Gorenko was born in the summer of 1889. Her father, Andrei Andreevich Gorenko, was a hereditary nobleman and retired naval engineer-mechanic. Her mother, Inna Erazmovna Stogova, belonged to the creative elite of Odessa. The girl was born in the southern part of the city, in a house at Bolshoy Fontan Street. She was the third of six children.

When the girl was one year old, the parents moved to St. Petersburg, where the head of the family received the rank of collegiate assessor and became an official of the State Control for special assignments. The family lived in Tsarskoye Selo. All childhood memories of Akhmatova were connected with this place. Anna and her nanny often went to Tsarskoye Selo Park and other places still remembered by Alexander Pushkin. Children were taught etiquette. Anna learned how to read with the help of the ABC by Leo Tolstoy. She learned to speak French in early childhood, listening to the teacher who taught elder children.

The future poet graduated from the Mariinsky Women's Gymnasium. Anna Akhmatova started writing poetry, according to her, at the age of 11. It is noteworthy, that she started studying poetry not with the works of Alexander Pushkin and Mikhail Lermontov but with the ode of Gavrila Derzhavin and the poem "Moroz, Krasny nos" by Nikolay Nekrasov, recited by her mother.

Young Gorenko fell in love with Petersburg once and forever and considered it the city of her life. She missed the streets, parks and the Neva river, when she had to move with her mother to Evpatoria, and then to Kiev. Her parents divorced when the girl was 16 years old.

The junior year she studied at home, in Evpatoria. And the last grade she finished at the Fundukleevsky gymnasium in Kiev. After that, Gorenko chose a law faculty. She was interested in Latin and history of law but jurisprudence seemed boring to her. So the girl continued her education in St. Petersburg, at the Classes for women (Zhenskie Kursy) of N. P. Raev.

In Gorenko's family, no one was interested in poetry: "there are so many eyes around". Only her distant relative Anna Bunina on her mother’s side was an interpreter and poet. Her father did not approve the hobby of his daughter and asked not to disgrace his name. Therefore, Anna Akhmatova never used her real name in poems. Anna made up a pseudonym 'Akhmatova'. In her genealogical tree, she found her great-grandmother who was connected to the Tatar Khan Akhmat.

In her youth, when she studied at the Mariinsky Gymnasium, she met a talented young man Nikolay Gumilyov. Later he became a famous poet. Living in Evpatoria and in Kiev, the girl sent letters to him. In the spring of 1910, they got married in the St. Nicholas Church, which is situated in Nikolskaya Slobodka near Kiev. At that time, Gumilyov was a well-known poet. The newlyweds went to Paris for their honeymoon. Akhmatova came to Europe for the first time. When they returned, her husband introduced his talented wife to the literary circles of St. Petersburg, and she was immediately noticed. At first, everyone was struck by her unusual majestic beauty. People liked the dark-skinned woman with a crooked nose.

Soon St. Petersburg writers recognized the talent of this beautiful woman. Anna Akhmatova wrote poems about love in times of crisis of symbolism. Young poets wrote in such fashionable styles as futurism and acmeist poetry. Gumilyova-Akhmatova became famous as an acmeist poet.

1912 becomes the year of a breakthrough in her biography. In this memorable year, not only her only son, Lev Gumilyov, was born, but also the book of verse Evening (Vecher) was published. The first creation of Akhmatova brought her fame. This woman lived and wrote her poems in a very hard time.

2 years later, the second collection “The Rosary” (or Beads – Chetki) was published. It was successful. The collection received positive reviews from critics and admirers. The woman became the most fashionable poet of her time. Akhmatova no longer needed her husband's patronage. Her name sounded even louder than the name of Gumilyov.

In the revolutionary 1917, Anna released her third book “Belaya Staya” (White Flock). About 2,000 copies were printed.

The couple broke up in 1918.And in the summer of 1921, Nikolai Gumilyov was shot dead. Akhmatova couldn’t accept the death of her son's father and the man who introduced her to the world of poetry.

Since the mid-1920's there was a difficult time for the poet. She was under the close attention of the NKVD. Her books were not published. Akhmatova wrote her poems and didn’t show it to anyone. Many of them were lost. The last collection was published in 1924. Her poems were called "Provocative" and "anti-communist".

Her next works were closely connected with her concern for friends and relatives. Most of all she was worried about her son. In the late autumn of 1935, the first alarm bell sounded: at the same time her second husband Nikolay Punin and the son were arrested. They were released few days later but the woman didn’t feel safe anymore.

3 years later her son was arrested. He was sentenced to 5 years in prison camp. In the same terrible year, Anna Andreevna and Nikolay Punin broke up. The exhausted mother visited her son in Kresty. In those years, the famous "Requiem" by Anna Akhmatova was released.

To release her son from the camp, the poet published her collection “From six books” in 1940. There were old censored poems as well as new ones, "corrected" according to the ruling ideology.

Anna Andreevna spent the Great Patriotic War in Tashkent. Immediately after the victory, she returned to destroyed Leningrad. From there she soon moved to Moscow.

Her son was released.But in 1946, her poems were criticized at a regular meeting of the Writers' Union, and in 1949 Lev Gumilyov was arrested again. This time he was sentenced to 10 years. This situation broke woman’s heart. She wrote petitions and letters to the Politburo, but no one wanted to listen to her.

After the release of her son, the relationship between them for many years remained strained: Lev believed that his mother loved poetry more than him.

The life of this famous but unhappy woman got better only when she was old. In 1951 she was readmitted to the Union of Writers. Akhmatova's poems were printed. In the mid-1960s Anna Andreevna received a prestigious Italian award and her new collection Beg vremeni (The flight of time) was released. The famous poet got a Ph.D. degree at Oxford University.

At the end of her life, the world-famous writer finally got her own house. Leningrad "Litfond" gave her a small wooden house in Komarovo. It was a tiny house, which had a veranda, a corridor and one room.

The only furniture was a bed, a table made of a door, Modigliani's picture on the wall and an old icon that once belonged to the first husband.

Men were impressed by this woman. In youth, Anna was very flexible. Some people say that she could easily touch the floor with her head. Even the Mariinsky ballerinas were amazed. And she also had amazing eyes that changed color. Some said that Akhmatova's eyes were gray; others claimed that they were green, and others told that they were sky-blue. Nikolay Gumilyov fell in love with Anna Gorenko at first sight. But the girl loved Vladimir Golenishchev-Kutuzov, a student who did not pay any attention to her. The young girl suffered and even tried to commit suicide.

It seems that the daughter inherited her mother's bad luck. Her 3 marriages did not bring happiness. Men betrayed her and she betrayed them. The first husband loved Anna all his life, but at the same time he had an illegitimate child and everyone knew this fact. Besides, Nikolay Gumilyov did not understand why his beloved wife, not a genius poet at all, in his opinion, caused such an excitement among the youth. Anna Akhmatova's poems about love seemed to him too long and pompous.

And finally, they broke up. After the divorce, a lot of men wanted to be with Anna Andreevna. Graf Valentin Zubov bought her a lot of expensive roses, but she preferred to be with Nikolaĭ Nedobrovo. However, soon he was replaced by Boris Anrep.

The second marriage with Vladimir Shileyko exhausted Anna so much that she told: "Divorce ... What a pleasant feeling!"

A year after the death of her first husband, she broke up with the second. And in half a year she married for the third time. Nikolay Punin was an art critic. But Anna Akhmatova was not happy with him.

He sheltered the homeless Akhmatova after the divorce but did not make her happy. His new wife lived with his ex-wife and his daughter, giving money for food. Her son Lev, who lived with his grandmother and visited his mother, slept in a cold hall and felt like an orphan.

The personal life of Anna Akhmatova should have changed. She was going to marry the pathologist Garshin. The wedding was canceled because his dead mother told him in a dream not to marry the witch.

Anna Akhmatova died on March 5, 1966 at the age of 76. It shocked everyone. Although, she was sick for a long time. The poet died in a sanatorium in Domodedovo. The day before her death, she asked to bring her the New Testament. She wanted to compare it with the texts of the Qumran Caves Scrolls.

Akhmatova's body was transferred from Moscow to Leningrad: the authorities did not want dissident riots. She’s buried at Komarovo Cemetery. Before her death, Akhmatova had not very good relations with her son. They did not communicate for several years.

Lev Gumilyov laid a stone wall with a window at the grave of his mother, which was supposed to symbolize the wall in Kresty, where she visited him.

Firstly, there was a wooden cross, as Anna Andreevna asked. But in 1969 a cross appeared.

The Anna Akhmatova Museum is located in St. Petersburg on Avtovskaya Street as well as in the Fountain House, where she lived for 30 years. Later, museums, commemorative plaques appeared in Moscow, Tashkent, Kiev, Odessa and many other cities where the famous woman lived. 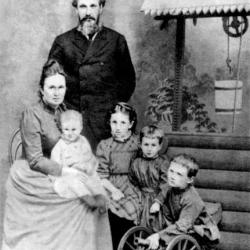