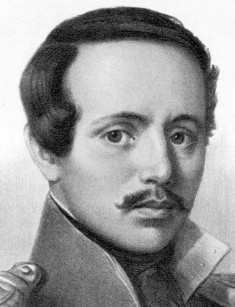 Comparing the number of books of Mikhail Lermontov with the number of lived years, it becomes clear that he was a genius. At 10 he composed plays for the home theater, read French, German and English classics in the original, painted beautifully. He wrote the first edition of the poem "Demon" at 15, the drama "Masquerade" at 20, the novel "Hero of Our Time" at 24. And at 26 years Lermontov died.

Mikhail Lermontov was born on October 15, 1814 in Moscow. The grandmother of the poet Elizaveta Arsenyeva is a noblewoman from the Stolypin noble family. The minister Peter Stolypin is the poet's second cousin.

Powerful and rich Elizabeth Arsenyeva did not want her single daughter to marry Yuri Lermontov, a handsome military man of impoverished family. His doubtful origin from the Scotsman George Lermont did not inspire her confidence. Later, the British company Oxford Ancestors denied the relationship of the poet with Lermonts by DNA analysis, confirming Arsenyeva's doubts.

As the woman predicted, the personal life of her daughter Masha, who married Yuri Lermontov at the age of 16, was unhappy. The husband betrayed the young wife almost immediately after the wedding. He began relations with a German nanny of his son Misha, liked the courtyard girls. And when his wife accused her husband of adultery, she was beaten. 21-year-old Maria Arsenyeva-Lermontova died from consumption, leaving half-orphaned 2-year-old Misha.

Elizaveta Alekseevna, who at the time of her daughter's death was 44 years old, took her grandson from her son-in-law, having issued Lermontov a bill for 25 thousand rubles. Yuri left the family estate of the Stolypins, and Misha was brought up by his grandmother. The woman loved her grandson and paid a lot of money for his education and health. Mikhail Lermontov grew up a sick boy, and his grandmother hired for her grandson a French doctor Anselm Levy.

The mother-in-law occasionally allowed the father to meet his son, but both suffered after such meetings.

Childhood and youth of the future classicist were spent in Tarkhany estate in Penza province. Elizaveta Alekseevna hired teachers for his education. The former officer of the Napoleon army, a Frenchman Capet, taught the boy French. After the death of the teacher, his place was taken by the emigrant Shandro, whom Mikhail Lermontov later described in the poem "Sashka", calling him the Marquis de Tess and the "Parisian Adonis". Shandro was replaced by the Englishman Windson, who tought the young man English literature. Lermontov loved Byron's books thanks to his British teacher.

Mikhail Lermontov grew up in the family estate watching the village life, listening to the peasants' folk songs and legends about Stepan Razin and Emelian Pugachev.

A deep trace in the life and creative biography was left by the trip with his grandmother to the Caucasus. In Goryachevodsk a 10-year-old boy fell in love for the first time and 2 years later he devoted the poem "To Genius" to his first girlfriend.

In September 1828, Mikhail Lermontov was enrolled in the fourth class of a boarding school in the capital. In December, the boy went to the fifth grade, and got the picture and the book for diligence. This year was significant for Lermontov because it was the beginning of his creative biography.

At boarding school, the teenager created hand-written journals. In one of them, "Morning Dawn", the young poet became the main employee and placed here his first poem "Indian". But two years after the transformation of the boarding school into a gymnasium, Misha left the school.

16-year-old Mikhail Lermontov spent summer in the village, in the Stolypnykh Serednikovo estate. Nearby, his relatives Vereshchagins lived. Lermontov was friends with Alexandra Vereshchagina. The girl introduced Michael to her friend, "black-eyed beauty" Catherine Sushkova with whom the young man fell in love. But she didn’t answer Lermontov’s feelings. He suffered very much. Katya laughed at the clumsy and unimpressive boy. Later, Sushkova realized that she made a fatal mistake, making fun of the unhappy young man.

In autumn of 1830, Mikhail Lermontov entered the Moscow University, choosing a moral and political faculty. Two years he studied with Vissarion Belinsky, Alexander Herzen and Nikolai Ogarev. In his student years, Lermontov wrote his drama "Strange Man", in which he criticized serfdom. Mikhail showed a daring temper and discourtesy. Because of his character teacher didn’t like him and Mikhail didn’t pass exams.

Lermontov refused to study one more year and left the university, having moved with his grandmother to St. Petersburg. The attempt to enter the second course was not successful: Mikhail was offered to start from the beginning. Following the advice of friends and grandmother, the young man entered the school of guard ensigns and cavalry cadets, where he studied for two years, calling them "terrible" because of military drill.

In St. Petersburg, clumsy and gloomy Mikhail Lermontov changed: the young man became the heart of the company; he was dating beautiful women. Sharp mind, erudition, sarcasm was noted by friends and high society ladies.

In 1835, the poet's works first appeared in print. Lermontov’s friends, without his knowledge, published the novel "Hadji Abrek".

From the second half of 30s Mikhail Lermontov's poems were published. Critics and readers warmly received the poem "Song of Tsar Ivan Vasilyevich ..." In the poems "Dagger" ("My Iron Friend"), "Poet" and "Duma" Lermontov proclaimed the ideals of civic poetry. The national topic and the Russian character were described in the poems "Borodino" and "Homeland".

A vivid example of romanticism is the poem "Parus", first published in “Otechestvennye zapiski”. Reading the lines, the spiritual impulses of the 18-year-old poet become clear.

In St. Petersburg, Mikhail Lermontov was watching the aristocracy. It was the basis of the drama "Masquerade," which the poet repeatedly rewrote, but never broke the wall of censorship.

A turning point of Lermontov's early biography to adult art happened in 1837, after the publication of an angry response to the death of Alexander Pushkin. The poem "The Death of a Poet", criticizing the murderer and nobility, named by Lermontov the culprit of the tragedy, was read by the whole Russia. Pushkin's friends and admirers of his talent met the poem warmly, and the enemies, including secular ladies who supported handsome Dantes, were angry.

After negative reaction of people, Mikhail Lermontov added sharpness. The first poem ended with a line: "And on his lips is the seal." The continuation to "arrogant descendants": people saw a call to the revolution.

After the poem appeared, there was a trial and then arrest. The process was observed by Emperor Nicholas I. Lermontov’s grandmother and friends of Pushkin, including Vasyl Andreyevich Zhukovsky, tried to help Mikhail Lermontov. The man was exiled to the Caucasus as a lieutenant in the dragoon regiment.

The first exile lasted six months, but Lermontov strongly changed. The picturesque nature of the Caucasus, the life of the mountain men, local folklore were reflected in his works of "Caucasian" period. But the youthful excitement of the poet melted, giving way to "black melancholy."

After returning to St. Petersburg, Mikhail Lermontov was in the center of attention: some loved him and others hate him. The Caucasus inspired the poet to write poems that were started in Moscow: “Demon” and “Mtsyri” appeared.

After the exile Mikhail Lermontov brought to St. Petersburg his new works, which were printed in every issue of the “Otechestvennye zapiski” journal. Mikhail Yuryevich spent time with Pushkin’s close friends and was at the peak of popularity. He was still daring and sarcastic. The quarrel with the son of the French ambassador Ernest de Barant in February 1840 ended with a duel. Lermontov and de Barant decided to meet at the Black River, not far from the place of Pushkin's duel with Dantes. Ernest de Barant missed, and Mikhail Lermontov shot to the other side.

The authorities recognized the duel; the poet was arrested and was sent to the military court. The emperor ordered to send a duelist to the Caucasus for the second time, but now to the army regiment, who fought on the front line. Lermontov showed bravery, but because of Nicholas I, he did not receive any awards.

One of the last poems of the poet - "Alone for the road" - appeared at the end of May 1841. Critics saw in it the "lyrical outcome of the searches", to which Mikhail Lermontov addressed at the end of life. Few weeks before the murder, the poet wrote a poem "Cliff", printed two years after his death.

In St. Petersburg Mikhail Lermontov created the novel "Vadim", in which he described the events of the Pugachev rebellion.

But the apotheosis of Lermontov's realism is the novel "The Hero of Our Time", written in 1840, shortly before his death. The image of Pechorin is shown on a contrasting background of the life of Russian society. The contradiction between deep character of Pechorin and the meaningless of actions is autobiographical. Innovation of the novel is in deep psychology and the inner world of heroes. None of the Russia writers did this before.

The novel was approved by Nikolai Gogol, Leo Tolstoy and Anton Chekhov.

The poet, according to the description of a contemporary young lady, wasn’t beautiful. He was small, stumpy, his eyes were dark, his smile was unpleasant, he was a nervous young man, like a spoiled and angry child.

Lermontov's three main loves got married: Ekaterina Sushkova with whom Michail fell in love at the age of 16, Natalia Ivanova, to whom he dedicated the “Ivanovski Cycle”, Varvara Lopukhina, whom the poet loved until the end of his life.

Mikhail Lermontov cruelly avenged Sushkova 5 years later. Learning that the girl was going to get married, he destroyed the wedding, playing passion and Catherine fell in love with him. The bride, compromised in the eyes of the world, suffered for a long time. The history of tragic relations resembles the love line of the novel "The Hero of Our Time".

The news about the marriage of Varenka Lopukhina upset the poet. When Varvara got married, Lermontov never called her by her husband's surname - Bakhmeteva: his beloved remained Lopukhina for him.

Winter of 1840-41 was the last for Lermontov. He came on vacation to St. Petersburg, dreaming of retirement and literary work. His grandmother, who dreamed of a military career for her grandson and did not like his hobby, forced Mikhail not to resign. To the Caucasus, Lermontov returned with an uneasy heart.

In Pyatigorsk there was a fatal quarrel between Mikhail Lermontov and the retired major Nikolai Martynov, whom he met in Moscow and even visited his parents' house. Later Martynov said that in Pyatigorsk Lermontov did not miss a single chance to quarrel with him.

The duel took place on July 27, 1841. The opponents agreed to shoot "till the end." Mikhail Lermontov shot up, and Martynov - straight, into the enemy's chest, killing him. The storm and heavy rain that broke out prevented the arrival of the doctor, and the dead poet was lying on the ground for a long time.

Lermontov was buried on July 29, 1841 in the old cemetery in Pyatigorsk. But in 250 days the grandmother of Mikhail Yuryevich asked the permission of the emperor to transport the body to Tarkhany.

In April 1842, the body in a coffin was buried in the family chapel-tomb, next to his grandfather and mother.

Lermontov's books were reprinted dozens of times. The last one was in 2014: a collection of works in 4 books was published by the Publishing House of the Pushkin House in the number of 300 copies.

Streets, public gardens, libraries in Russia and the post-Soviet republics have the name of Mikhail Yuryevich. In Odessa, the city's library No. 16 and the clinical sanatorium are named after the poet.

Monument to Mikhail Yurievich Lermontov stands in Grozny on Mohammed Ali Avenue, next to the Lermontov Drama Theater. On the pedestal there are poet's words:

"As a sweet song of my Motherland, I love the Caucasus!" 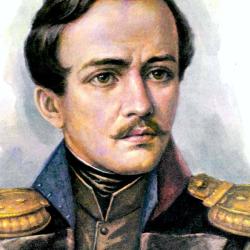