Goldie Hawn, in her nature, is a unique personality whose biography can be studied during the long hours. She is a responsible mother, a loving spouse and an excellent actress as well. These are the qualities which create the basis of the person, who has dedicated all her life to her favorite occupation.

Goldie’s acting career wasn't easy as the girl has faced many obstacles and difficulties. Her family and confidence in her forces have helped her to cope with it.

Hawn was born in the creative family. Her father was a great musician, and her mother was a professional dancer. Goldie couldn't but inherit love for the creativity from her parents, and since childhood, the girl has comprehended the dancing skills.

At the age of five, little Goldie for the first time performed in front of the audience. She appeared on the stage with the ballet performance. The audience has met her warmly. Some years later the girl became a regular visitor at the holidays and took part in different dancing and theatrical performances. But the creative person had achieved the peak of the popularity in 1961 when she appeared on the big stage as one of the leading characters of the play Romeo and Juliet.

At the age of sixteen, Goldie moved to New York where she entered the local university on the faculty of dramatic arts. However, she wasn't successful in her studies. She frequently skipped the lessons because she had to give lessons in her dancing studio and this resulted in the fact that Ms. Hawn was dropped out of the educational institution. After this failure in the studies she has entirely concentrated on the art, and this has given corresponding results.

Goldie has become an actress quite suddenly, and it has been unexpected for her. During one of the dancing performances, the famous agent noticed her and recognized the real talent in her. Having noticed excellent acting skills at the beginning actress the man at once invited her to cinematography. Since then the dancer has started a different but not less fascinating career on the screens.

The spectators were enchanted by her attractive appearance (bright blue eyes and a constant smile on her lips). That's why nobody had doubts about the success of the first actress's works. The TV series Good Morning, World and the musical The One and Only, Genuine, Original Family Band have been appreciated by the critics and have been warmly met by the audience. Goldie herself hasn't noticed how she has become famous.

Goldie Hawn had her golden opportunity when she enriched her filmography with the masterpiece under the title Cactus Flower. Right after the shootings in this picture during the period from 1969 till 1975 she got the most prestigious Academic Awards and Golden Globe Awards. These pictures are still considered the most significant works in her filmography. Indeed, after the movie Cactus Flower, Goldie was nominated for many awards, but Cactus Flower has become the best of her works. The actress is proud of this work till present days.

In the period of late seventies Hawn appeared in such pictures as Private Benjamin, Butterflies Are Free, Foul Play and Bird on a Wire with the participation of Mel Gibson as Goldie's partner. After numerous successful works, the directors began to invite Goldie to take part in their movies. But for the actress, her family was in the first place, and she has always dreamed more to become a happy mother than a Hollywood star. However, in her family life, the actress faced many challenges and failures which resulted in the fact that her career has slowdown.

By the words of Goldie, the acquaintance with the famous actor Kurt Russell became the happiest meeting in her life. The lovers have lived happily together for many years, but they still haven't registered their relations officially. But before this, some significant events had happened in the life of the actress and had greatly influenced her emotional state.

In 1975 when Goldie's career began to take off, she met her future husband – the actor Gus Trikonis. It was Gus who became the first man who broke the girl's heart. Moreover, he sued his ex-wife to pay him a solid sum of $75,000 what was a huge sum at that time.

After the divorce, the girl has met her second husband who was also an actor and not a reliable person as well as the previous one. Goldie Hawn and Bill Hudson have had two charming children in their marriage. Bill has filed for the divorce after the short time (they have been married for four years only), and again the court wasn’t favorable to Goldie. Mr. Hudson has taken away the luxurious mansion in Malibu from his ex-wife. After that, the unfortunate woman left practically without anything, with two children and hatred in her heart to all men. The pain in her soul has slipped away with time. At present, the actress thinks that her dream has come true.

It's amazing, but Goldie and Kurt met each other in 1968 during the shootings of The One, and Only, Genuine, Original Family Band and the young actors even didn't imagine that in future they would be passionately in love with each other. The colleagues were humbly looking at each other, and their relations didn't go beyond the polite greetings. It seems that the destiny has happened in such a way that both lovers have endured some unfortunate experience which later allows them to appreciate the purest feeling in our world.

The major part of the journalists tried to predict and anticipate the engagement of Russell and Hawn, but the couple didn't decide to register their relationship officially. Kurt was worried about the subject whether the children of his beloved woman would appreciate their union. As Hollywood is full of unreliable families, and the official marriage gives a possibility to protect the couple from the soonest parting.

The lovers were very severe and careful in their decision to live together, but it seemed reasonable for both of them. Kurt and Hawn admitted in the numerous interviews that it wasn't always necessary to sign the marriage papers but to love the person truly.

"As for me, the official marriage is like a locked cage from which I can't fly away. In our relationship with Kurt, everything is different, and it is the opened door of this cage which gives me confidence that everything is true between us", - says the happy actress.

Though the girl took a long break in the sphere of the movie industry, she still appears in different magazines in which her family life is presented in all details. For long years spent together with Kurt, Goldie has managed to cope with the past mental traumas and at present enjoys her family comfort.

The actor’s children (including the famous actress Kate Hudson) have grown up and have presented grandchildren to their parents. Though, the two lovers haven't decided to get married. Mr. Russell was even joking for a long time that their children would mature and create their own families and Goldie and Russell won't register their relations. That's what happened, as the formalities don’t matter when two persons are deeply in love.

"I’m extremely happy when I wake up and see him close to me", - Goldie says.

"We take the public orders with prejudice. I'm not used to respecting different stereotypes, but I respect her so is it bad?", - Kurt answers with confidence.

Indeed, there are some individual cases when in the world of modern cinematography, especially Hollywood, we can see such strong and faithful relations. And, as it can be noted, the official documents not always help to create a really strong relationship. 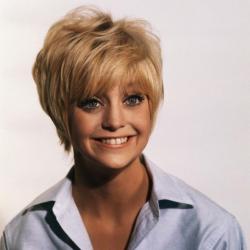