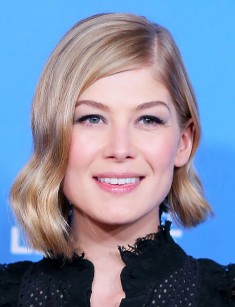 Rosamund Pike is an English actress. Viewers have known Pike for her roles in the films The Libertine, Barney’s Version, Promised Land, Pride & Prejudice and the film Die Another Day in the series about James Bond. The actress’s filmography did not have even 30 movies, and it was difficult to call Pike popular and well-known.

But in 2014 the actress made a breakthrough in her acting career and achieved more significant results. Rosamund Pike played a title role in the detective thriller Gone Girl, which became a blockbuster not only in American but also in the whole world.

Rosamund Pike was born in the English capital of London. The parents of the future actress, Julian, and Caroline Pike were well-known opera singers. The girl's father was also a professor and head of operatic studies at the Birmingham Conservatoire.

By the age of 7, Rosamund traveled with her parents across Europe. Then she attended an independent school for girls in Bristol, where she studied not only general subjects but also music and learned to play the cello.

Rosamund studied English literature at Wadham College, Oxford. At the same time, she began to take part in the productions of the National Youth Theater. Rosamund Pike played in such productions as Romeo and Juliet, The Taming of the Shrew, The Libertine and All My Sons, and together with the troupe toured across Europe and Asia.

Later, she studied at Oxford University and participated in plays Rhinoceros and Skylight by the famous theater director, James Rogan. Having received a bachelor's degree in 2001, Rosamund Pike decided to pursue an acting career.

In 1998, while studying at college, Rosamund made her debut in the television movie A Rather English Marriage, where she played the bit part of Celia. A year later, the actress filmed in the four-part television series Wives and Daughters, a film adaptation of the famous classic novel by Elizabeth Gaskell, for nine months. The audience warmly received the television film, and critics highly appreciated Rosamund’s acting.

After graduation from the university, the young actress continued to shoot in the series. Such series as Love in a Cold Climate and Foyle's War, where Pike played bit parts, was released.

In 2002 she appeared on the big screen. The actress played in one of the films of Bond series entitled Die Another Day. Two years later, Rosamund played a leading role in the Franco-Israeli drama film Promised Land. Then, there was the drama The Libertine, the science fiction thriller Doom, the screen version of Jane Austen's classic novel Pride & Prejudice, the thriller Fracture and the drama Fugitive Pieces. Rosamund Pike performed minor roles in all these movies.

Critics appreciated her acting, viewers liked her, but she did not receive significant roles in the subsequent films, although they were mostly top-grossing. The movies with her participation are the Oscar-winning drama An Education, the fantastic action film Surrogates, the historical comedy Made in Dagenham, the comedy-drama film Barney's Version, the parody comedy Johnny English Reborn and the comedy The Big Year.

Only in 2010, Rosamund Pike got again a leading female role in the adventure film Wrath of the Titans, which is based on ancient Greek mythology. The actress played the daughter of the Ethiopian king, Andromeda. Two years later, the action movie Jack Reacher was released, and Rosamund played in a duet with Tom Cruise.

In the film, the actress wore see-through underwear. Subsequently, Rosamund Pike has repeatedly proved that she felt comfortable with her body. The actress appeared topless in movies, she played in sex scenes, and more than once participated in photoshoots for Playboy magazine being in underwear and completely naked.

The work, which brought the long-awaited fame, was the leading female role of Amy Elliott Dunne, the wife of protagonist Nick, in the detective thriller Gone Girl. The film was released in 2014 and critics named it "a perfect adaptation."

At the same time, some critics gave negative reviews about the social meaning of the film. According to statistics, in the USA there are more women who have experienced domestic and sexual violence than men whose wives tried to frame them. Gone Girl was not the first film about wrongful convictions.

Human rights defenders and social workers are concerned that the huge success of the film will increase the level of mistrust towards the real victims of violence.

In 2014, the actress played a leading female role in more positive and light adaptation. Rosamund portrayed Clare in the comedy Hector and the Search for Happiness. The film is based on the novel by François Lelord and tells about a London psychiatrist who cannot help his clients become happier with traditional medicine and psychoanalysis methods, so he goes around the world in search of happiness. Simon Pegg played a leading role in the film.

In 2015, Rosamund Pike appeared in the leading role in the thriller Return to Sender. The actress played the victim of violence again. This time she portrayed a nurse, suffered from the cruel maniac. The girl manages to survive, get to the police and achieve justice. But even when the madman goes to jail, the traumatized girl cannot stop thinking about revenge.

Since 1997, Rosamund Pike dated actor Simon Woods. Their relationship lasted six years. Then she had a love affair with artist Henry John for about a year.

The actress met director Joe Wright on the set of the movie Pride & Prejudice. They dated since 2004, and in 2007 they even announced an engagement, but soon broke up.

In late 2009, Rosamund became engaged to cameraman Robie Uniacke. The couple does not plan to marry. Nevertheless, they have two sons with unusual names. In 2012, Solo was born, and 2 and a half years later, she gave birth to his younger brother Atom.

Rosamund Pike is fluent in not only native English but also German and French.

The actress does not have an official Instagram page, but there are her photos on fan pages from different regions. There are pages of German fans, two British pages, smaller accounts of fans from other countries. Fan pages attract the attention of thousands of fans, and every page has about 60 000 subscribers.

In September 2016, the American biographical drama film A United Kingdom directed by Amma Asante with Rosamund Pike and David Oyelowo in the leading roles premiered at Toronto Film Festival. According to the film's slogan, the movie tells about the real events that "shocked the Empire." The action took place in 1948.

The Prince of Bechuanaland (nowadays the territory is called Botswana), Seretse Khama, studies in London and falls in love with British Ruth Williams. The girl likes him too, but this is not the end of their problems. Both the families of young people and the South African and British governments condemn and disapprove these inter-class and interracial relationships.

In 2017, Rosamund Pike will appear in the role of Lina Heydrich in the French film The Man with the Iron Heart. 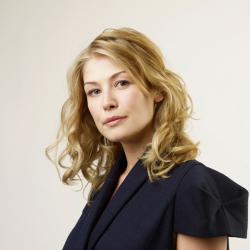