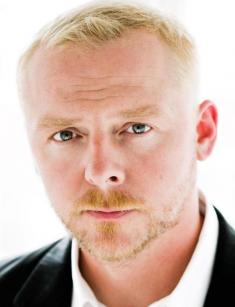 Simon Pegg is a British actor, comedian, scriptwriter, and writer famous beyond his country. Although he had to face many ordeals, the artist managed to overcome them and find his place.

The would-be actor was born on February 14, 1970, into a family of a civil servant and a jazz musician. The boy was named Simon John Beckingham. The father had to work part-time as a salesperson in a musical instrument store. Eventually, the parents’ relationship deteriorated, and they divorced; Simon was seven. Soon, the mother married again, and her son got the new husband’s second name.

Simon changed many schools and then entered a college to study English Literature. At that period, the young man took an interest in cinematography and theater. Besides, the father’s genes manifested themselves: Pegg liked music and became a drummer in a rock band. However, the desire to make people laugh turned out to be stronger than music performances.

After graduation, Simon enrolled at the University of Bristol, School of Drama. He worked as a salesman at a men’s section in a clothing store to earn his living. As a student, Simon Pegg regularly participated in contests and theater plays. The beginning artist loved parodies: he felt more confident as he was portraying comic figures.

The actor invented his own technique of how to present the material: it was based on the paradox and nonsense principles. A goldfish became the main character of Simon’s acts; he interacted with the audience on its behalf.

In 1991, Pegg graduated from the university. The young man spent two years in Bristol and then moved to London. This is where the star period of his career began.

In 1995, Simon started his TV career in the show Six Pairs of Pants. Soon, he appeared in Faith in the Future, Hippies, and other programs. The young man met Edgar Wright at some show; it was the turning point in his life.

In 1999, Simon Pegg worked as a co-writer for the sitcom Spaced and received a nomination for BAFTA TV Situation Comedy Award; besides, he played Tim Bisley there. The man joined the project thanks to Edgar Wright’s support. The series is still popular today. Moreover, Pegg wrote scripts for 20 other movies including Asylum, Big Train, and Free Jimmy. He often took parts in episodes: Band of Brothers, Look Around You, and so on.

Five years later, Simon appeared in the comedy Shaun of the Dead; he also wrote the script together with Wright. After the project was finished, the actor confessed it was pleasant for him to play Shaun: they were similar. 2005 brought the role of an editor in the popular sci-fi series Doctor Who. The artist tried new stage types and had an episodic part of a zombie in George Romero’s horror Land of the Dead: his character was chained to a wall, and any visitor of an amusement center could take a picture with him.

In 2006, Simon Pegg was offered the role of the main character’s assistant in Mission: Impossible III starring Tom Cruise. In addition, Wright and Pegg finished Hot Fuzz. The next three years were marked with small roles, although the actor had a steady flow of invitations, two or three projects annually. He gained the lead role in Paul and created the script for it; his character traveled across the United States accompanied by aliens.

In summer 2013, the movie The World's End came out; it was the last part of the Three Flavors Cornetto trilogy. Simon brilliantly personified a former drug user Gary King who wanted to gather his friends and have a large alcoholic marathon in the city bars.

The next large work, the space opera Star Wars: The Force Awakens, was released in 2015. Simon Pegg played the secondary character Unkar Plutt. It was the seventh episode of the popular franchise. The actors who had appeared in the previous movies participated there: Mark Hamill, Carrie Fisher, and Harrison Ford. The Force Awakens became one of the record-breakers: it grossed $2 billion throughout the first year. Only Avatar and Titanic surpassed it.

Overall, Simon Pegg has participated in more than 80 works; he is not going to slow down.

Simon Pegg prefers to keep his personal life secret. He is married to Maureen Pegg; the wedding took place on July 23, 2005, in Glasgow. The actor Nick Frost became Simon’s best man; they had collaborated in several projects before.

Simon’s fans mark his resemblance to another actor, Michael Sheen. The men’s height is almost the same; Pegg is only 1.18 inches higher than Sheen: 5.84 ft. (178 cm.).

2017 brought Simon Pegg the next episode of the popular franchise, Star Wars: The Last Jedi, where the actor personified Unkar Plutt again. In 2018, the thriller Terminal came out; the artist got the role of Bill. Besides, Pegg appeared in Steven Spielberg’s Ready Player One about the future where people find the meaning of their lives in the online world of the game Oasis.