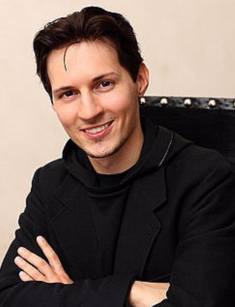 Pavel Valeryevich Durov is a young Russian businessman, the founder of the social networking site VK. The network is very popular. For many people, it changed their understanding of the Internet. Pavel Durov was not only the owner of the Vk Company but also took part in the development of the social network, and made improvements. This caused a lot of jokes and memes, which further made the entrepreneur famous. The phrase "Durov, return the wall" marked the whole era of the development of Runet.

Pavel Durov was born in 1984. His father Valery Durov is a Doctor of Philology. There is an unverified information on the Internet about the Jewish nationality of the Durov family. The boy grew up in an intelligent family. In 1992 his father headed one of the departments at the philological faculty of St. Petersburg State University. But not the whole family shared his interest in human sciences.

Pavel has a brother Nikolai, a candidate of physical and mathematical sciences. Nikolai showed himself as a talented programmer. In childhood, he participated in mathematical competitions and Olympiads and twice became the absolute champion of the world in programming among students. Later, it was Nikolai who helped his brother to create the famous social network and for a long time was the technical director of the company.

Initially, Pavel lived and studied in Turin, and after returning to Russia he entered the Academy Gymnasium. The main direction of his studies was philology. In the 11th grade, he became interested in programming, virtual computer projects.

After graduation from the gymnasium, the young genius entered the Faculty of Philology of the St. Petersburg State University. During his studies at the university, he often became a laureate of the Potaninov Award.

In addition to studying languages and programming, Pavel Durov was engaged in military training. He received the rank of a lieutenant. He studied at the University until 2006 and got a red diploma. Pavel did not take his diploma from the university. Back in his youth, the future millionaire decided that he did not want to spend every day doing the monotonous office work, and understood that he should create Internet projects.

Durov tried to make the exchange of messages and useful information easier for people when he studied at the university. He created the library of search of important materials, essays as well as a small forum for students.

The desire to create a practical portal for communication appeared after a meeting with a friend who came from another country. The story about the social network Facebook allowed to create a mock-up of the future project of a multi-user Russian-language resource.

His brother Nikolai helped Pavel Durov to create "VKontakte". The first official user registered in the social network in October 2006. The network was not for everyone. Only invited participants could use VK. In December 2006, the portal began to register all people.

Initially, the social network was called "Students.ru". But soon it was changed to a better name- "VKontakte".

The project's promotion and expansion took about two years. The period of formation allowed to significantly improve the design and maximize the interface of the project. The received system became convenient and practical for any user. In 2008, the number of registered users of "VKontakte" exceeded 20 million, and Pavel Durov became a real legend, who was compared to the creator of Facebook Mark Zuckerberg.

Till this time there are disputes about the reasons for Durov's departure from the company.

After a long "war", Pavel Durov sold VK to Mail.ru Group, which users do not like for advertising and their side-projects. It also caused a wave of discontent. The company became the owner of a controlling stake (52%). In the same year The UCP Fund, the owner of the remaining shares, said that the actions of Mail.ru Group were contrary to the interests of the "VK" and initiated legal proceedings.

After leaving Vkontakte, Pavel did not stop developing new projects. On August 14th, 2013 Telegram appeared. The new messenger did not have revolutionary functions, its feature was different. This project Durov used a special encryption technology correspondence, which was invented by Nicolai Durov, and created a truly safe channel of communication. Pavel admitted that this idea appeared when one day Special Forces came to him, and he could not even tell his relatives about it. He wasn’t sure that the message was safe.

Representatives of the government several times suggested blocking Telegram if it does not change its privacy policy. Pavel refused and officially stated that the messenger did not give and will not give personal data of its users.

On April 22, 2014, the information appeared that Pavel Durov left Russia and was not going to return. The businessman published a list of requirements to the country, after which he is ready to return to his homeland. The text reveals many political and social problems of the state.

According to him, it is impossible to work in Russia now, and abroad he will work closely on the development of a special social network for mobile devices. He has a great potential and sufficient work experience. So, it is expected that it will be a high-quality project.

Pavel became a citizen of St. Kitts and Nevis but does not live there. The passport of this small state allows Durov to travel the world without difficulties.

In 2016, Pavel openly confronts with the FBI. Durov again refused to give out personal data of users, and the FBI hacked Telegram. Now Durov is developing new solutions to confidentiality of correspondence and criticizing the actions of the government.

Net worth and Forbes

Pavel Durov is a ruble billionaire. In 2011, his net worth estimated at 7.9 billion rubles. And these figures seem to be underestimated to analysts since different applications should bring more money to Pavel. For example, only the game "Happy Farm" gives about 10 billion rubles a year. In addition to it, there are other popular applications created by Durov. In the same year, Pavel, only on the basis of his official income, got to the list of the richest people in Russia and took the 350th place.

In Forbes, Durov takes 135th place in the ranking of the richest Russian businessmen. According to the magazine, his income is $ 0.6 billion.

Durov is a vegetarian, according to some reports, even became a vegan. In addition, Paul does not drink alcohol and likes to travel.

Durov's friends tell that he is a workaholic. Pavel is polite, uncommunicative and does not like to talk about his personal life. At the same time, it is known that Pavel is a big fan of beautiful girls. On the Internet, his photographs with models often appeared.

Such secrecy created many speculations. It is believed that the young entrepreneur is not officially married, but he has a civil wife Daria Bondarenko, who even gave birth to Pavel’s two children. There are proofs of communication between Durov and the girl. Also, there is no information that the billionaire has children. In social networks and on Instagram the girl also does not have photos of children. Durov himself refuses to comment on his personal life. It is unknown whether Pavel Durov has a girlfriend or not.

There are also rumors that Pavel Durov had relations with Alena Shishkova and Vika Odintsova, but there is no confirmed information.

Not only the marital status of a businessman attracts attention but also his appearance. Durov's classmates say that in his youth he had rare hair and even receding hairline. And in the official photos, a young businessman has beautiful and healthy hair. This gave rise to numerous disputes. Some sources say that Durov transplanted his hair. The most extravagant commentators believe that Paul wears a wig. Some people say that Durov had a plastic surgery.

Pavel Durov's hot temper often led to scandals. So, a wide resonance in the society was caused by a photo of Pavel Durov with a raised middle finger, which, according to the creator of VKontakte, became the official response to the offer of Mail.ru Group to buy out the social network.

Also, there was a scandal when Durov threw money out of the window of the central office of "VKontakte", folded in the form of paper airplanes. This act of Pavel Durov was criticized by Russian cultural and political figures. Pave told in an interview that he had no evil intention, only wanted to create a festive atmosphere. He said that he threw money out of the window and was glad to see both the pandemonium and the reaction of people not because he wanted to prove his wealth and importance, but because he saw surprise and joy on the faces of the people. According to approximate calculations, Durov and top managers of Vkontakte threw out of the window about $ 2,000. At that time Pavel lived in a rented apartment near the office and always allowed the developers of the company to spend nights at his house. 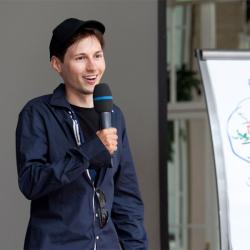