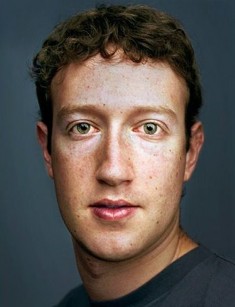 Mark Zuckerberg is an adventurous young businessman whose biography sparks interest among young people and the older generation. His name is associated with the largest social network in the world – Facebook – in which more than 1.3 users are registered. The outstanding polyglot and inventive programmer became the best in many spheres. With the official wage $1, Zuckerberg is a dollar billionaire.

Mark Elliot Zuckerberg was born on May 12, 1984, in White Plains, the suburban area of New York, into the intelligentsia family of Jewish medical professionals. Today, his parents Edward and Karen Zuckerberg continue medical practice: his father is a dentist, and his mother is a psychiatrist. The youngest billionaire’s family is large. Except for Mark Elliot, there are three children: the elder sister Randi and two younger sisters Arielle and Donna.

The Facebook founder was brought up according to strict religious norms, but as he was of full legal age, he announced he was an atheist and did not hold to the traditions of Judaism.

The boy became interested in computer programming at 10 when his father presented him a PC and demonstrated elementary and basic principles of the software programming language “Atari BASIC.” The would-be hacker got engaged in programming and created his first primitive computer games at high school. The ideas for graphics programs were created with the assistance of his school friends who could paint.

In 1996, 12-year-old Mark Zuckerberg created his first full-scale program product called ZuckNet that gave the family members the opportunity to communicate via the local net. Having finished elementary school, Zuckerberg decided to develop his programming talent and entered the prestigious boarding school “Phillips Exeter Academy” where the main focus was on programming and teaching the Ancient Greek language.

As his final paper, the programmer created “Synapse,” the program that recognized Internet users’ musical tastes – later, the company Microsoft would like to purchase it for $2 million. The executives of the giant IT company offered the young programmer to become its employee before he finished school, but the young man rejected both the payment and the collaboration because he believed inspiration was not to be sold.

In 2002, to everybody’s surprise, Mark Zuckerberg entered the Harvard University, Department of Psychology. It was his mother who influenced Mark’s decision. However, simultaneously with psychology, Zuckerberg mastered his programming skills and enrolled in additional IT courses while continuing to create his own programs. As a second-year student, he made the program “CourseMatch” due to which the students could share their experience in the subjects they studied.

Mark Zuckerberg’s second project was “Facemash” that provided the students with the opportunity to vote for the Harvard students’ photos. To create this project, the hacker broke into the university database so that he was almost suspended: the students complained about using their personal pictures without their primary consent. Despite the ban to develop “Fasemash,” the programmer did not give up the idea to make Harvard more open, so he invented an alternative project with the users’ albums protected by passwords.

The history of creating the most popular social network is as follows. Using the “Fasemash” software, Mark Zuckerberg created the communication masterpiece – the social network Facebook that expanded Harvard students’ interaction via the local net. In this work, Chris Hughes, Eduardo Saverin, and Dustin Moskovitz helped him. The young men pieced up the new site for a week, and it became much more popular than “Fasemash.”

In a few days, the Facebook project expanded from the Harvard campus: The Ivy League universities in Boston, New York, Massachusetts, and Canada joined it. Soon, Stanford Univerisity and Columbia University joined, too.

The idea of the social network was to post photos and information on personal pages, from scientific interests to tastes in food. Due to this, the net was filled with interest groups in no time, and they have been expanding each day.

Soon, the Facebook creator Mark Zuckerberg realized that to develop the project, considerable investments were necessary. Following Bill Gates’s example, he quitted the university and invested the money his parents saved for his studies ($85 thousand) to his pet project. In summer 2004, the programmer moved to Palo Alto, registered his project as a legal body, and became the Facebook CEO.

Later, Mark Zuckerberg managed to attract rich investors who helped him expand the social network globally. Sean Parker, the iconic figure of the American Internet and the creator of the sharing service Napster, Peter Thiel, the co-founder of the payment system PayPal who contributed $500 thousand in Facebook, and Reid Hoffman, the creator of the first business social network “Linkedin” were among the hacker’s helpmates.

In 2005, Mark Zuckerberg purchased the domain Facebook.com for $200 thousand. At that moment, there were more than 5 million of users in the social network, and their number was growing. Facebook was the 7th among the most popular American sites. It drew the attention of IT business sharks who suggested Mark Zuckerberg sell his project. Still, the offers brought no results – Mark refused to sell Facebook and continued to develop the network at record-breaking speed.

In 2007, Mark Zuckerberg’s hour of triumph happened: Microsoft estimated the project at $15 billion and bought 1.6% of the company’s stock for $240 million. In 2008, the programmer opened the company’s international main office in Dublin, and in 2009, he announced about the first benefit. Since that moment, the social network Facebook opened the platform codes for everybody who would like to create new applications for the project. Thanks to this measure, approximately 140 apps are being uploaded to the site every day.

In 2015, Facebook became the second most frequently visited site in the world, and Mark Zuckerberg was named the youngest dollar billionaire with the official $1 wage. The programmer won the titles of the most influential person in the world and the super-successful businessman younger than 40.

The red-headed and not so tall (1.66m) billionaire Mark Zuckerberg’s personal life does not correspond to conventional ideas about the richest person in the world. He leads a close life, never makes display of his wealth, and never throws cash around.

In 2012, Mark married his old friend Priscilla Chan whom he had met in 2002 at Harvard students’ party. At the end of 2015, their daughter Max was born. It was the happiest moment in the couple’s life since they had been dreaming about a child.

Before 2015, the billionaire lived in rented houses and did not spend his money on his own dwelling. As he learned about his wife’s pregnancy, Mark Zuckerberg created a cozy family home to provide his long-awaited first-born with comfort. The house cost $7 million. It is situated in the historic downtown of Silicon Valley, Palo Alto, 10-minute drive from the Facebook office in Menlo Park.

The accounts’ owner was given back the access, and the traces of hacking were deleted.

In May 2017, the billionaire got the diploma and an honorary Doctor of Laws degree in Harvard. The Facebook founder’s parents and wife were present at the ceremony.

According to Forbes, in 2017, 33-year-old Mark Zuckerberg’s wealth equaled $69.5 billion. It means he became richer than Google founders Sergey Brin and Larry Page.

The young billionaire does not consider himself a person obsessed with wealth accumulation. He is the member of dozens of charity organizations and the group “The Giving Pledge” whose members promise to donate a half of their wealth.

At the end of 2015, Mark Zuckerberg announced he was going to donate 99% of his Facebook stock and to develop the sphere of children’s personalized teaching all over the world, public health care service enhancement, and communication means modernization. 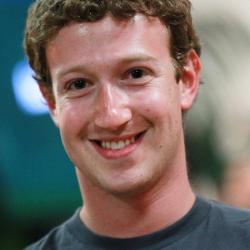