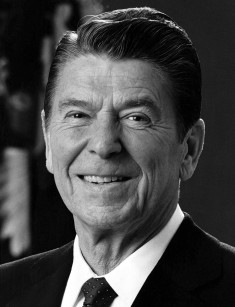 The Republican Ronald Reagan was the 40th President of the United States (1981-1989). He fully revised the goals of the US government and put an end to the cold war with the USSR. Before the presidency, Reagan was a Hollywood actor, the President of the Screen Actors Guild, and the Governor of California. His life was full of significant events and achievements.

The would-be president’s parents John Edward “Jake” Reagan and Nelly Willson Reagan descended from English, Irish, and Scottish migrants. The family was not rich and often changed the residence. When the mother was pregnant with Ronald, they lived in Tampico, Illinois, US. The boy was born on February 6, 1911. Ronald was the second child: he had the elder brother Neil Reagan.

In Tampico, Ronald’s father had his own shoe store. In 1920, the family moved to Dixon, Illinois, and settled there for a long time. The boy went to Dixon High school and graduated in 1928. As a student, he played sports, participated in school performances, and worked part-time as a bodyguard during his vacation. The young man won the sports scholarship and entered the Eureka College.

Since 1932, Reagan worked in Iowa as a radio sports commentator. In 1937, the confident, tall, and handsome young man went to Hollywood. The dream factory provided him with a job: the studio “Warner Brothers” signed a seven-year agreement with Reagan.

In the following years, Reagan was making numerous movies; his filmography includes more than 50 projects. It is interesting that Reagan had a double, the actor who was almost impossible to distinguish from the real Ronald.

The future president achieved a lot as a union leader. He was an active member of the Screen Actors Guild founded in 1937: the young man took part in governing the organization and became its president in 1947. He led the guild until 1952.

After the home-study army extension courses, the young man was enlisted in the army reserve. Reagan got the lieutenant rank and joined the cavalry regiment. Because of his bad eyesight, he was released from military service abroad, so Ronald Reagan was making study movies for the army during the war.

The movie career was declining. In 1954, Reagan was offered the position of a TV presenter in the weekly drama series “General Electrics Theater.” At this time, the man changed his political outlook: the liberal turned into the conservative.

The beginning of the political career

During his work in General Electric, Reagan often delivered speeches he had prepared himself; they were politicized and rarely complied with the company’s official position. Thus, Reagan was dismissed from the company in 1962. In 1964, the man participated in Barry Goldwater’s presidential campaign; his famous speech “A Time for Choosing” helped collected $1 million for Goldwater.

Californian Republicans were impressed by Reagan’s political views, his charisma, and the speech “A Time for Choosing.” In 1996, he was nominated as a candidate for the Governor of California position. Reagan’s campaign was notable for the main theme: idlers who lived on social programs were to be sent to work and the University of California, Berkeley, was to be purified from the turmoil of students’ antiwar protests and ultra-radical and other opposition groups.

According to his friend astrologist’s recommendation, Reagan took the oath at 12.09 a.m. on January 3, 1967. In 1968, soon after he became the Governor, he participated in the presidential elections and placed the third after Rockefeller and Nixon who became the winner.

Reagan’s governorship is associated with the breaking up the protests in People’s Park Berkeley: during the so-called “Bloody Thursday,” the police and 200 National Guards were sent to manage the protesters.

In 1968, the attempt to withdraw Reagan was not successful and he was elected again. During his governorship, the man formed his political opinions once and for all; he followed them as a president. Reagan supported the state economy control decrease and fought the inappropriate high federal taxes.

In 1976, Ronald Reagan challenged Gerald Ford in the presidential elections and lost. However, he did not give up and nominated himself for the presidency in 1980 when Jimmy Carter was his opponent. Reagan won in 44 states and became the oldest US President.

Throughout his presidency, there were many significant changes in the country’s economy, domestic, and international policy. The American’s morale was boosted: people learned how to rely on themselves, not the government. The President was always writing diaries; later, they were published in the bestselling book “The Reagan Diaries.”

Reagan himself created his inauguration speech about the country’s economic ordeals and delivered it on January 20, 1981. As he was giving the speech, 52 American hostages were released in Iran. Two months later, an attempt was made on the president’s life when he was leaving a hotel in Washington, DC.

One of the bullets got into Reagan’s lung, others injured the people who were accompanying him. The president had surgery and recovered soon; the three injured individuals survived as well. John Hinckley Jr. who made the attempt was declared mentally disabled and sent to a clinic. Before this event, he was stalking President Jimmy Carter because he wanted to attract the actress Jodi Foster whom he loved.

Reagan’s domestic policy was based on social programs reduction and business encouragement. The development of economy was stimulated by the tax decrease. The ideas of military complex expenditure increase and private business state control elimination were promoted. In 1983, the US economy began to improve.

Critics considered Reagan’s international policy to be imperialistic, aggressive, and aimed at war-escalating. In reply, the conservative forces supported it and explained it was necessary to protect the US security.

Regan’s presidency was marked with the Iran–Contra affair scandal: the weapon supply of American opponents in Iran included complex schemes. The money was intended to be used by anticommunist rebels in Central America.

Ronald Reagan and Mikhail Gorbachev’s partnership was a significant event: in 1987, the US and USSR presidents signed the important document, the Intermediate-Range Nuclear Forces Treaty.

The actress Nancy Davis became Ronald’s second wife. She asked the President of the Screen Actors Guild to remove her from the “black list” of the Hollywood where her name was included by mistake. It was the love from the first sight. This meeting was the beginning of the long and happy marriage. On October 22, 1952, the daughter Patricia was born; the son Ron was born on May 20, 1958.

Ronald and Nancy were very close, and their relationship was never routine. Throughout the years, their feelings grew stronger and remained as bright as they used to be in their youth. In 1989, Reagan and his wife left the White House and came back to Los Angeles.

In November 1994, the former US president was diagnosed with Alzheimer’s disease. After that, he lived 10 years and passed away on June 5, 2004, in his own house. He was 93 years old. Pneumonia accompanied by Alzheimer’s disease and senior age were the causes of death.

The ex-president was buried in California, on the territory of the Presidential Library. 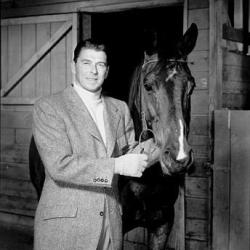