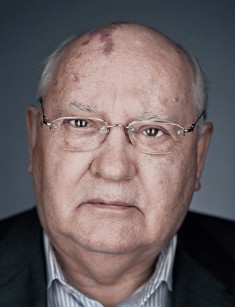 Mikhail Gorbachev is the state and social personality of the 20th-century Russia who entered the political world in the Soviet epoch. Gorbachev was the first and only President of the USSR whose political activity results went down in the country’s history and became a significant factor for the rest of the world. The politician’s name is associated with perestroika that led to changes in the Russian life and the global political atmosphere. Gorbachev’s role in the country’s development is ambiguous: some believe that he brought more good than harm, others are convinced the politician has caused all the troubles modern Russia has had to face since the Soviet Union collapse.

Mikhail Sergeyevich Gorbachev was born on March 2, 1931, in the Stavropol village Privolnoye. The would-be president’s parents Sergey Andreevich and Maria Panteleevna were peasants so the boy spent his childhood without seeing luxury. Young Mikhail Sergeyevich had to survive the German occupation of Stavropol that made a considerable influence on the young man’s character and political opinion later.

At 13, Gorbachev went to school and simultaneously worked at the kolkhoz: at first, it was a mechanical-tractor station, later, the teenager was a combine harvester operator’s assistant. The job was far from being easy; in 1949, Mikhail Sergeyevich was awarded Labor Red Banner Order for exceeding the crop harvesting planned target.

Next year, Gorbachev finished the local school with a silver medal and easily entered Moscow State University, Faculty of Law. The future politician led the student Komsomol organization where he was inspired by freedom of thought and shaped his worldview. In 1952, Gorbachev was accepted to the Communist party; three years later, the young man graduated from the university and got the position of the First Party Secretary of the Stavropol Regional Committee.

As he got his first Komsomol work, Mikhail Sergeyevich decided to build his career in politics, not law, and declined the local prosecutor’s office job offer. In 1967, the future Soviet leader graduated from the Stavropol Institute of Agriculture by correspondence and obtained his agricultural economist diploma.

Gorbachev’s political career was developing rapidly. In 1962, he was appointed Head of the Department of Party Organs in the Stavropol Regional Production Committee and earned his reputation as a promising politician during the Soviet leader Nikita Khrushchev’s reforms. Gorbachev had no special charisma or memorable appearance (the politician’s height was average, 175 cm.), so he had to fight his way via his skills and work-related qualities.

With good harvesting in Stavropol, Mikhail Sergeyevich proved himself a leading expert in agriculture which gave him the opportunity to become the agriculture ideologist of the Communist Party later.

In 1974, Gorbachev was elected in the Supreme Soviet of the USSR where he became the Chairman of the Standing Commission on Youth Affairs. In 1978, the politician was transferred to Moscow and appointed to the Central Committee's Secretariat for Agriculture – this decision was initiated by the former Soviet leader Yuri Andropov who saw in Mikhail Sergeyevich an educated and experienced professional.

In 1980, Gorbachev became the member of the CC CPSU Politburo and worked on many reforms in the market economy and political system. In 1984, the politician delivered the report “Lively Creativity of People” that became a kind of “prelude” to the rebuilding of the country. The report was welcomed by Gorbachev’s colleagues and the Soviet people.

General secretary of the Communist Party of the Soviet Union

As Mikhail Sergeyevich gained support and created the image of a global reformer, he was elected General Secretary of the Communist Party in 1985. Since that time, the Soviet Union was undergoing the global process of social democratization which was later called perestroika.

As soon as Mikhail Gorbachev became the leader of the second superpower, he started pulling the country out of stagnation. Without a clear plan, the politician performed some changes in the foreign and domestic politics of the USSR which later resulted in the country’s collapse.

Gorbachev is known for the prohibition of alcohol, money exchange, profit-and-loss accountancy introduction, ending the cold war, and reducing nuclear danger. Besides, the general secretary liberalized the society and relaxed censorship which gave Gorbachev the chance to win the population’s favor: for the first time in the USSR history, the country’s leader communicated with people in a free, not “czarist” manner.

The economic reforms inconsistency was the major mistake of Gorbachev’s politics. As a result, the crisis in the country deepened, and the quality of life worsened. At that period, the Baltic countries began to distance themselves from the USSR. However, it did not prevent Gorbachev from becoming the elected president of the USSR in 1990 according to the country’s revised law.

As the control over the society was reduced, there was a diarchy in the Soviet Union. The country was paralyzed by strikes, and the economic crisis led to the mass deficit and empty shelves in stores. At that period, 10% of the country’s gold reserves were spent on food. The situation was almost critical. Mikhail Sergeyevich failed to prevent the USSR collapse and his own resignation.

In August 1991, Gorbachev’s supporters including some Soviet ministers announced the establishment of the State Committee on the State of Emergency (SCSE) and demanded Mikhail Sergeyevich resign. Gorbachev did not agree and thus provoked the violent upheaval which was called the Putsch of August 1991. The Russian SFSR political leaders including the then president of the republic Boris Yeltsin, Alexander Rutskoy, Ruslan Khasbulatov, and Ivan Silayev resisted SCSE.

In December 1991, eleven Union Republics signed the Belavezha Accords and created the Commonwealth of Independent States (CIS) thus officially declaring the USSR ceased to exist, despite Mikhail Sergeyevich’s disagreement. After that, Gorbachev resigned and washed his hands from politics to devote himself to social activities. Creating “The International Foundation for Socio-Economic and Political Studies” was the last USSR President’s executive order. In 1992, he became the president of the foundation. The politician conducted research on the history of the perestroika process in the USSR and studied urgent political issues. The Gorbachev Foundation is financed with the former leader’s personal funds and people’s and international organization’s donations.

Gorbachev’s governance is still widely discussed. Many people consider Gorbachev to be the guilty one in the Soviet Union collapse which endangered the Russian sovereignty. However, the former leader believes this criticism is unjustified. Gorbachev positively views the political course of the current Russian President Vladimir Putin and supports his position on Crimea and Ukraine.

Mikhail Sergeyevich welcomes the reunion of the Crimean Peninsula and Russian Federation and believes the people’s will manifestation is the historical error recovery. At the same time, he guesstimates the Ukrainian issue may lead to increased tensions between Russia and European Union and risks of a large conflict, if not a nuclear war, escalation.

Mikhail Gorbachev’s personal life was as “one-episode” as his political career. The man met his future wife Raisa Titarenko at a House of Culture dance party when he was a student. The young woman’s modesty and internal beauty charmed the future Soviet leader and he decided to marry Raisa by all means. To earn for the marriage, the student was working part-time at the Stavropol kolkhoz; in 1953, he collected enough money to celebrate the wedding.

The couple lived a happy and long life together. In 1999, Mikhail Sergeyevich was widowed – his wife Raisa died of leukemia. It was a severe blow for Gorbachev. The first USSR lady gave birth to the daughter Irina who lives in Moscow today and has two adult children. Gorbachev’s granddaughters are married.

In 2015, the media announced Mikhail Gorbachev’s health worsened. He suffers from a complicated form of diabetes so his condition is never stable: the politician often has crises and medics have to hospitalize him to improve his overall condition.

With all these health issues, Gorbachev continues to publish new academic works and memoirs. He created the book about the love of his life “Tet-a-Tet with Myself.” In 2014, Mikhail Gorbachev’s book “Post-Kremlin Life.”

Gorbachev’s financial status also deteriorated. The former president lives in a Moscow apartment and dacha in Moscow region. He sold his German house in Oberach near lake Tegernsee in the Bavarian Alpes. Gorbachev has not visited Germany since 2014.

In 2016, the politician recognized his responsibility for the Soviet Union collapse at the meeting with the students of The Moscow School of Economics, Lomonosov Moscow State University.

In 2016, Mikhail Gorbachev was prohibited the entry to Ukraine. The politician told journalists that he had not gone to that country for years and did not plan to visit it in the nearest future.

In September 201., Mikhail Gorbachev presented his new autobiographical book “I Remain an Optimist” which contained stories from the politician’s biography, harsh criticism of present-day Russia, and its political and social situation. 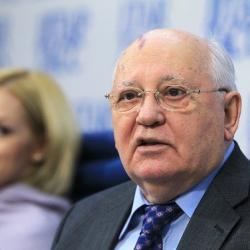