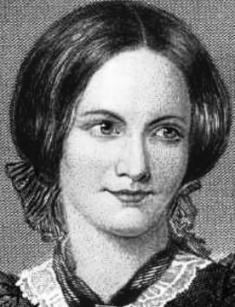 Charlotte Brontë is a well-known English writer, a supporter of the feminist movement in literature. The author of the cult novel " Jane Eyre," a popular movie was filmed, based on this book. The writer created such stories as " Shirley," " The Professor " and "Emma."

The future novelist was born on April 21, 1816, in the West Riding of Yorkshire, a historic County in the north of England. This place is full of high mountains, endless fields and is characterized by exceptional fertility. Charlotte was the third child in her family. Her father Patrick Brontë, an Englishman of Irish descent, served in the church and her mother Maria Branwell was a housewife.

The medicine was not developed at that time. Such diseases as scarlet fever, diphtheria and cholera were very popular and infant mortality progressed too. But the children of Patrick and Maria survived miraculously. Charlotte was raised in a large family, in which, in addition to her, there were five girls and one boy.

Her younger sister, Anne Brontë, became a writer, who wrote such books as "Agnes Grey" and "The Tenant of Wildfell Hall." She wrote many poems but she did not gain the same fame as her elder sister. The fifth daughter Emily Brontë chose a creative path too and became the author of the only but significant novel " Wuthering Heights."

The only son Patrick was addicted to writing too but later he became the artist. Modern readers have an idea of how the novelists looked like thanks to this artist because Patrick painted numerous portraits of his famous relatives.

In 1820, Brontë moved to the village, which was located in the County of the West Riding of Yorkshire. On September 15, 1821, the very tragic event happened: Maria died of uterine cancer, so the men had a deal with the hardships and troubles of child care.

In 1824, Patrick sent his daughters to the Clergy Daughters' School at Cowan Bridge in Lancashire. The future novelist was not a child prodigy but the teachers said that an eight-year-old girl was much smarter than her age. However, her knowledge was sketchy: Charlotte could not count and did not know anything about grammar and ethics.

Later, Charlotte recalled that there were poor conditions in the boarding house that worsened the poor health of her elder sisters. In the winter of 1825, Maria had tuberculosis and Elizabeth had consumption three months later. Tuberculosis was a deadly and almost incurable disease at that time. The girls couldn`t recover and soon died. Patrick was concerned that the epidemic would affect his other daughters and he took Emily and Charlotte to Haworth.

Charlotte, Emily, Anne began writing to dilute the gray days with bright colors at home. The sisters sat down at the table in their spare time and created adventure stories that took place in fictional magical worlds and kingdoms. Charlotte and her brother wrote a work about a fictional English colony in Africa and came up with a perfect capital. And Emily and Anne were the authors of a series of stories called " The Gondal Chronicles." According to rumors, Brontë destroyed the manuscript shortly before death.

In 1831-1832, the future storyteller continued her education at Roe Head in Mirfield, where she showed her best side. Margaret Fuller worked as a director at this institution, with whom Brontë kept friendly relations to the end of her life, although there were conflicts between the ladies. She met her lifelong friends and correspondents Ellen Nussey and Mary Taylor.

Having received a diploma, Charlotte began to work as a teacher. But the girl did not like this profession. It contrasted with those imaginary worlds, which were created by her brother and sisters. The novelist did not consider the profession of a teacher to be something unusually bright, which is connected with imagination and creativity. Brontë tried to work as a writer but there was no time for literary activity. Therefore, there was only a small part of the poems and excerpts of works, which were written in the short week of school holidays.

It is worth saying that Charlotte cared about the education of her sisters. She brought Emily to school and paid for her studies on her own, after consulting with her father. But the girl could not get along in a place, which was far from home with other laws and customs. In the end, Emily decided to go back to Haworth. Then Anne took her place. Later, the school moved to Dewsbury Moor, where there was a gloomy and unhealthy atmosphere. Charlotte and Anne left the school because they thought that the new area affected their health and state of mind.

"An earnest attitude to the writing business is one of two necessary conditions. Unfortunately, the second condition is talent."

Charlotte had these qualities from early childhood: Brontë wrote the first verse when she was 13 years old (her first prose was written at the age of 10). The future novelist began to act. The girl sent her several debut poems to the eminent English poet, novelist Robert Southey. This master is known for the tale about the girl, who visited three bears (the Russian reader knows this work, " Masha and the Three Bears " thanks to the translation of Leo Tolstoy).

Unfortunately, biographers do not know which of the poems the girl gave to the writer. But we can assume that Charlotte's lines were full of exaltation and pretentious-sublime turns thanks to Robert's answer. Southey advised the young poet to cool her ardor. In his opinion, Charlotte was full of enthusiasm and this feeling is harmful to mental health. Also, Robert believed that these typical women's duties must be a priority for young ladies.

The response of the master had a positive impact on Brontë: the girl stopped writing poetry and started to write prose and preferred realism to romanticism. In 1833, Charlotte Brontë wrote her early novel "The Green Dwarf, A Tale of the Perfect Tense." The girl concealed the real name from the public eye and used a pseudonym Lord Charles Albert Florian Wellesley. This work, which was written in the Gothic style, influenced the founder of the historical novel, Walter Scott.

In 1840, the novelist wrote the novel "Ashworth" (which remained unfinished). The biography of Alexander Ashworth was the basis of the work. Alexander is neat and smart but he has an obstinate character. The young man does not get along with his father, so he leaves home, like a prodigal son.

It would seem that the story of Charlotte could grow into a favorite book but the writer Hartley Coleridge criticized her work. Charlotte agreed with the opinion of the writer and finished working on the book. The work "The Professor" is Brontë's debut novel, which was published in 1857. The writer tried to sell this work to the editors but her attempts were in vain because they stated that there was a lack of fascination in her works.

There were many literary ups and downs in Charlotte's life. But this novelist became famous thanks to the world-famous novel "Jane Eyre," which was published in 1847. This book tells the story of a young orphaned girl Jane. The only relative of the heroine is Mrs. Reed, who dislikes her niece and tries to find a case to punish the "guilty" girl.

She goes to school soon, her relationships with students are well but there is epidemic typhus at school. So, Jane's best friend dies. The plot of this novel is trivial and tells about the life of a little man. But Brontë did not use to use a classic cliché like many novelists.

As you know, the white stripe of life is always replaced by a black one. It would seem that Charlotte achieved success and became a recognizable artist. But there was a tragic event in her life: she lost her brother and two sisters. Emily and Anne died of tuberculosis. Branwell was addicted to alcohol in his last years. This habit only worsened his physical condition. The young man died of bronchitis. As a result, Charlotte and Patrick were alone.

There were many gentlemen in the life of the artist, who wanted to propose to her. But she was in no hurry to get married. Brontë met with an assistant priest Arthur Bell Nicholls, who became the chosen one of Charlotte. Initially, the future husband of the writer made an unpleasant impression on her. Brontë wrote in her diary that Arthur had a narrow mind and limited horizons. The wedding took place in the summer of 1854. The couple had no children.

In the winter of 1855, the novelist went to bed; her health was terrible. The doctor assured that she felt terrible because of signs of pregnancy. Charlotte felt sick every day and could not eat; it gave her signs of anorexia. Charlotte Brontë earned $87 Million.

In the spring of the same year, Charlotte Brontë died. The exact cause of death of the great artist is not established. There were rumors that Charlotte died of tuberculosis, toxicosis or typhoid.