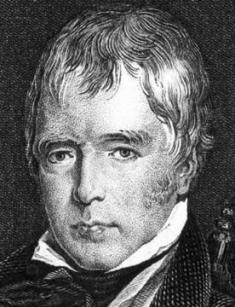 No wonder that people call Sir Walter Scott the father of English literature. After all, it was this genius author who became one of the first ones to write in the genre of the historical novel. The manuscripts of the gifted literary master made an impact on the work of many writers of the 19th and 20th centuries. It is said that Walter Scott's books were translated in numerous countries with the speed of light. The Englishman's novel, written in 1829, in 1930 was already read aloud in elite circles of aristocratic ladies and gentlemen.

The famous author was born to be the ninth child on August 15, 1771, in the capital of Scotland, Edinburgh, the city full of sightseeing places, cathedrals and winding narrow stone streets. The future novelist grew up in a large Presbyterian family. There were thirteen kids, and only six of them survived childhood. The family lived on the third floor in an apartment building, located in a narrow alley that leads from Cowgate to the gates of the oldest University.

Walter Scott was brought up in the family of a Scottish professional lawyer, Walter Scott. Noble clients often turned to the head of the family for legal assistance, but Walter Sr. was modest and meek, that is why he did not manage to make a fortune. The writer's mother, Anne Rutherford, was the daughter of an eminent Professor of medicine, who worked at the University of Edinburgh. Anne was a modest well-read woman who adored antics and historical novels. She was able to pass these qualities to her son as well.

One cannot say that the future novelist had a happy childhood. An unexpected illness poisoned the existence of the little boy. The thing is that when Walter was one and a half years old, he was diagnosed with children's paralysis, so throughout his childhood years, the kid was desperately fighting for life. In the years 1775-1777 Walter was treated at the resorts and stayed at the farm of his grandfather (where young Scott first became acquainted with folk epos and folklore). But this unexpected disease reminded Walter of itself throughout his life, for the great writer always remained lame (he lost mobility of his right leg).

In 1778, the young man returned to his native Edinburgh and began attending primary school. Walter was not enthusiastic about the lessons; the future writer especially did not like complex algebraic formulas. But it is worth noting that Scott grew up a phenomenal child: even at the age of five he already read the ancient Greek works of Homer and could easily recite memorized ballads.

Throughout his life, Walter was engaged in self-education, and the school bench did not leave a considerable mark on the author's knowledge. After all, even the literary detective, Conan Doyle used to say that the human brain was an empty attic where one could stuff anything. The fool does exactly so: piles up both necessary and needless things there. And finally, there comes a moment when a fool cannot stuff an essential item there since there is no more space left.

That is why to be able to get to the necessary things in his memory palace, Walter brought only the most useful things there, "must-haves," so to say. Therefore, in the future, considerable baggage of necessary knowledge helped Scott write on almost any topic.

Walter was a naughty student, a regular of boyish fights and brawls, and he loved to run around during the breaks. Besides, Walter realized the potential of the narrator between lessons. Crowds of peers gathered around the future novelist and listened breathlessly to his amazing stories that reminded them of the adventure books by prominent authors.

In his youth, Scott also became a famous climber: physically developed boy easily conquered the mountain peaks, giving his friends an example of courage, bravery and excellent sports training. When the future writer was twelve years old, he went to College. However, the disease of the genius determined the writer's future once again: a year later, young Scott suffered internal bleeding in the gut, which is why he failed to continue his education.

In the enlightenment period, medicine was not developed yet; many medical rituals of those years astound modern readers to this day. To bring the physical condition back to normal, Walter Scott had to go through all the circles of hell. The boy stood naked in the bitter cold for several hours, went to bloodletting procedures, and also sat on a strict two-month diet and limited himself to his favorite delicacies. After a long treatment, which lasted two years, the young man returned to his hometown and followed in the footsteps of his father, becoming a student in his law firm.

Walter did not like the tedious work in the office of his father; the paperwork only made the young man sad and dull. However, young Scott still tried to somehow benefit from the routine work. To mix up the usual gloomy days, the young man tried to use ink and pen to portray fantastic adventure worlds. Also, by filling up various legal documents and doing the paperwork, Walter received a small salary which he spent on favorite books.

At the insistence of his parent, Walter chose to practice law as his career path. In 1792, the young man passed the exams at the University and received a law degree. Since then, Scott was considered a respectable man in society with a prestigious profession and education.

Scott spent the first years of his working life with benefit: he traveled to different cities and countries, got acquainted with the experience and traditions of other people, as well as with the traditional legends and ballads of Scotland. It is not surprising that such visits went only on hand to a novice writer and are reflected in many novels.

At the same time, Walter began to plunge into the vast worlds of German poetry: the young man translated every line of the masters with a thrill. The translations were published anonymously, without the author's name, including the famous ballad of Gottfried August Bürger called Lenore and drama Götz von Berlichingen by Johann Wolfgang von Goethe based on the memoirs of the historical adventurer-poet Gottfried or Götz von Berlichingen.

Sir Walter Scott, like Franz Kafka, did not believe that the literary field can be regarded as the primary income in life and did not want to acquire fame and recognition – to put it mildly, Scott shunned popularity and treated writing without zealotry. Writing for Scott was nothing more than a favorite pastime that brightened up the lonely hours of life and brought new emotions and colors to the canvas of being.

The novelist preferred to live in peace and quiet, devoting a significant amount of time to his favorite occupation – planting trees. Walter Scott began his creative biography not only with translations but also with poetry. His first work – the ballad The Eve of St. Jone (1800) – was seasoned with notes of romance. The writer continued to collect Scottish folklore, which was the basis of his debut manuscripts.

In 1808, Walter Scott became an innovator in the literary world, developing a poem under the name Marmion. Surprisingly, even such a venerable genius can have creative falls along with takeoffs: Scott's creation was blown to smithereens by critics. The thing is that they dismissed the master's plot as unclear: his protagonist had a mixture of virtue and evil, and those qualities did not fit the classical hero.

Francis Jeffrey said that the plot of Marmion was flat and tedious. However, such a cool reception of literary critics did not have a significant impact on the author's reputation. Russian writers received the novel in verse well. For example, Zhukovsky loosely interpreted Scott's lines in his books, and Mikhail Lermontov, as if imitating Walter, wrote the poem "Ishmael Bay," which takes place in the Caucasus. And even Lord Byron himself found the plot of Marmion attractive and drew parallels with this poem in his many creations.

Scott also composed the works The Lady of the Lake (1810) and Rokeby (1813), due to which he became the real founder of a new genre – a narrative poem. And the author, like Shakespeare, skillfully mixed fiction with a true story, which made out his unique style. Thus, the plot in the works of the master of the pen did not stand still but moved forward: the changes of the era influenced the fate of the characters.

The writer loved to read Old Gothic novels but did not follow in the footsteps of his predecessors. Walter did not want to make use of excessive mystification that made Edgar Allan Poe famous and did not have a desire to become the author of "antique" novels either. In his opinion, a lot of archaisms would simple become incomprehensible to the reader of the enlightenment period.

Even though Sir Walter Scott struggled with poor health from his childhood, as well as poor eyesight, he worked very productively and managed to create at least two books a year. In total, the master managed to compose 28 novels, as well as various ballads and stories, critical articles and other creative works.

Such works of the author as The Antiquary (1816), Ivanhoe (1820), The Abbot (1820), Quentin Durward (1823), The Talisman (1825), The Fair Maid of Perth (1828) and many others have become a home Bible for writers of later period. For example, Charlotte Brontë, Arthur Conan Doyle, Lord Byron, Jane Austen, and other famous literary figures used his manuscripts as the basis of their literary works.

Scott's personal life was not cloudless. When he was 20 years old, Walter's chest was pierced with the arrow of the treacherous Cupid for the first time. The young man felt love for some of Miss Stuart Belches, the daughter of the lawyer who was five years younger than her admirer. The writer for five years sought mutual love from this careless young lady, who accepted the courtship of the gentleman but did not hurry to calm his ardor with a definite answer.

In the end, Belches chose another young man over Walter, William Forbes, the son of an eminent banker. Unrequited love was a blow to the author of novels, but at the same time, it provided him with the basis for new works, the protagonists of which were characters with broken hearts.

In 1796, the writer married Charlotte Carpenter (Charpentier) who gave her lover four children – two girls and boys. In life, Walter Scott did not like noisy events and fantastic adventures, the inventor of the novels in verse used to spend time in confinement, surrounded by family and loved ones. And even more so Walter was not a Don Juan: the man despised fleeting affairs on the side and was utterly faithful to his wife.

In the last years of his life, the writer's health began to deteriorate sharply, Walter Scott suffered three apoplexy strokes. And in the autumn of 1832 61-year-old master died of a heart attack.

Monuments were installed in memory of the writer, and various documentaries and feature films were shot.