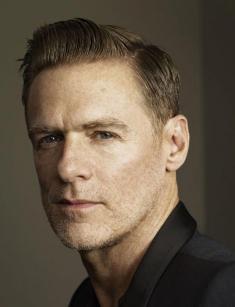 Bryan Adams is a rock musician, guitarist, songwriter and performer. Dozens of hits of the artist are performed all over the world, lyrical ballads touch the soul, and concerts are a celebration of romance, which gives good music.

Bryan Adams was born in Kingston, Canada on November 5, 1959. The mother of the future singer taught at school. His father was in the diplomatic service, that is why the family moved from one country to another. When his parents broke up, Bryan and his younger brother stayed with his mother in Vancouver.

The craving for music was manifested in the boy from childhood. At the age of 5, the child became seriously interested in classical music but lost interest in it. A new passion of the teenager became a guitar, although the strict father did not approve his son's hobby. But the mother supported all the initiatives of Bryan. The boy arranged a disco in the basement of his parents ' house, that infuriated his father. Bryan thought he was happy when he could buy a new CD.

His father and grandfather insisted on entering the military Academy but the teenager categorically refused. The creative biography of the artist began at the age of 16, shortly after the guy left school.

Who knows what would have been the career of a musician, if not intervened case. At age 18, Bryan Adams went to the store for a guitar and met the drummer James Vallance accidentally. The guys talked and Vallance offered Adams cooperation during their conversation., The musicians signed a contract with A&M Records six months later and the company signed a contract with Bryan as a solo artist.

Let Me Take You Dancing was the debut single of the new creative union, which entered the TOP 25 dance chart of America. Two hundred forty thousand CDs were sold quickly.

The first album of Bryan Adams was released in 1980 but was not very popular. The presentation of the second album took place in the summer of 1981 in Canada and America. Nevertheless, the song Lonely Nights entered the top three in the rock chart of the USA.

Soon came the third album Cuts Like a Knife. The disc was sold millions of copies, several musical ballads from the CD were in the top ten of the world charts.

Bryan managed to find the magic formula that captivated the audience in the third disc, a slow melody, beautiful choruses, and cinematic transitions. The artist used the novelty in the subsequent hits.

A studio album Reckless was released by the 25th anniversary of Bryan Adams, glorified the singer, brought five platinum certificates and a nomination for the Grammy Awards. The Canadian musician wrote music for other artists at the same time as his work.

In the spring of 1987, Bryan made his album Into The Fire. He had success and millions of copies again. The tour in support of this CD lasted more than a year.

After a grueling tour, the musician took a break. The rock singer played a role in the movie Pink Cadillac and wrote a song that was sung by Céline Dion at this time.

Adams and Vallance worked together for almost 12 years. But then their union broke up, marking the beginning of Bryan Adams ' collaboration with the composer and producer Robert Lang.

Further creative biography of Bryan Adams is closely related to the recording of new albums, as well as the creation of music for movies. The singer's songs were performed in 42 films, albums diverged millions of copies. The songs of Adams were repeatedly nominated for the Oscars, a Golden Globe and other prestigious awards.

The composition All for Love is another work by Bryan Adams, which critics will record in the "Golden Fund" of world music. The Canadian musician performed this single together with Rod Stewart and Sting.

The audience remembers the song Brothers Under The Sun that the Canadian musician wrote for the American animated film Spirit: Stallion of the Cimarron. The official soundtrack to the cartoon was accompanied by this single.

Bryan worked on new solo albums between tours. He traveled with records a large number of countries. He performed in Moscow a few times. The singer was the first among those Americans, who sings in Vietnam, he toured the Far East.

In 2002, Bryan Adams agreed to play in the film directed by Andrei Konchalovsky House of Fools.

Canada and America appreciated the merits of Adams as a rock musician, composer and performer. Bryan Adams was awarded for Order of Canada and there was a star of the rock musician on the Hollywood Walk of Fame. The solemn event took place in 2011.

The singer lives in civil marriage with Alicia Grimaldi. She graduated from Cambridge University and worked as an assistant to Bryan Adams, helped with the organization of the Charity Fund.

At the age of 51, Adams first became a father. A daughter was born in a family of the rock musician in April 2011, who was called Mirabella Bunny Adams. In November 2012, the couple announced that they expected their second child. In 2013, they had a girl Lula Rosylea.

Bryan Adams lived in France for a while but then he moved to Vancouver. He has his recording studio in Canada.

Bryan prefers to devote his time to photography in his spare time. Black and white portraits of famous women in Canada, authored by Adams, became a bestseller, they were published in a separate book too. Bryan Adams sent funds from the sale for the treatment of cancer patients. The charity has long been an integral part of the singer's life.

In 2016, the American press reported that Bryan Adams canceled the concert in Mississippi in solidarity with the gays. The Canadian musician decided not to protest against the " anti-gay "law there. The artist announced it on the social network Facebook. Bryan Adams has a net worth of $65 million.

The singer said that he was not ready to perform in a state where people are denied their rights because of sexual orientation. According to the contractor, the administrative authorities are obliged to correct such a mistake, as well as to grant the right to citizens to decide their fate.

In April 2016, Phil Bryant, the governor of Mississippi, signed the "Act to protect freedom of religion from government discrimination" (bill 1523). According to this decree, private companies and religious organizations have the right to refuse services to persons of non-traditional sexual orientation.

Such protests are often organised in the United States by famous artists and companies that oppose such bans. Disney and Marvel announced their intention to boycott the state of Georgia, if the authorities of this administrative entity will not change the law, allowing clerics of different faiths to refuse same-sex couples in the organization of wedding ceremonies.

Today, the famous singer is still ready to go on a world tour, perform concerts and please the audience with his new songs. Indeed, the fans of the Canadian rock musician look forward to the emergence of his new album. The last disc, represented by Adams, was released in 2015.

At present, Bryan Adams has a net worth of $65 million.