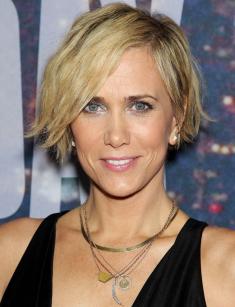 Kristen Wiig is a popular American comedy actress who earned her fame thanks to the movies Bridesmaids, The Martian, Paul, and so on. Besides, the artist participated in the TV show Saturday Night Live for nine years.

Kristen was born in Canandaigua, the suburbs of New York. The girl’s father, Jon Wiig, owned a small yacht club, and the mother, Laurie Johnston, was a professional artist and designer. Three years after their daughter was born, the family moved to Lancaster, Pennsylvania where Kristen spent her childhood and youth.

Kristen did not consider an acting career for a long time: the young woman was interested in medicine and entered a college to study psychoanalysis. However, she dropped in less than a year and came back home.

The next year, Wiig got accepted at the University of Arizona and chose art as her major. Still, Kristen could not forget medicine even then: she worked part-time as an administrator of a plastic surgery clinic. Life was going on. One day, a coincidence changed everything: Wiig almost accidentally visited a rehearsal of a student drama club; she fell in love with the stage.

Eventually, Kristen dropped the university and moved to Los Angeles to become an actress. Soon, she joined the comedian troupe Groundlings and met an actress of striking appearance, Melissa McCarthy. They appeared in The Drew Carey Show; later, they continued to collaborate at Saturday Night Live.

Kristen Wiig debuted in the 2004 melodrama I’m With Her. Later on, the romcom Knocked Up, the family movie Unaccompanied Minors, the comedy The Brothers Solomon, the melodrama Meet Bill, and the mysterious project Ghost Town followed.

In 2010, Wiig participated in the crime comedy Date Night. A couple pretends to be someone else to get a table at a restaurant; they are mistaken for the mafia.

Gradually, Kristen Wiig was becoming popular. 2011 brought a breakthrough: the comedy Bridesmaids. By the way, the actress wrote a script for this project. Both critics and ordinary people appreciated the story about a group of young women who have a rest before one of them marries. Since that time, the actress has been the regular nominee for Emmy, Golden Globe, and the Academy Award.

Kristen continued to work hard and appeared in the fantastic comedy Paul, ironic detective Revenge for Jolly!, the melodrama Hateship Loveship, the comedy Friends with Kids, and emotional adventure movie The Secret Life of Walter Mitty.

In 2014, the artist gained the lead role in the tragicomedy The Skeleton Twins. It is a story about a brother and a sister who have not communicated for a decade. However, when they both have a near-death experience, they decide to change their lives: the twins try to restore the family ties.

In 2015, the actress played in The Diary of a Teenage Girl. The same year, Kristen participated in the much-spoken-about sci-fi movie The Martian: she played the director of media relations for NASA Annie Montrose.

In 2005, Kristen Wiig married the actor Hayes Hargrove whom she had been dating for a long time. However, they divorced four years later.

After the break-up, the actress announced she was not going to marry officially again. Indeed, she was seeing the scriptwriter and director Brian Petsos and the drummer of The Strokes Fabrizio Moretti, she stayed away from the legal obligations.

Kristen Wiig promotes vegetarianism; she is a member of an organization protecting animal rights. The media included the woman in the PETA's Sexiest Vegetarian Celebrities list. Although Wiig is an active social activist, she has no accounts in social networks: the artist prefers to back up her position with real actions, not photos and likes.

Kristen’s appearance is notable and original. However, she is mixed with other celebrities sometimes: the Hollywood actress Jennifer Aniston and the Russian actress Ekaterina Klimova.

2016 was marked with the remake of the popular fantasy comedy Ghostbusters: in the new movie, the main characters are courageous women. Wiig played one of them. The movie is full of references to the original: there are also four protagonists, their costumes are of similar colors and design, and monsters from the first movies appear in the new project. Nevertheless, the creators of the movie presented it as the independent work with its plot and development. The story is set in the present days full of new gadgets and relevant jokes.

Critics’ reviews were mixed. Some fans accused the movie makers of disrespect for the original, but others were fascinated and marked that four women perfectly fit in the “men’s” genre. The box office was only twice as large as the movie budget. People were talking about the financial failure caused by the quality of the story. As it turned out, the movie was not released in some countries due to political reasons; Ghostbusters could have collected more money.

In 2016, the actress also starred in the comedy Zoolander 2; she played Alexanya Atoz. This story is about a series of murders with celebrity victims. To stop the crimes, the police asks the unpopular model Derek Zoolander (Ben Stiller) for help; thus, he has a chance to come back to a runway.

The same year, the comedy action movie Masterminds came out; Zach Galifianakis and Kristen Wiig played a former bank clerk and his lover who rob a cash-in-transit vehicle and get $17 million. However, due to their lack of experience, they leave much evidence behind.

In addition, Kristen Wiig voiced Brenda in the 18+ animated movie Sausage Party. It is a naughty comedy with humanized products.

2017 brought Wiig the role of a messenger in the drama horror Mother! The project is full of allegoric images. It is a movie about a young couple whose feelings are being tested as the story goes on. 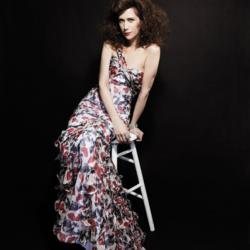