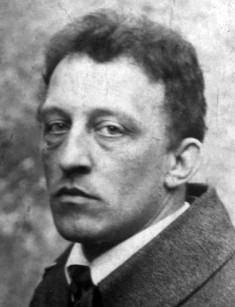 The mother of the would-be poet married his father at the age of 18. Soon after the boy was born, she made a decision to break all connections with the husband she did not love. Soon, the poet’s parents did not communicate with each other.

In those times, divorces were rare and disapproved by the society. However, in 1889, self-reliant and goal-oriented Aleksandra Blok managed to have her marriage to Aleksandr Lvovich annulled officially by the Most Holy Synod. Soon after that, the daughter of the famous Russian botanist married again – it was a love-match, the Guard officer Kublitsky-Piottukh. Aleksandra Andreevna decided not to change the son’s surname for her own or the complex one of his stepfather, and the future poet was called Blok.

Sasha spent his childhood in his grandfather’s house. In summer, he would go to Shakhmatovo for a long time. Through all his life, the poet cherished his memories about the time he spent there. Aleksandr Blok lived with his mother and her new husband in the suburban Saint Petersburg.

There was a special spiritual connection between the future poet and his mother. It was Aleksandra Andreevna who introduced the works of Baudelaire, Polonsky, Verlaine, Fet, and other famous poets to Sasha. The mother and her young son learned new waves in philosophy and poetry and had enthusiastic conversations about the latest political and cultural news. Later, it was the mother whom Aleksandr Blok would read his works; it was the mother where Blok sought consolation, understanding, and support.

In 1889, the boy went to Vvedenskaya public school. Later, when Sasha turned 16, his mother and he went abroad and spent some time in the town Bad Nauheim, the popular German resort of that epoch. Despite his young age, Blok fell in love with Ksenia Sadovskaya who was 37 at that moment. Apparently, the relationship between the teenager and the adult woman was impossible. Still, the charming image of Ksenia printed in Blok’s memory and became the source of inspiration for Blok as he was writing many of his works.

In 1898, Aleksandr finished the school and passed the entrance exams in Petersburg University successfully – he chose legal studies as a career. However, three years later, he transferred to the Historical and Philological Department, the Slavic-Russian course. The poet graduated from the university in 1906. During his studies, Blok met Aleksey Remizov and Sergey Gorodetsky and made friends with Sergey Solovyov who was his half cousin.

The beginning of artwork

The family, especially the maternal line, was cultured which could not but influence Aleksandr. Since the early age, he passionately read numerous books; he was fond of theater and even took up theater classes in Saint Petersburg; he also tried himself in writing poetry. The first simplistic works were written by the boy at 5. As a teenager, together with his brothers, he was enthusiastically creating the hand-written magazine.

In the early 1900s, the marriage to Lyubov Mendeleeva, who was the famous Russian scientist Dmitry Mendeleev’s daughter, was a significant event in Aleksandr Aleksandrovich’s life. The relationship between the young spouses was complicated and peculiar but full of love and passion. Lyubov Dmintrievna also became the source of inspiration for the poet and the prototype of the characters in some works by Blok.

Blok’s real art career began in 1900-1901. At that time, Aleksandr Aleksandrovich became a faithful admirer of Afanasy Fet’s works, Vladimir Solovyov’s lyric poetry, and even Plato’s teachings. Besides, the fate put him in touch with Dmitry Merezhkovsky and Zinaida Gippius. In their magazine “Novy Put’” (The New Way”), Blok took his first steps as a poet and literary critic.

At the early stage of his artistic development, Aleksandr Aleksandrovich realized that symbolism as a literary movement was close to his heart. This movement pierced all culture; it was notable for its innovation, urge to experiment, love of mystics, and understatement. In Saint Petersburg, Merezhkovsky and Gippius were spiritually close to Blok; in Moscow, it was Valery Bryusov. It is peculiar that, as Blok was published in the Petersburg “Novy Put’,” the Moscow almanac “Severnye Tsvety” (“North Flowers”) also started publishing his works.

Organized in Moscow, the club of Vladimir Solovyov’s young admirers and followers had a special meaning for Aleksandr Blok. The role of the club leader was taken by Andrei Bely who was a beginning writer and poet at that time. Andrei became Aleksandr Aleksandrovich’s close friend, and the club members were among his most devoted and enthusiastic fans.

In 1903, in the almanac “Severnye Tsvety,” the collection of Blok’s works “Verses about the Beautiful Lady” was published. At that time, three poems of the young poet were included in the collection of the works by the Imperial Saint Petersburg University alumni. In his first famous collection, Blok represents a woman as a natural source of light and purity and raises the question how a true love brings a single person and the world’s whole together.

For Aleksandr Aleksandrovich, the events of the revolution became the personification of the elemental, anarchistic nature of existence and influenced his art opinions to a large extent. The Beautiful Lady was replaced by the images of a snowstorm and wandering, brave and ambiguous Faina, the Mask of Snow, and the Stranger. Love poetry receded into the background.

At this time, the poet was engaged in plays and theater interaction. The first play created by Aleksandr Aleksandrovich was “The Fairground Booth” – it was staged by Vsevolod Meyerhold at Komissarzhevskaya Theatre in 1906.

Blok, who worshipped his wife, did not reject the opportunity to have tender feelings for other women, fell in love with the Komissarzhevskaya Theatre actress Natalia Volokhova. The figure of the beauty Volokhova filled Blok’s philosophical lyric poetry: the poet devoted his collection “Faina” and the book “The Snow Mask” to her. She was also used as the model for the female characters of the plays “The Song of Fate” and “The King on the Square.”

In the late 1900s, the problem of ordinary people and intelligentsia interaction in the Russian society became the main topic of Blok’s works. In the poems of that period, one can trace the bright crisis of individualism and the attempts to determine the place of a creator in the real-world conditions. With all that said, Aleksandr Aleksandrovich associated his Motherland with the image of his beloved wife, so that his patriotic poems were colored with the unique, deeply personal individualism.

1909 was a very difficult year for Aleksandr Blok: his father, the relationship with whom was quite warm, passed away, and the poet and his wife Lubov’s newly-born child died. However, the substantial estate that Aleksander Blok Sr left his son gave the poet the opportunity to forget about financial ordeals and concentrate on large art projects.

In the same year, the poet visited Italy, and the foreign atmosphere made him reconsider his values. The collection “Italian Verses” and prosaic essays from the book “Lightning Flashes of Art” described this internal struggle. In the end, Blok came to a conclusion that symbolism was the school with rigid rules that outlived itself for him, and he needed self-absorption and “spiritual diet.”

Having focused on large literary works, Aleksandr Aleksandrovich gradually reduced the time he spent on publicist works and going out to various events as it was typical of the poetic bohemia of those times.

In 1910, the author began to create the epic poem “Requital” – however, he was not meant to have it finished. In 1912-1913, he wrote a famous play “The Rose and the Cross.” In 1911, having taken his poetry books as the basis, Blok created his collected works issued in three volumes – later, it was republished several times.

Aleksandr Blok did not express the negative attitude toward the Soviet administration as other poets of the Silver Age of Russian Poetry. While Anna Akhmatova, Mikhail Prishvin, Zinaida Gippius, Yuly Aykhenvald, Dmitry Merezhkovsky, and many others criticized the Bolsheviks, Blok agreed to cooperate with the new state authorities.

The name of the well-known poet was actively used by the administration to reach its goals. Besides, Aleksandr Aleksandrovich was often given uninteresting positions in various commissions and organizations.

At that period, the verse “The Scythians” and the famous poem “Twelve” were created. The latter figure in “Twelve” – Jesus Christ who became the leader of 12 soldiers – provoked an outcry in the literary world. Although this work is now considered to be the best piece of the silver-age writing, the majority of Blok’s contemporaries expressed extremely negative opinions about the poem, especially the image of Jesus.

Lubov Mendeleeva was the first and only wife of Blok. He was crazily in love with her and believed she was his destined one. The wife became the supporter and the permanent muse of the poet.

However, the poet’s view on marriage was specific. First of all, he was against physical love and praised spiritual love. Until his last days, it was acceptable for Blok to fall in love with other women, although they did not mean as much for him as his wife. However, Lubov Mendeleeva also got attracted by other men.

Unfortunately, the couple had no children: the child that was born was too weak and did not survive. Still, Blok had many relatives in Russia and Europe.

After the October revolution, Aleksandr Aleksandrovich’s life was not filled with only interesting events. Busy with excessive duties and responsibilities, not belonging to himself, he got sick. Blok had asthma, cardiovascular disease, and mental disorders. In 1920, the author had scurvy.

Exhausted by need and numerous diseases, he passed away on August 7, 1921, in his apartment in Saint Petersburg. The cause of death was cardiac valve inflammation. The funeral and burial service was conducted by the archpriest Alexey Zapadalov. Blok’s grave is situated in the Smolensky Orthodox Cemetry.

Not long before his death, the writer tried to gain permission to go abroad for treatment, but he was not allowed to do so. Rumors had it that Blok destroyed all his notes in his right mind and would not take medicine or food. For a long time, there were also rumors that Aleksandr Aleksandrovich lost his mind and became delirious whether all copies of his poem “Twelve” had been destroyed. Still, there was no evidence of that.

Aleksander Blok is rightfully considered the genius of the Russian poetry. Both his large works and short poems (“Factory,” “Night, street, street-light, drugstore,” “In a Restaurant,” “Shabby Hut,” and others) became a valuable part of the Russian cultural heritage. 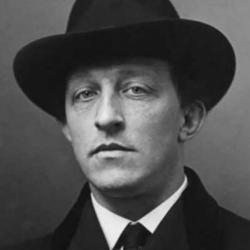