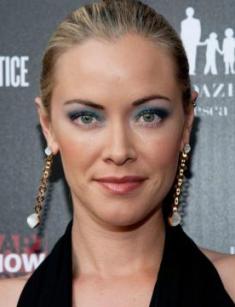 The fantastic actions Terminator 3: Rise of the Machines and Ring of the Nibelungs made this Hollywood actress incredibly popular in her home country and abroad. However, not many people know that Kristanna Loken had a splendid modeling career; if she had chosen this way, Hollywood would miss one of its stars.

The would-be artist was born in fall 1979 in Ghent, New York. The Norwegian ancestry gave her beauty: her grandparents migrated to the United States. Kristanna grew up in a family of farmers, but the atmosphere was artistic: the father, Merlin Loken, created the novels Come Monday Morning’ and The Boy Next Door and proved to be a good playwright and screenwriter. The mother, Rande Porath, was a former model who quit her career after the daughters Tanya and Kristanna were born.

Both sisters took their first steps in modeling when they were teenagers, but they also inherited their father’s love of drama. The future celebrity was fond of other arts: singing, dancing, photography, and horse-riding.

13-year-old Kristanna and her elder sister Tanya fled to Manhattan. Today, Tanya is known as a lesbian.

At the age of 15, Loken shone as a model: in 1994, she won the third place at the beauty pageant organized by Elite Look on Ibiza. The same period was marked with the cinematographic debut: Kristanna followed her sister’s example and preferred to build a movie career.

In the mid-1990s, the beginning actress was given a role in the popular TV series As the World Turns broadcast from 1956 to 2010. The project became Loken’s trademark: many small offers in comedies followed, and the actress looked good on the screen.

In 1997, the creators of the famous series Pensacola: Wings of Gold invited Kristanna to the project; she participated there for a year and collaborated with many stars. The next shows were beneficial as well: Mortal Kombat: Conquest, Gangland, Philly, and Air Panic. By the way, the latter was named a prophetic movie later: some moments paradoxically reminded the tragic events of September 11 that took place several months later after the premiere.

The real fame came with the 2003 action Terminator 3: Rise of the Machines starring Arnold Schwarzenegger. Kristanna Loken became a new Hollywood celebrity. She took the part of the TX machine seriously and had pantomime classes to prepare for the project; besides, the actress underwent a combat course in the Israeli army. In 2017, the costume of Т-Х in Terminator 3 was auctioned in London.

The next year, one could see Loken in the German movie Ring of the Nibelungs; the role of Brunhild was successful as well.

In 2005, the movie BloodRayne based on a computer game was presented. Kristanna’s character was the Dhampir Rayne, born of a human mother and vampire father. Despite six nominations for the Golden Raspberry, the artist’s career was not hurt. The cold reception did not prevent sequels from being released in 2007 and 2010, but another Norwegian actress, Natassia Malthe, was given the role of Rayne.

In 2007, Loken worked on two series simultaneously: Painkiller Jane and The L Word. S.W.A.T.: Firefight was another project of the period.

In 2014, the actress starred in the action Mercenaries – the mockbuster of The Expendables 3; critics’ reception was negative. The infamous Russian actor Alexander Nevsky invited Kristanna to play the female lead in his movie Black Rose. The action failed eventually and provoked many unfavorable reviews on IMDb.

In 2016, the woman joined the cast of the TV series Lethal Weapon.

The actress complained in one of her interviews that relationships with men became more complicated as long as her popularity increased: they were afraid even to talk to her.

Kristanna’s personal life has often been the object of the audience’s interest; some news was scandalous.

The first romance discussed in tabloids happened with the web-designer Derek Grout. Interestingly, the couple met when they were children: the Grouts were the Lokens’ neighbors. At some point, the young people reunited and felt attracted to each other; they started living in the actress’s house in a suburban area of New York but split up eventually.

In 2005, everybody was talking about Kristanna’s bisexuality: she confessed in her interview she had an affair with Michelle Rodriguez. In her turn, Rodriguez did not confirm it. Further on, Loken mentioned she had romances with men and women; the latter were more sensitive and tenderer. Fans viewed this declaration a coming-out.

The scandal went down in 2008 when the actress married her colleague Noah Danby. The artist met her future husband at the movie set of Painkiller Jane; they spent a year together. Following the divorce, Loken dated some unknown woman; the name was never revealed.

2015 was marked with the relationship with Antonio Villaraigosa, the politician and former mayor of Los Angeles.

In May 2016, the model gave birth to the son Thor. Many sources wrote that Antonio was the baby’s father, but the new boyfriend’s identity was revealed soon: the actor Jonathan Bates. Today, the celebrity often shares pictures with Bates: apparently, they are dating and bringing up their child.

The actress has been fond of magic and voodoo; her tattoos confirm that. Sometimes, the beauty frightens people by her black humor and rude laugh. Rumors have it Kristanna used to collect bones and skulls and even tasted human blood; the actress’s claims about irrelevance of moral norms for her only ignite such speculations.

Loken used to be interested in Buddhism. She is proud of her achievement: 300 km. of riding in a hot desert in Namibia.

Similar to many celebrities, Loken has an Instagram account and shares personal photos and work-related moments there.

Today, the artist continues to participate in various projects. Fans will see their favorite in University Intelligence, Repeater, Demo, and Dark Stories soon.

Kristanna Loken’s net worth is estimated at $8 million in 2019.