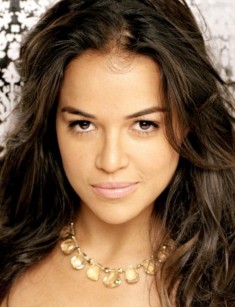 Michelle Rodriguez is an American actress. She is known to the public by her roles in the movies "Resident Evil", "Avatar" and also by her participation in the extremely successful franchize "Fast & Furious".

Mayte Michelle Rodriguez was born on the 12th of July, 1978 in the family of the Dominican and the Puerto-Rican. The parents of the future film actress met in America where Michelle's father had been at military service.

Since childhood Michelle had an independent character and was very broad-minded that was rather surprising for the child who was brought up in the religious family. The girl's grandmother was especially godfearing.

For several years the family of Rodriguez lived in Texas, but when Michelle turned was 8 years, her mother left her father and took her daughter to the Dominicana. In a year the parents of the future star officially divorced. Michelle’s grandmother got engaged in education and upbringing of her granddaughter and she repeatedly tried to involve the girl in the beliefs of Jehovah's Witnesses but it was in vain. During four years Michelle Rodriguez had been living in the native country of her mother and then they came back to the United States and settled in New Jersey.

Michelle often changed schools, she studied badly and misbehaved. In 17 years the girl left school, but soon she came to her senses and got the high school certificate. At this time Rodriguez already dreamed about the career in the cinema, but she couldn't choose the specialization. At first Rodriguez wanted to be a scriptwriter, then she decided to become the director, but as a result, she stopped on the actor's profession.

Being 20 years old Michelle Rodriguez moved to New York. At first, the movie actress took part in extras and actively visited auditions. In 1999 Michelle played two roles in the movies "Cradle Will Rock" and "Summer of Sam". The audience hadn't even noticed the young actress. Such indifference pushed and motivated Michelle, but soon the destiny rewarded Rodriguez for her persistence. Once the actress had seen the announcement of the audition for of actors for the movie "Girlfight". Rodriguez was late for the audition, was reading the text stumbling, but the beginning actress managed to enchant the director by some miracle. She was selected for this role from other 350 applicants. In such a way the creative career of Michelle Rodriguez had begun.

The debutant had to take up boxing and practice it for three months so that she could look natural in the movie. The girl had coped with it perfectly. After the premiere of the movie "Girlfight," the public began to talk about Michelle.

In 2001 Michelle took part in the movie "3 AM", then she played a role in the picture "Fast & Furious". In a year she began to shoot in the horror movie "Resident Evil" and in the youth picture "Blue Crush". The actress embodied in the movies an image similar to her – a sexy girl ready to stand for herself.

In 2003 the actress played in the action movie "S.W.A.T.", in 2004 Rodriguez finished her shootings in the movie "Control" and at once began to work in the series "Lost".

Every year Michelle Rodriguez pleased her admirers with new works in the movies. The fighter of "BloodRayne" in which Michelle played one of the leading roles got 6 nominations in the Golden Raspberry Awards. At the same time, neither critics nor the audience questioned the acting talent of Rodriguez.

In 2009 Michelle was invited to take part in the prestigious and costly project "Avatar". The plot of the picture was based upon the struggle of the mankind against aliens. Rodriguez expected that after the premiere the whole world would start to talk about her. Really, the movie "Avatar" had met the expectations of the creative group – the box office of the movie reached the level of the Oscar-winning picture "Titanic".

While the audience was watching the interplanetary peripetias, the actress was shooting in the pictures "Fast & Furious 4" and "Machete".

In 2013 the admirers of the American actress got really disturbed and were alarmed. Michelle Rodriguez admitted in the interview that she was going to take a break in her acting career to be engaged in the literary activity.

The movie actress told the press that she had come to show business to become a writer, but got to the movie industry. As Rodriguez admitted, she was going to lodge in the mountains to realize her goal, to find the source of inspiration for her novel. Nevertheless, several years have passed after this statement, and Michelle continues to please TV spectators with her acting on the shooting stage.

Personal life of Michelle Rodriguez is extremely active and passionate – messages about new love affairs of the Hollywood celebrity regularly appear in the society news. The first boyfriend of Michelle was a Muslim and demanded respect for Islam from the actress and wanted her to observe the religious rules. In 2000 the couple broke up.

In 2001 Michel Rodriguez and Vin Diesel got acquainted on the movie set of shootings of "Fast & Furious". A short love story began between them. Soon the paparazzi had taken a photo of the actress in a company of Olivier Martinez who at that time was in relations with the Australian singer Kylie Minogue. In the pictures, Michelle was passionately kissing the singer's boyfriend.

In 2005 the actor's beau monde discussed Michelle Rodriguez's bisexuality, but the movie actress herself told in the interview to the representatives of Mass Media that she wasn't a lesbian. This happened because of the frank interview of the American model Kristanna Loken in which the girl said that she had been in an intimate relationship with Michelle. Then the actress hadn't commented on the words of her girlfriend in any way, but in a year she admitted that she had experimented with the partners of both sexes. Michelle’s followers on Instagram at once demanded from the actress to show the photo where she was naked in the company of another woman.

In 2008 the journalists again noticed Michelle in the company of Olivier Martinez. The couple had dinner at the hotel’s restaurant in Los Angeles in which the actor had stayed. The journalists claimed that they had seen how Rodriguez was leaving the hotel in the morning.

In winter of 2014 the actress was in relations with the British model Cara Delevingne, but soon they separated. After that, she had relations with Zac Efron.

Michelle Rodriguez sometimes appears with a wedding ring on her finger. It’s a mystery who has presented it to her. The actress says that this ring reminds her of sufferings which she doesn’t want to feel anymore because of love.

The appearance of the actress (Michelle's height is 165 cm and her weight is 55 kg) allows her to participate in the photoshoots for world magazines. In 2009 Michelle appeared on pages of the January edition of the Maxim magazine. The representatives of "Maxim" magazine invited the movie actress to take part in the shooting, as in 2009 the girl had played in the movie "Avatar" which became one of the most successful projects of James Cameron.

In 2016 the movie "Assignment, The" came on the screen. Walter Hill who had produced the movie "Alien" became a co-producer and the co-author of the script of the transgender thriller, and Giorgio Moroder became the composer. Except for Michelle Rodriguez, Sigourney Weaver, Tony Shalhoub, Kathleen Gerard, and Terry Chen took part in this movie.

Michelle plays the role of the elite killer Frankie Kitchen who entered the conflict with the gangsters and after a number of scrapes gets into the hands of the maniac surgeon Rachael Kay (this role was performed by Sigourney Weaver) with the ominous nickname - "the Doctor". The specific physician changes the sex of Frankie and transfers him into a woman. The critics noted excellent impersonating, as it’s really hard to represent such a character on the shooting stage.

This role is compared by experts with the movie "Alita: Battle Angel" where Michelle had played the role of the cyborg Geldu. It is interesting that the shootings of this movie had begun long ago, but the members of the mass media managed to find out that the actress had got a role in this movie only sometime later. Till the last moment participation of Michelle Rodriguez in this picture was kept in secret. Today the users try to guess what was the reason for such secrecy.

The picture narrates the future where the female cyborg becomes a soldier hunter who tracks down and kills criminals. In the context of epic adventures, the movie is aimed to show the process of self-discovery and search of the love of the young woman.

In 2017 the movie "The Fate of the Furious" was released. Michelle is the old-timer of "The Fast and the Furious". The actress participates in the project since 2001. For 16 years this franchize which movies have transformed from the action movies about the entertainments of illegal street racers to the global pictures featuring a number of stars with special effects and stunts, action shows, has become extremely successful.

The new part of the movie hasn't disappointed the fans. In this picture, there is a great number of crazy and impressing episodes which are full of pursuits and firefights, fights and jokes. Some of these scenes are the most exciting and crazy in the history of the franchize. The actress notes that she considers the 8th part of " The Fast and the Furious " the most gloomy of all the parts which had been shown on the screen.

By the words of Rodriguez, the process of the shootings was very interesting, and they were laughing all the time on the movie set because Dwayne Johnson and Jason Statham just couldn’t help joking and amused all the people who were present there.

In the movie, the characters embodied by Johnson and Statham also have interesting dynamics: Luke Hobbs (the role was played by Dwayne Johnson) gets to the strict-regime colony, and Deckard Shaw (Jason Statham) endures a certain transformation, which in a way has something in common with the subject line of Vin Diesel.

The actress is often called the woman who conquers the man's world, breaks the artificial space created by the representatives of the strong half of the mankind. Michelle considers such success a merit of all women of the planet, and Hollywood is a real proof to this.

"In this sense, Hollywood reflects the public processes happening in the world. For a long time, we have lived in the world which the men have made comfortable for themselves until one of us has decided that life is given only once and it’s necessary to try to change the situation radically. Initially, there weren't many of us, but today women are leaders in all spheres — from the policy to business. Hollywood cinematography just fixes that the world no longer belongs to the men only", – Michelle Rodriguez has said. 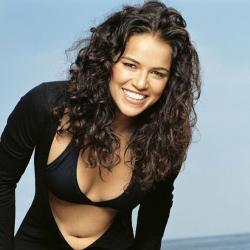