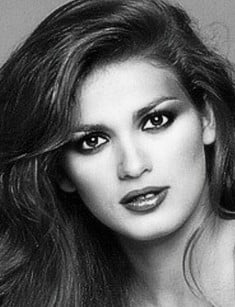 Gia Carangi was one of the first supermodels who conquered the world of fashion and thousand people’s hearts. Throughout her short life, the young woman experienced a lot. Her biography is the story of the breathtaking rise and equally dramatic fall; it is the flashes of photo cameras, glossy magazine covers, and the abyss of drugs intake.

Gia Marie Carangi was born not far from Philadelphia on January 29, 1960. The girl’s mother Kathleen Carangi had Irish and Welsh roots while the father Joseph was of the Italian origin. Perhaps, it was the ethnic intermingling that gave Gia her delicate features arresting people’s attention from the first sight. The would-be model’s father owned a small chain of restaurants; the mother looked after the children, Gia and her brother Michael.

Gia’s family broke up when the girl was 11: the mother left, and the father had to take care of the children. The parents’ divorce was a severe blow for the future star: the girl suffered from the lack of the mother’s attention. This childhood experience might have caused Gia’s interest in women as she grew older: friendly relations with girls gradually turned into something more significant.

At high school, Gia began to hang out with the guys who were David Bowie’s fans. The teenagers copied his style of dress, behavior, and even bisexuality. At that time, Carangi wore baggy clothes and enjoyed it when people thought she was an adolescent boy. The company of friends frequented gay clubs. Gia started considering herself to be gay. As soon as the girl turned 17, she moved to New York and began her way to the modeling business pinnacle of success.

In New York, Gia met Wilhelmina Cooper who used to be a model and had her own modeling agency at that time. The beginning model was invited for photo sessions: the first offers were minor, but soon Gia was recognized as a model. The young woman’s fascinating ability to represent any image, from a rocking chick to a naïve simpleton, made her even more attractive in her employees’ eyes.

Gia’s career was developing rapidly, and many famous designers and photographers dreamed of working with her. Gia Carangi’s photos appeared on magazine covers and advertisement handouts. In 1978, the young woman was offered a nude photo session. The photographer Chris von Wangenheim predicted these photos would become scandalous and famous. Gia accepted this ambitious proposal and proved she was ready to work on any image and transform. Sandy Linter worked as a makeup artist in this photo session.

The photos were excellent. Soon, the pictures of naked Carangi standing at the fence provoked a public outcry and became the turning point of the modeling business developing. Next year, in 1979, Gia posed for the cover of the British, French, and American Vogue and the American Cosmopolitan. The “Cosmo” photos where the young woman was wearing a yellow swimsuit were later called her best works.

When Gia Carangi gained glory and popularity, she started accepting only those offers that seemed interesting to her. Moreover, she was often stubborn and refused to work if she did not like her clothes, makeup, or hairstyle.

Although Gia’s brilliant career had just started, everything was over soon.

The young woman often went to New York bars and clubs after work. These places were known for their loose morals and accessible drugs. Initially, the model tried cocaine that seemed just a little naughty trick to her; in 1980, when her friend and mentor Wilhelmina Cooper passed away, she switched to heroin. Gia wanted to divert her attention from mourning, and heroin was effective like nothing else.

The “harmless” trick soon led to dire consequences: it was more and more difficult for Gia Carangi to work. The model was often late for photo sessions or even forgot about them. Naturally, her employees did not like that and stopped signing agreements with Gia. In 1982, the model tried to come back to the world of fashion. She changed several agencies but failed. In 1983, the woman was caught red-handed as she was doing drugs during the photo session. Her model career was broken once and for all.

Despite Gia Carangi’s richness, beauty, and popularity, her personal life was unhappy. The makeup artist Sandy Linter and modeling business colleagues Julie Foster and Janice Dickinson. Rumors had it that these women were Gia’s lovers: the model did not keep secret she was gay.

Gia’s longing for female partners and attempts to forget herself in the drug exhilaration were probably caused by mother’s absence in the girl’s childhood.

“The biggest mistake we made was that nobody went up there with her,” Gia’s brother Michael admitted in one of the interviews.

“She was looking for anyone’s love, she would show up at my house sometimes in the middle of the night, and I’d let her in, and she just wanted someone to hug her.”

In a while, Gia Carangi’s drug dependency was known by everyone. As soon as several agencies refused to work with her, the model started self-destructing. She spent much money on drugs, and a new dose was all she could think of. The woman was leaving the real world.

The model’s friends and relatives tried to save Gia. The woman was even taking a rehabilitation course in a Philadelphia clinic, and the situation did not seem very bad. However, as soon as Gia left the clinic, she got engaged in the bad company again. The model was arrested for drunk driving; she also was stealing money from her mother to buy a new dose. In 1981, Gia tried to undergo the drug abuse treatment but the news about her friend Chris von Wangenheim’s death knocked the woman down and gave her the impulse to go back to the drug semiconsciousness.

"I told my ex-husband that he should be prepared for any news because she was capable of anything. People in that situation will do anything for drugs — hook, steal. I’ve had people tell me they’ve seen what amount to smoker fiIms of Gia. I just tried to prepare myself. I knew that any day I could get a call and she’d be dead.”

In 1984, Gia made her last attempt to come back to normal. Under her friends and family’s pressure, the woman had a 6-months treatment in a clinic. By that time, the model had spent everything and lived on the state welfare. After the treatment, Gia seemed to have recovered, got a job in a supermarket, and even applied for college courses. Still, the former model’s willpower lasted only three months – later, Gia disappeared and probably returned to her drug-abusing friends.

In 1986, Gia Carangi was taken to a hospital with suspected pneumonia. By that time, Gia’s skin was covered with ulcers, scars, and injection marks. Later, Carangi was released from the hospital but she had to return there the next month – again, she had pneumonia. It was necessary to look for the cause of the illness. The truth was terrible: Gia was diagnosed with AIDS, and the horrible disease was devouring the woman from the inside; after the diagnosis was made, Gia lived only six months.

Gia’s condition was deteriorating fast. The painful truth is that the woman received what she urged for only when she was dying – her mother Kathleen Carangi gave the daughter her attention, looked after her, and was by her side until the end. One month before Gia Carangi died, she was transferred to a hospital isolation ward. On November 18, 1986, the woman passed away. Gia Carangi’s death was unexpected for many people: the mother did everything to hide the model’s disease and drug dependency.

The funeral took place three days later. Gia was buried in a closed casket since the disease had disfigured her face and body badly. Only the closest people were present at the ceremony: at those times, an AIDS-related death implied shame and dishonor.

Some years later, the movie “Gia” was released: the story of the talented woman whose life was broken so absurdly was told honestly and tragically. Angelina Jolie played the major role; the actress confessed her biography was too similar to her own. The movie pictured Gia and Linda’s relationship; Linda represented Gia’s friend Sandy Linter. The quote from Gia Carangi’s unpublished diary finishes the movie:

“Life and death, energy and peace. If I stop today, it was still worth it. Even the terrible mistakes that I made and would have unmade if I could. The pains that have burned me and scarred my soul, it was worth it, for having been allowed to walk where I've walked, which was to hell on earth, heaven on earth…” 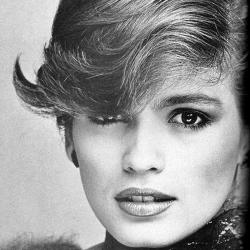