Janice Dickinson is Calvin Klein and Versace’s Muse, a troublemaker, who has been disputably described by herself as the first supermodel, the "witch" of the modeling business. The top model was at the peak of glory in the 1980s, but any news about Janice is still published on the first pages of editions.

Janice Doreen is the second of three daughters of nurse Jennie Marie and soldier Ray Dickinson. She was born in Brooklyn and grew up in Florida. The girl and her sisters Debbie and Alexis had a hard time as children. Violence and alcoholism flourished in the family. Janice desired to escape from this atmosphere, to prove to others that she could do better. Thus, she could get on the runway and become famous.

Pursuing her dream, the girl won the local beauty contest. The inspired girl went to auditions, but she was turned down several times by modeling agents because they needed blue-eyed blondes, but Dickinson was a bright brown-eyed brunette.

Actress and model Lorraine Bracco helped the model to get to the top. She introduced the "non-standard" girl to the director of the French edition of Vogue. The magazine published Janice’s photos on its cover 37 times.

Janice Dickinson returned from Europe as a star with a thick portfolio under her arm. Harper's Bazaar, Sports Illustrated, Elle, Cosmopolitan and other fashion magazines suddenly wanted to see a beautiful lady with amazing bends of the body on their spreads.

The supermodel walked the runway wearing Valentino and Azzedine Alaïa dresses, became the face of Max Factor and Revlon. Linda Evangelista is not the first to say:

One more American celebrity gave such an ultimatum to designers and the press, demanding for her participation $20,000 when the standard sum was $ 5 thousand. Dickinson is Aquarius, and she likes to stand out from the crowd with uniqueness and independent decision-making. The top model’s fees covered any expenses.

The girl frequented the infamous club known as Studio 54, where visitors could safely chill out. Janice followed the first photographer’s advice to live for the moment and let loose. Alcohol, drugs, scandalous sex were normal in her life. During one of the fashion shows, drunk Dickinson walked off a runway and landed in Sophia Loren's lap.

Such a crazy lifestyle soon ended. The world found out about the horrors of AIDS, and in 1984, Dickinson's close friend Gia Carangi died at the age of 26. Janice had a run of bad luck. To steady her nerves, the beautiful woman left for Italy. When she returned in two years, the supermodel saw that new faces appeared on the fashion shows. Young models outperformed her even without makeup.

At the same time, the model became acquainted with the world of cinematography. She mostly made a cameo appearance in the series Charmed, Buddy Faro, and others.

In the mid-2000s, Dickinson had the second surge of popularity. It happened when the star, who left the modeling business, returned as a judge on the reality television series America's Next Top Model.

The idea to create the series belonged to her colleague and a former supermodel, Tyra Banks. Joint work did not prevent women from quarreling. Janice called Tyra "heartless, soulless and cold" because the latter was against super skinny models.

In 2006, the celebrity established her modeling agency and starred in her reality show, The Janice Dickinson Modeling Agency. The students had a tough time, listening to the harsh, sometimes rude remarks of the famous mentor.

The beautiful, uninhibited, sharp-tongued, woman, who is always ready for inseparable fun, cannot be alone. Many Hollywood stars, musicians, politicians, including Roman Polanski and Bruce Willis, Mick Jagger and Warren Beatty fell at her feet. The celebrity married Ron Levy at age 22 and divorced at 24. The model married Sylvester Stallone when the actor as a gentleman wanted to marry the mother of his unborn child. However, the DNA test did not confirm his paternity.

The father of the daughter, Savannah, born in 1994, was Michael Birnbaum. Janice met him when she was married to producer Simon Fields. He became famous and wealthy on everything connected with the Ninja Turtles. According to Dickinson, the main "project" of the creative couple was the son, Nathan. His mother now calls him the most intelligent man in life.

There were love and drugs in the third marriage with Alan B. Gersten. Being high on drugs, the man got into a car accident, almost killing the whole family. The model filed for divorce as soon as she was discharged from the hospital.

Janice frankly told in the autobiography that she dated not only men. She had love affairs with model Gia Carangi, who died of drug overdose, Steven Seagal's former wife Kelly LeBrock, singer, and Dolph Lundgren’s girlfriend, Grace Jones.

In 2016, the former model married once again. Dickinson husband was a psychologist, Dr. Robert Gerner. Her close friend and Robert’s son had introduced the woman to him four years before. The son became the father's best man at the wedding, and the daughter, Savannah, was the bridesmaid.

They delayed celebration for a long time. One of the reasons was Janice's disease. In 2015, the former model said in an interview with The Daily Mail that she was diagnosed with breast cancer. Her husband is nine years older than Janice. Mature Dickinson is the mother of two adult children, but she as usual ignored other people’s opinion and wore a white dress and veil at the wedding.

Janice has never kept secret that when she turned 30 years old, she began to use the service of cosmeticians and plastic surgeons. Even if the top model has the same fitness (her weight is 64 kg with the height of 178 cm), but she cannot but correct her appearance. She has had not only facial plastic surgery but also improved other parts of the body.

Janice filmed the last breast surgery for TV. The doctor said that Dickinson did only harm to her breast, and he had never met such a problematic person before.

Dickinson claims that she will undergo plastic surgery in the future. Healthy food and long walks are not enough for her age. Gerner had plastic surgery too, saying that he wanted to look his absolute best next to the beautiful wife.

It was said that the desire to be young forever made the woman bankrupt. They say that Janice owed the bank $ 300 thousand, but the financial institution kindly reduced the debt due to the celebrity’s "age, lack of assets and income."

After recovery, Janice changed significantly and refused further surgery. The star was hardly noticed at the fashion show Pacific Design Center in Hollywood.

The people did not recognize Dickinson who looked younger and gained a little weight. The photos on Instagram with the hashtag #JaniceDickinson showed the former beauty queen with live facial expressions as if she was 20 years younger.

In the summer of 2018, the paparazzi took photos of Janice on Los Angeles beaches when she enjoyed the sun and the sea. Time hasn't been kind even to the runway goddesses, but few haters said unflattering things about Dickinson. 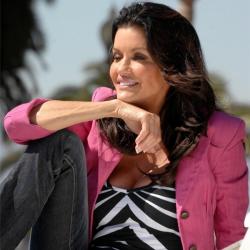