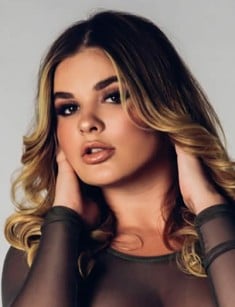 Anastasia Kvitko was born in Kaliningrad on November 25, 1994. She lived together with her parents on the fifth floor of an ordinary high-rise building. The girl went to one of the local secondary schools, liked sewing and drawing. At the same time, Anastasia does not like to recall her childhood because her rather stout body often suffered from the teasing of her classmates.

Kvitko began attending the track and field section at school, hoping to make her body more attractive. The fact that she lived on the fifth floor of the house without an elevator helped her too.

Anastasia’s appearance differed from modeling standards when the girl tried to find a job in the New Stars modeling agency and she was forced to lose weight more actively. Anastasia terminated the contract with the agency and was already ready to forget about her dream to become a model.

In 2011, famous photographer Anvar Norov found Kvitko’s photo on the social network Vkontakte. The attractive girl, whose height is 162 cm, and weight is 71 kg, with voluptuous breasts and buttocks, as well as with a thin waist made an impression on Norov. He invited Anastasia to several photo shoots to make her a good professional portfolio. Photos made by a specialist instantly spread on the Internet and made Kvitko extremely popular.

Soon the beginning model was invited to the photo shoot The Girl of the Day, which was conducted by the news page Vkurse of the social network Vkontakte. In 2013 she moved to Moscow and registered her account on Instagram, and soon got the nickname Russian Kardashian.

Moving to the USA

In 2015, the girl received a tempting offer from the Kanye West Clothing company. This brand is engaged in the production of fashionable clothes, and Kanye West is engaged in designing of many new models of this brand. It is noteworthy that his wife is Kim Kardashian, who Anastasia Kvitko is often compared to. West not only works for the benefit of its own brand, but he often cooperates with the sports brand Adidas, promoting his line of brand clothing YEEZY.

In January 2016 the gorgeous Russian girl packed up her bag and went to Miami. She started working not only for Kanye West's company but also for a number of other brands. The advertising agency, which offered her work right after her arrival, advised Anastasia to lose weight. However, Kvitko not only put up with the peculiarities of her body, but also realized that it distinguished her from most modern models, and refused to lose her magnificent ample curves categorically.

In the US, Anastasia most often advertises quite revealing underwear, fashionable clothes, as well as corsets and shaping underwear of the Colombian brand. The young model’s portfolio added a large number of photos in a swimsuit, branded suits, exclusive underwear, etc. A few months later, the model presented her solo show with the support of the Mia brand at a local nightclub Cameo.

In mid-2016, the girl moved to Los Angeles from Miami. Although her body has ensured her success as a model in the US, Latin American public especially liked Kvitko. She was even invited to the Spanish-language television show called Un Nuevo Dia, shot with a roaring success. Soon the famous American singers Pitbull and Yande invited her to appear in the video for the song “Ay mi Dios.”

At the end of 2016, Anastasia was invited to become the face of the American brand Eliya Cioccolato, and she gladly accepted the offer, presenting to the general public a cruise collection of stylish swimwear.

Maxim magazine named the girl as one of the sexiest women of modern Russia in 2016 (Vera Brezhneva and Glukoza took the first two positions).

Anastasia Kvitko has recently been accused of plastic surgery when photos before and after surgery were publishing. The model denies categorically such assumptions and claims that her body is the result of a regular sports training and a little bit of genetics.

By the way, Anastasia cannot stand the comparisons with Kim Kardashian, since she considers herself more natural and beautiful. The girl claims that from a young age she has done sports, unlike Kanye West’s wife.

In January 2017, the girl participated in the talk show Let them talk! via video conference. The presenter of the show Andrey Malakhov expressed doubts that Kvitko never underwent plastic surgery, and his doubts were supported by several celebrities at the show. However, Anna Semenovich immediately interceded for the girl.

When Anastasia lived in Kaliningrad, she had a boyfriend who admired her body and helped her to believe in herself. The girl told in an interview that they went to Moscow together, hoping to build successful careers, but their relationships could not stand the test of popularity.

There were rumors that her boyfriend was popular Russian rapper Timati, who usually dated sexual models. However, nowadays Kvitko's boyfriend is Arseny Sharov, whose girlfriends were Tanya Tereshina, Katya Lee, Alena Vodonaeva and Emilia Vishnevskaya. The paparazzi took pictures of the boyfriend when the couple was in one of the hotels in Los Angeles.

Nowadays, more than four million people follow Anastasia Kvitko’s Instagram page. There are a lot of men who admire Anastasia’s body, and girls who are interested in watching the life of the successful model and her transformations. 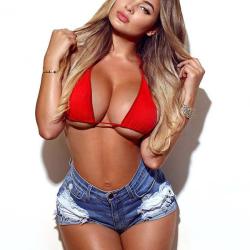