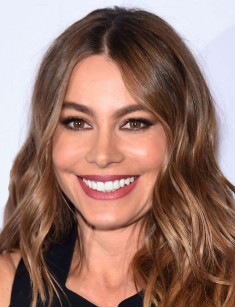 Sofía Vergara is an American-Colombian actress, model, and TV host. She rose to prominence while hosting the famous South American show, and also became famous for her role in the series Modern Family. Vergara received four Golden Globe nominations for this role. Forbes Magazine put Vergara at number 32 on the list of most powerful women for 2014.

Sofía was born in the Colombian industrial city of Barranquilla in a Catholic family. Her father Julio Enrique Vergara Robayo was a cattle rancher for the meat industry, and mother Margarita Vergara de Vergara was a homemaker. Besides Sofía, Julio and Margarita had five children.

In her youth, Vergara was discovered by a photographer while walking on a Colombian beach and was quickly presented with offers of modeling. Before she agreed, Sofía had gone to her Catholic schoolteachers to get their permission to take the assignment.

Sofía made her debut in the Pepsi commercial, which aired not only on the television channels of Colombia but also in many other South American countries.

Later, Sofía Vergara moved to the capital and continued to film in advertising. At the age of 20, she co-hosted with Fernando Fiore Fuera de Serie, an entertainment program about traveling that made her a TV star in South America, and thanks to the show the girl visited many exotic places on our planet.

Vergara was also a co-founder of the Colombian version of the variety show A Que No Te Atreves. As a model, Sofía continued to pose for calendars and to advertise women's clothing, mainly swimwear and underwear. Vergara did not hesitate to pose topless.

In 1998, Sofía Vergara decided to move to the USA after her older brother Rafael was kidnapped, and later killed.

The actress began her acting career in 1995. Sofía Vergara was more successful as an actress of television series. She played Alicia Oviedo in Amas de Casa Desesperadas, the Colombian version of the series Desperate Housewives. This role was identical to the character of Mary Alice Young in the American soap opera. In the American comedy series Dirty Sexy Money, the actress portrayed the image of an emancipated lady, who attracted the attention of the reveler and lady's man, Jeremy Darling.

In the comedy sitcom, Modern Family Sofía Vergara played the role of Gloria Delgado-Pritchett, whose husband is twice as older as she. The plot centers on family problems or everyday issues which occur in three different families.

The actress played bit parts in movies, but in 2011 she starred in the grotesque comedy The Three Stooges, where she played a fatal woman, Lydia Harter, who wrapped three not very smart simpletons around her finger. The goal of Vergara's heroine is to make the men, who do not set the Thames on fire, kill her husband. Thus, she can possess the inheritance. The film was a great success, and critics called Sofía's acting "very amusing."

In early 2014, Vergara tried her hand as a producer. Sofía was an executive producer of the television series Killer Women on ABC channel. The series, based on the Argentine plot about the woman-ranger, was a failure and ABC canceled it after the eighth episode of the first season.

In the middle of 2014, the comedy Chef premiered, where Sofía Vergara portrayed the ex-wife of the protagonist, Carl, the head chef, who lost his job after a video recording a scandal and fight with a critic spread on the Internet.

In October 2014, Sofía played the shocking role of Madame Desdemona in Roberts Rodriguez’s action exploitation film Machete Kills which is the fifth part of Grindhouse, co-directed with his colleague Quentin Tarantino. Michelle Rodriguez and Danny Trejo played the leading roles in the action movie.

In early 2015, Sofía appeared in the title role of D. D. in the thriller Wild Card with Jason Statham.

In 2015, the actress played a leading role in the action comedy film Hot Pursuit. Vergara performed the part of the pampered beautiful Daniella, the wife of a member of the Mafia, who go to the other side of the state to testify against the drug lord. A serious-minded and executive police officer (Reese Witherspoon) went to accompany Daniella. But before they left the house, the women had been under fire, and the ordinary police task turned into a death race.

In May 2015, Sofía got her star on the Hollywood Walk of Fame.

At the same time, Sofía continued to shoot for magazines, but already as a star and an actress. Sofía’s ample curves and the model’s bright, beautiful appearance made Vergara popular with men. The model appeared in the photo shoots in the male glossy magazines, and more than once became the cover story of Maxim edition. Journalists wrote articles about the actress’s appearance and Vergara's self-esteem, admiring that the woman was not ashamed of her sexuality and did not try to "look like a virgin."

The actress also participated in the voicing of animated films several times. She voiced Gabby Babblebrook in Escape from Planet Earth, penguin Carmen in Happy Feet Two and Odile in The Smurfs.

At the age of 18, Sofía Vergara married Joe Gonzalez, whom she dated at school. In 1992, they had a son, Manolo, but a year after the birth of the baby the marriage was destroyed, and the young people divorced.

In the summer of 2012, Vergara became engaged to American businessman Nicholas Loeb, but two years later, they broke up. In the spring of 2014, the actress began dating True Blood star Joe Manganiello. Six months later, they got engaged, and at the end of November 2015, Sofía and Joe got married. The wedding was held in Palm Beach, Florida.

In 2000, the actress was diagnosed with thyroid cancer. She had her thyroid removed, underwent radioiodine therapy, and made a full recovery.

Sofía Vergara succeeded as a businesswoman. In 2004, in Colombia, she designed a fashionable women's clothing line, thereby organizing more than 2,000 jobs. For her contribution to the development of the country, she received the Woman of the Year award twice. Since 2012 she has been included in Forbes most powerful women list.

In December 2014, Vergara became a United States citizen after getting a perfect score on her citizenship test.

Despite her modeling career, Sofía denies diets. Vergara believes that a woman who refuses a favorite meal cannot be happy. The actress has a perfect body, and Sofía’s weight is 64 kg with a height of 170 cm. These measurements do not correspond to modeling standards, which does not prevent Vergara from being photographed for glossy magazines and mesmerizing men.

On the other hand, the actress is sure that a woman should take care of herself. It means makeup and perfume, the actress does not leave the house without them. Sofía also does not deny that part of her beauty is unnatural. The actress increases the number of plastic surgeries and states openly that she is ready to cover her face with cement if it stops the aging process. Some fans disapprove of Sofía's opinion, and enthusiasts collect photographs with the headlines "Plastic surgery: before and after."

The actress has a verified Instagram account with 12,8 million subscribers. Sofía posts unprofessional pictures of her life: selfies, walking photos, photos with food.

In 2016, the actress voiced Miss Berrera in the popular animated series The Simpsons.

On June 17, 2017, the comedy The Female Brain with Sofía Vergara in the title role premiered in America.

In July 2017, the English-speaking audience will hear the actress’s voice in the comic cartoon The Emoji Movie. The animated film for children and adults will tell about the city of Textopolis, which is located inside the smartphone, and about the emotional smileys in it.

In September of the same year, Sofía Vergara will play a bit part in the American-British comedy film The Brits Are Coming about a couple of Englishmen who went into debt at home and fled to Los Angeles to steal the jewelry and pay it off.